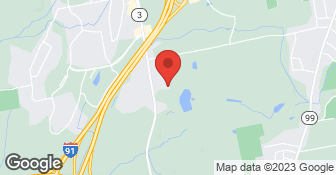 I can't recommend General Paving more highly. We worked with Bobby, one of the owners, and his entire team of pros. We had a long gravel driveway, and now it's beautifully paved. They did a fantastic job listening to our needs, proposing a great solution, and making it fit our budget. They were conscientious, reliable, did everything they said they would do on time and on budget. One of the best home improvement experiences we've had. They did such a good job that I'm kind of disappointed that I won't need their services again for another 25-30 years!

Disappointed with service, but looks ok. Completed job in time noted. When I spoke to gentleman for a quote, John, stated they would evaluate base material then determine if gravel would be needed. Apparently it didn't in their opinion. However, what I saw was a lot of sand and round stones as an old base that to me should have been removed/replaced. It tracked in my garage and house for about four weeks. Two neighbors using different contractors right now have had old asphalt removed and gravel bases put down. I think it was a very poor choice to not lay gravel down and probably an expense I paid for, but didn't receive. Also, I found that a shrub next to the driveway was burnt, don't know if it will survive. This contractor also removed a pay loader bucket of lawn on the left side of the driveway for water drainage purposes and left it just a dirt spot. I had to call John and inquire about it. He said they don't do landscaping, but would deliver some topsoil and seed. I got the topsoil.

Description of Work
The company replaced a long, old driveway. They explained in detail what would be done, how long it would take, materials to be used, and start time. The final black top was installed precisely when they promised, with 5 workers plus the owner on the job. The final product was just what we wanted. This company obviously takes pride in their work and it shows!

This company was spectacular. From the first meeting to draw out the proposal until the end, they were always in contact providing updates, always on time and really care about their work. They made sure I was happy with everything before they left and stand by their product. We were one of between 6-8 houses they did in our neighborhood. After I saw 2 of our neighbors, myself and another neighbor did ours at the same time and then their signs appeared all over town. I would HIGHLY recommend them to anyone. To note, you always see and hear stories these days about companies like this wanting a certain percentage down payment and rest after completion and there's delays, not completed on time or other horror stories. This company is so serious about their reputation and making sure customers are comfortable they did not require a down payment and only took full payment after the job was satisfactorily completed. A++ in my book.

Description of Work
Tore out existing (long) driveway, put a solid base and repaved. This included widening out the driveway and expanding the parking space.

They were prompt and cleaned up after job was completed. Overall very positive experience.

Description of Work
made existing driveway larger and paved.

Very professional and good guys to deal with

They did a great job. When I called for an estimate, they came out the very next day. I was given a timeline (once I accepted the offer) and they stuck to it. They did a great job. There was no damage to anything around the driveway so they were very careful with their work. They got it done about 2 weeks before the first snowfall and I've never been so glad to have a nice new, smooth driveway!

Description of Work
They totally dug up my old driveway and repaved it with a brand new one.

We called for a quote and Joe C was out within 3 days. Because this was a joint project with the neighbors, Joe broke the quote down into the 3 parts - the shared drive, as well as individual parts. The written quote was left with us the morning he came. We received the quote in June, accepted the contract in July, but put off having the work done until September so finances etc. were in place. There were no problems with scheduling that far out. The grading was done on Friday, 8/31 and they made a special trip out the following week to go over the project to answer questions we had before the asphalt was laid. Paving was done in one day (9/10). The work was excellent. With all the equipment and our street being a steep hill, one of the workers worked as a flag man on the street.

Description of Work
Fine grading, adding processed stone (where necessary) and 3" of asphalt on a 520' shared driveway, neighbor's additional 200' drive and parking area and our circular drive with 2 parking areas. The original driveway had never been paved and had eroded to goat-path traveling. Pits, ruts and run-off drainage areas were responsible for several broken motor mounts and u-joints. The shared drive wound through the trees, up a steep hill. At the top of the hill was a natural depression that achieved moat status with any rain. The drive(s) were graded on one day and all the paving was completed on a second.

The work was really fast, and clean. Everything was cleaned up after the job was done.

Description of Work
My driveway was redone. They pored concrete in my driveway.

THEY DID EVERYTHING THAT WE ASKED THEM TO DO. THEY WERE HERE WHEN THEY SAID THEY WERE GOING TO BE. THEY STAYED IN CONTACT WITH US. I'D RECOMMEND THEIR SERVICES TO OTHERS IN THE AREA.

Description of Work
THEY POURED A DOUBLE DRIVEWAY FOR US.

Reliable Paving LLC is an owner/operated company. We are a fourth generation business with a combined experience of over 30 years. Whether its asphalt paving, asphalt millings, or tar and chip, our team of professionals have the skills to get it done! Complete paving services for residential and commercial properties Dependable installation, maintenance and repair Reliable Paving LLC ids here to help you with paving services for your home or business. No job is too big or too small!  …

We are pleased to address you in order to present our company HELPYCLEAN CONSTRUCTION. We are the cleaning and masonry solution for your home, office or business. Call or click for your FREE estimate today!  …

All statements concerning insurance, licenses, and bonds are informational only, and are self-reported. Since insurance, licenses and bonds can expire and can be cancelled, homeowners should always check such information for themselves.To find more licensing information for your state, visit our Find Licensing Requirements page.
All skilled traders and home improvement contractors operating in the State of Connecticut are required to be licensed or registered by the State Department of Consumer Protection. License or registration identification is required to be on all advertising, business cards, signage, and contracts. You can check to see if a contractor or tradesperson is licensed or registered by going to:https://www.elicense.ct.gov/
General Information
Free Estimates
Ask for Details
Eco-Friendly Accreditations
No
Senior Discount
No
Warranties
Ask for details

GENERAL PAVING & CONSTRUCTION is currently rated 4.8 overall out of 5.

No, GENERAL PAVING & CONSTRUCTION does not offer eco-friendly accreditations.

No, GENERAL PAVING & CONSTRUCTION does not offer a senior discount.

No, GENERAL PAVING & CONSTRUCTION does not offer warranties.