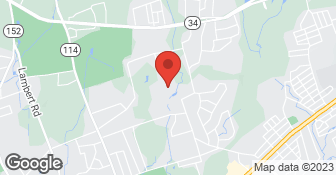 This is a long review, but I hope worth reading. It is truthful and detailed because I hope it will aid anyone in his/her search for a reliable company that "does it all". In a nutshell: AMAZING experience. I consider myself so lucky to have stumbled upon LGE Service's Website in a search for estimates. There were no Angie's List reviews for this company, and I had already contacted two other companies so that I could (hopefully) get three estimates in total. The first company was a paving and masonry company; I never received a reply to my phone calls or emails so no estimate was received for that company. The second company was mainly a landscaping company that also did walls and paving. The gentleman who came from this company to estimate was very nice and knowledgeable but very aggressive with regard to the disruption to the property: removing bushes, fence removal, grading area around the patio, etc. After the person left, he said it'd be about a week until I received the written estimate by email. When one week's time had passed I had not received the estimate so I had to email *them* and ask if the estimate was done. I got the estimate by the end of that day, but with kind of a curt note attached. Because of all the elaborate plans the person had in mind, the estimate was astronomically high and simply unaffordable. While I was waiting for the email estimate from the second company, I was surfing the web for companies that did both paving *and* retaining walls, in the hope I might get a better price if I had both done at once. I came upon LGE SERVICES, LLC and immediately on their website I saw photos of the walls they had built: Seawalls consisting of enormous blocks, decorative brick retaining walls consisting of thousands of blocks, etc. I saw that they do both commercial and residential work, so I hoped that a company used to doing large jobs would have no problem with my relatively small job. I sent an email on a Friday to the contact email addresses listed on the website and got a reply within a few hours. I had a graduation party to attend at 2 pm on a Saturday and the owner Louis Gherlone said he could come by at 11 am, prior to the party. Perfect! He was very prompt, friendly, and knowledgeable. Most important for me: he "got" what I wanted to do with the driveway into the backyard immediately. I didn't have to explain and re-explain; he understood. The next day, Sunday, I received a written estimate by email. THE NEXT DAY! We discussed a few tweaks to the paved area by email and I decided to have LGE Services do the retaining wall and driveway. I received a contract my email promptly, signed the contract, and paid 1/3 and within days (8/1/16) a small backhoe vehicle was delivered. Work began the next day and the workers (ranging in number from two to five workers per day, depending upon the tasks to be done) were friendly, efficient, and knowledgeable. Lou (the owner) mentioned that he'd come by during the job but I thought he meant he'd just be checking on the work. To my surprise, he stayed and worked with the team, cutting block and driving excavating machinery. This continued during the 4.5 days it took the crew to completely reinvigorate my home. Work was done 8/2, 8/4, 8/5, and completed mid-day on 8/8/16. The entire experience, from initial email contact to job completion took perhaps three weeks! I am astounded. Now the really great part: the work is superb. The retaining wall in particular is like a work of art. The site was properly prepared with crushed stone and fabric to allow water to filter out and the decorative block was assembled with surgical precision. The capstones were custom cut so that they fit perfectly to the "step down" matching the slope of the land down to the street. The asphalt driveway and extra extension around to the backyard is neat and conformed perfectly to the painted outline Lou put down with the workers and myself the first day of work. There were no surprises: everyone knew what was to be done and they set about doing it with a professionalism and confidence that was truly refreshing. The team also was so careful and neat: prior to calling LGE Services, I had recently repaired and painted wrought iron railings near the wall and driveway worksite. Similarly, I had the foundation of the house stucco-ed and was concerned that debris might get on the new stucco. I am happy to report that all is well. In summary: I would call LGE Services, LLC again in a heartbeat. They do everything....even driveway sealing! So I may call on them to seal my new driveway in a year. If you are in need of any of the work they do, my advice is don't hesitate to choose this company. Looking elsewhere is simply a waste of time and effort.

We have the experience and dedication to bring your dreams to reality! Specializing in masonry all tape and harscaping services. We guarantee your satisfaction and we won’t leave until the job is done right. We pride ourselves on the quality work we provide,great customer service! Call or click to schedule a free estimate today!  …

A family owned company for 27 years our experienced staff is available to assist you with all aspects of you masonry and construction needs Customer service is our top priority ,We specialize in brick work,stucco,blue stone ect..... Take a look at our gallery and contact Sammy Masonry to further assist you on your visions and make them come true !  …

Bonded
Insured
All statements concerning insurance, licenses, and bonds are informational only, and are self-reported. Since insurance, licenses and bonds can expire and can be cancelled, homeowners should always check such information for themselves.To find more licensing information for your state, visit our Find Licensing Requirements page.
All skilled traders and home improvement contractors operating in the State of Connecticut are required to be licensed or registered by the State Department of Consumer Protection. License or registration identification is required to be on all advertising, business cards, signage, and contracts. You can check to see if a contractor or tradesperson is licensed or registered by going to:https://www.elicense.ct.gov/
General Information
Free Estimates
Yes
Eco-Friendly Accreditations
No
Payment Options
Check, Visa, MasterCard, American Express, Discover, PayPal
Emergency Service
Yes
Warranties
Yes

LGE SERVICES LLC is currently rated 5 overall out of 5.

No, LGE SERVICES LLC does not offer eco-friendly accreditations.