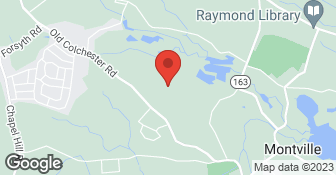 Trust our family owned and operated firm that has been serving your community with quality driveway services since 1999. We can help you construct the driveway that fits your budget and creates the look you desire.  …

Reliable Paving LLC is an owner/operated company. We are a fourth generation business with a combined experience of over 30 years. Whether its asphalt paving, asphalt millings, or tar and chip, our team of professionals have the skills to get it done! Complete paving services for residential and commercial properties Dependable installation, maintenance and repair Reliable Paving LLC ids here to help you with paving services for your home or business. No job is too big or too small!  …

At Superior Property Maintenance, we are experts in residential asphalt paving,patching and seal coating. We will exceed your expectations. We offer quality work, responsiveness, and competitive pricing. We look forward to serving you.  …

It was a horrible experience from him not sending enough workers to the fact that the job took 6 days more than waht it was suppose to. He did not answer his calls or return calls only showed up when I threatened not to pay and on top of that he was drunk! HIs brother worked for him and did the entire job himself. If I could hire just him I would but never again would I use this company!

Their quality of work compared to their $400 charge was horrible. A large crack is still open as well as numerous smaller cracks. They removed some of the grass along the edges of the driveway but missed some spots by a good six inches worth of overgrown grass. My father, who is legally blind paid for the work and left for an appointment just before they were finished. The following day he called to complain that the work was shoddy and they should come back and fix it. He was told his "driveway was crooked" and there was nothing wrong with their work and the rep promptly hung up on him. Not so nice!

Description of Work
A company rep showed up at my father's home inquiring if he needed his driveway sealed. (My father is 87 years old.) He told my father they would seal the driveway and any cracks and removed any grass that had overgrown along the edges of the driveway. My father hired them and they returned the next day. They charged $400 for an approx. 25 ft driveway.