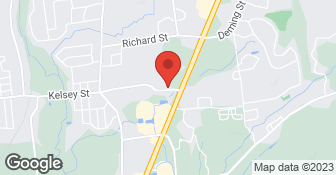 We are a family owned and operated Full Service Automotive Repair Facility, and Ct Emissions Test Center and have been serving the community for 28 years....

I scheduled an appointment and dropped it off first thing in the morning. Got a call back saying they were going to replace the plugs, wires, and ignition coils, but they didn't believe the problem was with the synchronizer. They also told me the brakes required replacement all around because only the front discs were working. I gave them authorization to complete the work. Because of all the work needed, they kept the car overnight. At the end of the next day, they called to tell me the car was running much better, but that there was still some slight squealing, and that indeed they now thought the problem was with the cam synchronizer. The cost to replace that would be an additional $500 over and above the $2200 they quoted me for the work they had already done. I told them I was disappointed because they had not solved the initial problem. I declined the work and told them I needed my car back because I was stuck asking for rides to and from work. When I went to pick up the car, I told the service manager I was upset about how things went, and he said he was sorry as well, but he thought the car would run fine, in any case, but there was still a small squeal in the engine. I paid the $2200, and left. The car drove fine, but I could hear the squeal. The brakes worked fine, and had good stopping power, and the pedal was firm. The next day I drove it to work and it bucked and stalled. When I got back home, I wrote them an email stating the car was still not fixed, and that I had paid a lot of money for repairs that didn't seem needed (spark plugs, wires, coils, etc.) The service manager wrote back and said they would be in touch, and that they, too wanted to solve the problem. A day later they he called and explained they felt very bad about what had happened and wanted to resolve the situation. They would fix the problem at no cost to me, because they valued my patronage and were proud of their reputation as a quality service outlet. They said I could bring my van in first thing the next day and they would fix it for free. I brought it in, and they honored their word and did fix the problem. They stood by their work and made good on the promise. I was delighted with their integrity, and the van now runs as if it were new! My thanks go out to Steve, the Service Manager and to the owners and staff of Mikes Auto!

Description of Work
Brought in my mini van to fix intermittent problems of stalling and engine bucking at driving speeds. I suspected the cam synchronizer was at fault, but replacing it was too much for me to do. Serpentine belt was also screeching. I also needed a brake job, because stopping the care was difficult.

After initially taking my car in to another repair place for estimate on strut replacements I called Mikes to get a second opinion/estimate. The phone call was pleasant, but a bit unprofessional in hindsight. I was pressured into giving the name of the other repair place I had been to and was told by the Mikes employee that if i went there i would be overcharged (without them even looking at my car). So I took the car in to Mikes for an estimate and was given a substancially higher estimate than the previous place. This was after waiting 3 days to get in due to their schedule. Needless to say I was quite disappointed that I was reeled in by the phone call and had to wait 4 days to get my car fixed (I ended up going back to the first repair place for the work and paid substantially less) instead of being given an honest answer over the phone that the price might be close to (or higher) than the first place.

Description of Work
No service was performed besides inspection and estimate

The work they do is great. They stand behind their work. He took the time to talk to me. He really took the time out to explain everything very well. They were very professional.

Description of Work
They fixed my battery and serpentine belt.

Bonded
Insured
All statements concerning insurance, licenses, and bonds are informational only, and are self-reported. Since insurance, licenses and bonds can expire and can be cancelled, homeowners should always check such information for themselves.To find more licensing information for your state, visit our Find Licensing Requirements page.
All skilled traders and home improvement contractors operating in the State of Connecticut are required to be licensed or registered by the State Department of Consumer Protection. License or registration identification is required to be on all advertising, business cards, signage, and contracts. You can check to see if a contractor or tradesperson is licensed or registered by going to:https://www.elicense.ct.gov/
General Information
Free Estimates
Ask for details
Eco-Friendly Accreditations
No
Payment Options
Check, Discover, MasterCard, Visa
Warranties
Yes

MIKE'S AUTO SERVICE is currently rated 4.9 overall out of 5.

No, MIKE'S AUTO SERVICE does not offer free project estimates.

No, MIKE'S AUTO SERVICE does not offer eco-friendly accreditations.