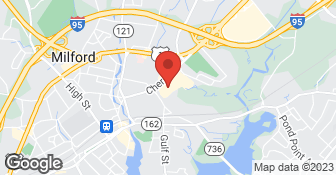 Founded in 1999 and located in Milford, Connecticut, we service the areas surrounding Fairfield and New Haven Counties. Our portfolio ranges from a professionally designed elegant bathroom remodel to a total home renovation. Our team is experienced with design, remodeling, renovation, and repairs of residential and commercial office space. Our vast knowledge and experience combined with our full-service process allow us to successfully finish projects large or small on time and within your budget. ​We pride ourselves on customer care, communication, design, and fine workmanship

Be cautious when considering a contract with Jason Bernier, owner of Bernier Remodeling and Modern Decks. Expect delays and cost over runs exceeding project budget. Our estimated 5-10 day project to rebuild a 12 x 20 deck,replacing decking and railings only, took 15 days to complete which was two full months from contract signing and our initial 50 percent deposit. Actual project construction days were limited to half work days on site which delayed completion. From day one we were offered many options to make major changes to our project scope such as expanding the deck such as changing the configuration,adding a patio, etc. We chose not to expand the project and incur additional costs. We were, however, billed for additional work to include replacing the two existing 3 step deck entry points (replacing stringers and hardware only) which was initially estimated at "about $2,500". We refused this option due to the unreasonable estimate and elected to replace the two steps stringers for less by using the existing concrete landings. We were also charged for additional work to make the step pattern match the decking pattern, and charged again to reconfigure the newly installed step railing which was now badly misaligned and approximately 12 inches higher than the deck railing. We were billed an hourly rate of $85/hour for all additional work. Insist on listing every detail in the contract to avoid unexpected charges. Jason's responses were unprofessional at times, and when I requested breakdown of additional hours and material costs as the project came to a close, he demanded payment in full prior to completing the project. As he left the project, he pointed out that the contract did not specify an oil finish sealing (although he did oil the decking underside during construction), so I oiled and finished the deck myself to include refastening the home wood clapboard siding to complete the project. Absolutely the most difficult and unpleasant contracting experience and we do not recommend Bernier Remodeling or Modern Decks.

They did a great job. The walls still looks beautiful over 5 years later. Jason was really helpful, pleasant, friendly and easy to work with, and so were the people who worked with him. They worked quickly, arrived on time, and finished on schedule. I was completely happy with their work in every way.

Description of Work
They replaced a laminate-type paneling with drywall (I think that's what it's called, the usual stuff painted walls are made of), fixed the ceiling, taped and finished it, painted it.

The service turned out better than expected. They were going to build a back stairway and move it around the corner. They were going to replace some windows too. In the processes the builder inspector wanted more work done. They also had to build a supporting wall underneath. They did some work on the chimney and the foundation. Then they also build a wonderful deck for us too. I am very pleased with them, they were wonderful and cleaned up well after themselves every day. They also locked up too. Everything looks very very nice. Jason and John were the ones that I dealt; they did a lot of extra things for me too and were wonderful. They gave me a specific quote in the beginning and then we kept adding to that. They also made some great recommendations. I wished Angie's List would let me give them an A+. They was very careful with covering the openings and getting rid of the debis. We were not there while they were doing the work, so we gave them a key and we really trusted them and they were definitely reliable. If the weather was bad, they would inform me to let me know that they would not be there. We were doing an inclosed back porch. They matched the windows with the second story windows. The stairway they did they brought in a designer and it was exactly what I wanted. The deck has a very nice view too of the New Haven Harbor. I just had a floor put down in my kitchen, and he was able to put down the same material in the new area. He also had a plumber come in and work on the toilet and sink downstairs.

Description of Work
They did general remodeling work for me.

We were very happy with the work Jason andhis crew did. They are extremely neat and take the time to do the job right. Jason listened to what I wanted and suggested options that were great. We enjoyed working with them so much we had them come back.

AM Contracting & Remodeling is a local and affordable Company. We have an A+ Rating on BBB ( Best Business Bureau) AM General Contracting & Remodeling LLC offers residential and commercial home improvement and construction services, including designs, builds, installations, repairs, remodels, and finishing. We specialize in : Deck building and repair Deck staining and replacing old boards with new ones. We specialize in New composite Decking floors. Painting Cabinet painting Floor installation  …

Licensed
Bonded
Insured
All statements concerning insurance, licenses, and bonds are informational only, and are self-reported. Since insurance, licenses and bonds can expire and can be cancelled, homeowners should always check such information for themselves.To find more licensing information for your state, visit our Find Licensing Requirements page.
All skilled traders and home improvement contractors operating in the State of Connecticut are required to be licensed or registered by the State Department of Consumer Protection. License or registration identification is required to be on all advertising, business cards, signage, and contracts. You can check to see if a contractor or tradesperson is licensed or registered by going to:https://www.elicense.ct.gov/
General Information
Free Estimates
Yes
Eco-Friendly Accreditations
No
Payment Options
Visa, MasterCard, American Express, Discover, Check
Emergency Service
Yes
Warranties
Yes

Bernier Building & Remodeling Inc is currently rated 4.2 overall out of 5.

No, Bernier Building & Remodeling Inc does not offer eco-friendly accreditations.