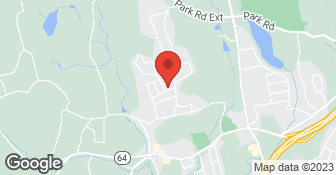 Came in the fall, ripped out old fence and put up 3 posts and disappeared for the winter. Finally showed up in late spring after numerous calls to come finish the job. We had foolishly paid almost the whole amount in the fall as he was crying about the lack of funds to buy supplies. Finally came and slapped together the whole fenced in area in one day. This is a large fenced in area. Fence is now the joke of the neighborhood. It is not straight. The planks used were not finished or sanded. Whatever he applied to the wood had mold and mildew setting in the first summer it was up. Now looks black and streaked in most places. Joints don't meet, gaps between boards, a terrible job. We pointed out the problems but he said that it was not fine carpentry but a fence. Well the old fence had fine carpentry and it was fence. He had the nerve to ask for more money than the contract because he said it cost him more to finish. Totally nonprofessional. We should have taken him to small claims court. Do not even consider using Colonial Fence in Middlebury, CT.You'll be sorry and as hopping mad as I am.

Description of Work
Needed to have a cedar fence replaced as the posts were rotting in the ground after 15 years. After 15 years the fence still looked great but was shaky. Arranged for Colonial Fence to give an estimate on the recommendation of our pool service company.

I & N Tree And Landscaping

As a locally owned and operated business we feel invested in our clients and constantly strive for customer satisfaction. Call or message us to schedule an estimate today!  …

Insured
All statements concerning insurance, licenses, and bonds are informational only, and are self-reported. Since insurance, licenses and bonds can expire and can be cancelled, homeowners should always check such information for themselves.To find more licensing information for your state, visit our Find Licensing Requirements page.
All skilled traders and home improvement contractors operating in the State of Connecticut are required to be licensed or registered by the State Department of Consumer Protection. License or registration identification is required to be on all advertising, business cards, signage, and contracts. You can check to see if a contractor or tradesperson is licensed or registered by going to:https://www.elicense.ct.gov/
General Information
Free Estimates
Yes
Eco-Friendly Accreditations
Yes
Payment Options
Check, Visa, MasterCard, American Express, Discover
Senior Discount
No
Emergency Service
Yes
Warranties
Ask for details

Fence sales, installation, and repair. No Job too big of too small.

Colonial Fence Co is currently rated 1 overall out of 5.

No, Colonial Fence Co does not offer a senior discount.

No, Colonial Fence Co does not offer warranties.

Colonial Fence Co offers the following services: Fence sales, installation, and repair. No Job too big of too small.