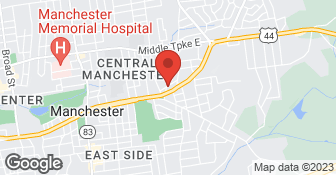 Steve and Nicole are S&N Painting. With over 20 years of experience, we have the knowledge and dedication to make your house feel like your perfect dream home. Our promise is to treat every project as if it's our own home. We are a local family - owned business. We pride ourselves on our 100% guarantee of neatness, professionalism and satisfaction. In addition to interior and exterior painting, we also offer popcorn ceiling removal pressure washing, plastering, trim work and much more! Call today for a free quote on your project and let S & N impress you with our quality guarantee!  …

Dominic's Painting and Handyman Services provides an excellent quality service that can't be beat! We offer a wide range of Handyman and Painting services. We're ready to take on your project so please give us a call or send us a message for a free estimate today.  …

Description of Work
I called Steve for an invasion into my home by a pest. He came out right away and spent several hours blocking access for bats and squirrels. He set traps and came back to deal with any catches promptly. Eventually he'll take care of some carpentry to finish the job. In thr meantime my home is critter proofed.

He came the same day I called him and was able to find and get rid of the skunk in short order. He made some recommendations on how to neutralize the smell of the skunk spray which we employed. He also installed an under ground stainless steel barrier around the perimeter of my Mom's bedroom to prevent any more critters from getting into the crawl space. Steve was very responsive and very professional.

Description of Work
Steve got rid of a skunk that was in a crawl space under my Mom's bedroom and had sprayed.

I was hearing noises in my attic, sounding like something larger than a mouse. Steve Lathrop was one of the three names given to me by the Department of Environmental Protection for licensed wildlife control folks in Manchester. I called him on a Wednesday, and he returned my call within an hour. He could have met me at the house the next day, but I wasn't available until Friday. He arrived promptly on Friday and set about doing a very thorough inspection of the outside of the house (despite it being a rainy, windy day) and the entire inside of the house, especially the attic and basement. He pointed out a few areas that might be susceptible to wildlife entry and made suggestions on how I might close them up most effectively. He identified the most likely entry point for what he suspected to be a squirrel or squirrels at the edge of the porch roof. He recommended setting traps to allow the squirrel(s) to get out but not get back in, and suggested leaving this in place for a few days to make sure all the critters were out before he closed up the hole. Between the inspection and setting up the traps, he spent about three hours that first day. He returned periodically over the next few days to check on the traps, and then, after a few days, he closed up the hole with some aluminum flashing. He also fixed some other problem areas along the porch roof line to prevent future squirrel problems, working another couple of hours. Steve Lathrop was very professional. He explained everything he planned to do and how much it would cost in advance. I would definitely use his services again!

From animal removal to repairing the damage left from the animals. S.M.L. also does handyman work and home improvements.