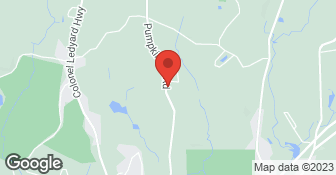 A & B Excavation and Concrete

We take great pride in our extreme professionalism, timeliness and superior customer service on every job. We develop lasting relationship so that the next time service is needed there is no question on who to call. Satisfaction is guaranteed! Call us today!  …

Contract for one month. Took 10 months!

The first time we saw him, after 5 phone calls was May 27th, he sent one worker with a jackhammer and saw to rip up concrete. The same worker was dropped off the following day, May 28th. There was still concrete left to be removed, but he didn't show up for the next 5 days. We called him and told him not to bother coming back. We are still trying to recover a $1500 deposit given to him in November 2014. At this point, on June 15th, 2015, it's nearly impossible to find another company that has the time to finish the job. All we have is an empty pool, with a ripped liner, and a patio of jacked up concrete pieces. It's an absolute disaster. We had to cancel two parties that we planned last year, for this time, because the pool is not usable.

Description of Work
He promised to start the job and complete it in the fall of 2014. The work was to rip out existing concrete patio surrounding an inground pool A new liner and stamped concrete was to be installed by May 1st 2015. He agreed to close the pool before winter 2014. After 3 or 4 phone calls in November he showed up after we just closed the pool ourselves. He brought a contract that stated all work would be completed by May 1st 2015.

Description of Work
previously reviewed this provider but they restarted their Angie's account with a new address. We had this company install a hot tub. Process took 4 months. 2 of which their bobcat sat in yard because it was stuck. The whole process was a disaster. Note: owner wants all his money up front- don't do it. He takes on other jobs. His payment was my only leverage. He never keeps his appointments. Here's an example of the quailty: one year after installation, the concrete pad under the tub is dissolving away. Called owner and did not get any call back. I paid to have someone else run.