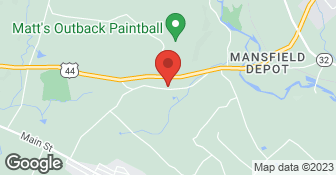 All home repairs and new construction....

The Marc Of Clean Windows

We're cleaning windows and power washing in December and January! My name is Marc Barrieau and I've been doing residential window cleaning full-time since 1991 and I still love it! I am fully insured and all the work is done professionally by myself (no employees).+ I almost always answer my phone-860 508 0447 if I'm near it - so call me! Please visit my website for more information http://www.themarcofcleanwindows.com/ I ALSO do powerwashing of houses/decks/patios etc. Lastly --i have an eBay business. I resell things. If you have ''stuff'' in your garage, basement etc that you don't want (most people do) - I might give you $$ for it! Please ASK ME! You'd be surprised what i might buy from you!  …

Im a small independent contractor ,with skills for quility craftsmanship,attention to details, and to able to give every job a 100 % start to finish, friendly, timely service and complete each job before moving to next , building a long lasting realationship with each homeowner.  …

Description of Work
Bill hung a very large picture, very high up on a foyer wall.

Description of Work
We had a large picture hanging job, high up on a wall, over a door that required a tall ladder.

We were shocked with the estimate of $5100, that was the main thing. He called that he would be here between 2-4 pm and he showed up at 2:45 pm which was good. He was very professional. It did take him a while to get the estimate to us.

Description of Work
He gave us the estimate the porch and deck work.

It went very well. Bill was punctual, provided lots of information, seems very knowledgeable. He cleaned up everything as well.

Bill was prompt and efficient. Cleaned the area up well, and does good work.

Description of Work
Framed out two walls and a door

Bill is wonderful to work with - prompt to reply, pleasant, and knowledgable. For this particular project, we needed some baseboard molding installed in our living room and we contacted Bill to come give a quote. He got back to me quickly, popped over to the house on his way home and gave me an estimate, which actually ended up being the exact cost at the end, which I appreciated. Bill is busy (always a good sign!) so he was able to complete the project ~1 week later. It came out beautifully, especially considering that he had to work with 7 1/4" high boards in a 100+ year old house with some pretty uneven floors and walls. (We've also asked him about some structural work that we need done and plan to use him for that as well.) Would absolutely recommend.

BEAUTIFUL job, very affordable, very polite and professional. Three people had turned down this job before Bill because it was so technically challenging and daunting. I had an ancient, massive, through-the-wall air conditioning unit that was 10 feet up on the interior and difficult to access on the exterior (second story). I needed it removed and a new one installed, as well as interior and exterior wall repair and proper framing. Bill came on time to survey the job, asked relevant questions, and planned everything in advance before coming again to get the job done. It looks SO, so good and we're thrilled. Left the work-site clean as well. We had some difficulty with scheduling for several weeks that had me worried before the work was done, but it was mostly because he was in such high demand.

Description of Work
Bill took out a GIANT, very heavy through-the-wall air-conditioner that was over 10 feet up. He repaired the area inside and outside, and framed and installed a new one.

If I could give an A+ rating I would. Bill does large jobs like roofing but in my case no project was too small that he did not give it his full attention. Bill is reliable, friendly, and knows his stuff.

Description of Work
Bill addressed 20 projects in my home over the course of 2 days at a cost I felt was reasonable. These included repairing/replacing woodwork, holes in plaster walls, window latches, a door knob, a bathroom fan and duct, pipe insulation, a dehumidifier, doors that would not close, cabinet assembly, repairing a cedar trellis and garden bench, an outdoor faucet, a section of gutter/downspout, and he even cleaned the dryer duct.

Bill was great. He was reasonable, honest, his job came in as he said he would and his price is reasonable. He was very polite. I felt that he was very honest and worth kind. There was a lot of eye to eye contact which was important to me. He didn't waste time chit chatting on the job like he just got to work and did it.

Bill was very accomodating. He is a good listener and works very hard to get things done in a timely manner. He is very reasonably priced.

Description of Work
Bill came out to install a walk-in closet in the master bedroom.