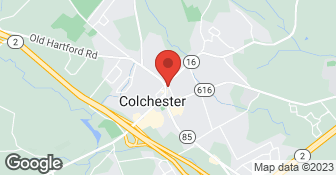 A Best Gutters is a full service Connecticut based roofing and siding contractor, installation, repair and roof consulting company that serves the residential and commercial communities throughout Connecticut and Mass. What is The A Best Gutter Difference? Expert Product Knowledge to help you choose the right solution for your home or business. Expert installation so you receive the greatest life expectancy from your investment. Quality assurance with trained, dedicated personnel that know exactly what needs to be done. We provide 5" and 6" seamless gutter installation

Professional, timely, and responsive. Peter takes pride in his company and was a pleasure to work with.

Description of Work
Had appt mento set up.no one came nor did they call us to say they couldn't make it

Slow at returning calls. Did not show up on the day promised to check an installation problem but showed d 3 days later without even telling us he was on the property.

I called on a Saturday around noon. I had some problems with gutters. recommendations were made and by Wednesday, it was complete! All for way less than I ever expected. Many thanks!

Description of Work
Did some repairs and improvements

I was so tired of unprofessional contractors that I finally started to investigate Angie's list. A Best Gutters was the first gutter service I contacted and Neal Levine returned my call promptly. The gutter cleaning was done immediately at a very reasonable cost. I don't have the leaf guards on my new gutters I had installed a couple of years ago and I will definitely consider this contractor if I decide to have them installed again. Excellent

Description of Work
Cleaned out gutters on 2 story home

Thank you [removed members name]. We will look forward to your call for service in the spring. Neal
1.0

This is a 100% DO NOT HIRE!!! A Best was brought on as a subcontractor for my roofing contractor. Their communication with the roofer was poor, he was attempting to contact them to confirm start time, but was never contacted back, they just showed up and started the job. The start was on the date scheduled, but the confirmation in advance of their arrival is such a simple thing, there is no excuse for not doing it. They completed removal of old gutters/downspouts and formed and hung the new gutters in about 6 hours. There was one downspout installed with a visible up angle on it. As we all know, water doesn't flow up hill. I had them fix it before they packed up, their fix left a different part of the downspout with an up angle. I had them look again before they left the site and again they "fixed it" but spraying some water on the roof in the area of that downspout showed it was not angled sufficiently for the water to drain and it leaked backwards out the joints. After this, I started looking a little closer. There were several places where there were pieces of the old gutter hangers still dangling from the soffits, or poking out from the edge of the roof. None of the holes in my brand new roof were sealed to prevent water entry. When I got up on the roof, I also noticed standing water where I had previously sprayed the hose 2 days earlier. I had to bring my roofer out to see how bad it was and get him to go after A Best Gutters to come out and fix it. 3 separate times I had to take time off work to meet representatives of one or both contractors at the house and 3 times, A Best Gutters tried to claim that a gallon of water standing in the gutters on the back of the house was acceptable. (It had not rained, so the rest of the house did not have water, but a simple bubble level showed that problems would be inevitable.) The final resolution was after 3 weeks of arguing with A Best Gutters, and their refusal to come out and re-pitch the gutters, my roofer had to bring in a different gutter installer to rip out the gutters that A Best had installed and start over from scratch.

Description of Work
Replaced gutters and downspouts on house and garage.

They were very busy and had to reschedule two times (couple days)They called to let us know which was no problem for us. The work they did was great,We are very pleased with the gutters and are looking to have them do the front of the house in the near future. They cleaned up after themselves and left no sign that they were even there.

I emailed for a quote request via Angie's List and either got a call back about a week later stating he was on vacation and would call me back the next day or he had never returned my call. I contacted 2 gutter companies the same way and cannot recollect who was who. I cannot attest to the quality of their work because we never used him.

(Member name removed) I tried to contact you left a message for you. If we can be of service we would like you to call is again 860 537 0819. Sorry for any inconvenience this may have caused you thank you Neal
5.0

We put the job out to bid and A Best wond the bid. Original cost was bid at approx $ 32K, but extra work was needed for replacing of rotted wood. We have had no complaints. They didn?t disturb the landscape, used care when using the heavy equipment on the lawn. Their prices were competitive. They performed the work on schedule, and finished early. They were pleasant and cooperative. It ended up costing $41,000.

The job went very well. They were professional and fast.I would recommend them to anyone seeking a professional quality job.

Description of Work
They installed new gutters and downspouts

this was the 3rd company I called. The first two I selected off of Angie's list - # 1 never returned my call. #2 never showed when he said he would and we've never heard from him. A Best Gutters I actually saw in our local paper and they came out within a couple days for the quote and a week later the job was done (based on our schedule this was perfect timing). The set up immediately to clean our gutters (we moved to the house a year ago and have no idea when the gutters were last cleaned), inspected our problem areas, installed the gutter guards and were gone. They picked up all debris as well. Friendly and customer oriented - Thank you!!

Description of Work
These folks are quick, professional, on-time and personable! I called for an estimate and they were very prompt in coming by to give us a quote for gutter cleaning and gutter guards. The scheduled the appointment on the spot and were on time the day they promised. They came in, got the job done with no mess and no problems. I would strongly recommend them for your gutter needs!

We are a local business with a goal to exceed expectations. Fast and easy scheduling with the most competitive pricing in the area. All of our techs have been trained and practice all the same systems we have in place to ensure consistent results. Safe, fast, and cost efficient services. Our ability to Soft wash exterior surfaces makes it safer on your home, buildings, bushes, vegetation and the rest of your property. This is how the professionals do it.  …

Weathertite has over 29 years of Residential Roofing Installation experience in Connecticut averaging 150 roofs per year using factory certified installers. Company management is on site for all projects to ensure that all of the stringent Quality standards of Weathertite are maintained and to address any concerns the home owner may have. Quality Assurance Survey returns from our Customers consistently yield “OUTSTANDING” rating results for our Service and Installations. Weathertite is certified with GAF, CertainTeed and Owens Corning to provide CT with the best warranties on the market. Weathertite also supplies and installs Vinyl Siding, Gutters and Gutter Guards, Windows, Doors, Decks of all sizes and Gutter Helmet. Never Clean your gutters again!!! Call today for a free written estimate.  …

Insured
All statements concerning insurance, licenses, and bonds are informational only, and are self-reported. Since insurance, licenses and bonds can expire and can be cancelled, homeowners should always check such information for themselves.To find more licensing information for your state, visit our Find Licensing Requirements page.
All skilled traders and home improvement contractors operating in the State of Connecticut are required to be licensed or registered by the State Department of Consumer Protection. License or registration identification is required to be on all advertising, business cards, signage, and contracts. You can check to see if a contractor or tradesperson is licensed or registered by going to:https://www.elicense.ct.gov/
General Information
Free Estimates
Yes
Eco-Friendly Accreditations
No
Payment Options
MasterCard, Check, Visa
Senior Discount
10%
Emergency Service
Yes
Warranties
Yes

How is A Best Gutters LLC overall rated?

A Best Gutters LLC is currently rated 4.2 overall out of 5.

What payment options does A Best Gutters LLC provide

No, A Best Gutters LLC does not offer eco-friendly accreditations.

Does A Best Gutters LLC offer a senior discount?

No, A Best Gutters LLC does not offer a senior discount.

Are warranties offered by A Best Gutters LLC?

What services does A Best Gutters LLC offer?

Are there any services A Best Gutters LLC does not offer?