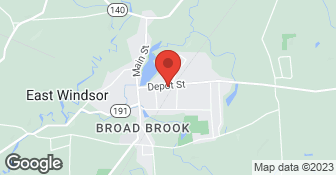 We called Fahrenheit because of a gas smell in our basement. They sent a young technician out once, who determined it was a "venting issue," ordered the wrong part, came back tried to install said wrong part, then returned again with the correct part and installed it. All for over $1000. The gas smell never went away but the tech claimed there was absolutely no leak. We called CNG who came out immediately, said there was a gas leak in a valve creating a safety issue, and charged us $300 for a simple and quick fix. A total waste of $1,000 and potential risk to our family's safety thanks to the incompetency of the Fahrenheit technicians. Based on other reviews I don't know how they are still in business. AVOID.

Could not have gone better.

Great. They fixed it all.

Description of Work
Worked on old a.c. system to recharge and fix noise in the system.

They never sealed the exhaust pipes to my furnace and when another company came to do a routine service, it was pointed out to me. I could have had a CO problem because of their slipshod work. When they came to replace the exhaust pipes and seal them properly, they broke all the struts that held up my insulation and the insulation fell down sometime thereafter. I would never deal with them again. My builder paid for them to come back to do the work even though my warranty had expired but I will never have Farenheit Mechanical do any work for me.

Description of Work
They installed the HVAC system in my new home.

The job was done fantastically, very professional. I couldn't have been more pleased.

Description of Work
They replaced my furnace and were fast and professional!

They are very reliable and professional. They are also very prompt.

Description of Work
They took my a/c apart and cleaned/vacuumed it.

Serviceman arrived on time and very polite. Explained what he would do, asked if he should take off shoes and went to work. Finshed and presented the invoice.

They are okay. They were pretty good and did what they said was in their quote. They were fair priced and their quality was good. Their responsiveness and professionalism were good too. They showed up when they said they were going to show up. I have used their services again and would use their services in the future too.

Description of Work
Fahrenheit Mechanical Services installed an air conditioning system for us in last summer.

I was very happy with them. This is an old house and the heating system was heated by a coal fire gravity circulating system. There were huge pipes. They removed all those old pipes which were enormous. There were huge amounts of steel and iron in the pipe. They removed all those and put in copper. They put in the high efficiency heating system and indirect fire hot water heater. They did it very professional and did a wonderful job. They did it when they said they would. It took them a day longer they thought, but I can’t find fault with them for that. They showed up when they said they would and they kept all that until it was done. Some contractors do start the job and they disappear which these guys didn’t do. I also have them for the annual checkup and cleaning.

Description of Work
Fahrenheit Mechanical Services Inc put in the heating system about two years ago.

The whole project went extremely well. The installation crew showed up exactly on schedule, and they stayed at it until the job was completed (it took six days). Depending on what was being done, sometimes there were several guys working, and sometimes only one. But the work progressed without any let-up. They made sure that the new hot water system was functional within hours of when the old hot water heater was removed. And they coordinated the removal of the old oil boiler with the installation of the new one so that when cold nights came we had heat. Everybody I dealt with at Fahrenheit was friendly, cheerful, competent, helpful and professional. All of the installation crew members were that way, and they were careful, too. They were careful not to cause damage, and they were careful to do the installation properly and neatly. It was clear that everybody involved in the job took their work seriously and considered themselves responsible for doing an excellent job; pride in your work is another way to put it. That started with Ken, who discussed various options with me and did the quote, and it included the installation crew and the service guy who came a few days later to take care of a few minor items (at no charge). Everybody's goal was a quality job. And they met their goal, in my opinion.

Description of Work
The overall job was an oil-to-gas conversion of our heating system - to replace the existing oil-fired boiler (a 1980's model) and gas hot water heater with a new high-efficiency condensing gas boiler and indirect-fired hot water heater. The house was built in the 1920's, so the heating pipes in the basement were huge (because they originally served a coal-fired boiler and got the heat to the big radiators by convection (no circulating pumps in those days). When looking at our situation before quoting on the job, Ken said that as part of the job, the old supply and return loops in the basement (those huge pipes filled with many gallons of water) should be replaced with much smaller copper tubing to materially increase the efficiency of the system and also to allow heat to get to the radiators quicker. The work included removing all of the massive piping mentioned above and also the existing hot water boiler and gas hot water heater, and also the basement oil tank. They removed from the property and disposed of all of the removed materials (piping, old boiler, etc.). The boiler was replaced with a Munchkin condensing gas boiler and a matching indirect fired hot water tank. New copper supply and return heating loops were installed in the basement and connected to all of the radiators. Three heating zones were hooked up and the indirect fire hot water heater was the fourth zone. Each of the four zones has its own circulating pump. The hot water tank is a priority zone (if it needs to heat more water, all other zones shut down temporarily and the boiler gives the hot water tank all the heat it can put out until the hot water is satisfied (which only takes a very few minutes). They installed all necessary miscellaneous items such as a new electric circuit to serve the boiler, pumps, relays, etc., replaced an old mercury switch thermostat with digital programmable thermostat, etc. This also included replacing the entire gas line in the basement. They took care of getting the building permit and any necessary dealings with the gas company. Basically, Fahrenheit took care of everything involved and it all was included in the quoted price.

I was so happy for the professional manner in which they conducted themselves during the job; they were efficient and thorough. They took the time to get the job done. I recommend them to anyone in my community who is looking for a good company to do work for them.

Description of Work
Fahrenheit installed a new central air unit in my 2140 square foot home in just one day.

The job took five hours longer than expected. But it was well worth it, Three men took 14 hours to complete this installation. The Techs were determined not to leave until I had heat and hot water that evening. The job went very well A HVAC tech came back the next morning to test and finish up minor wiring. The old system which was 17 years old was completely removed and disposed of. The job site was left broom clean. Everything that was written in the contract was provided. I have no complaints with this company and would highly recommend them for any heating ventilation and air conditioning work. Their prices are fair and reasonable. The quality of their work is excellent.

They did a good job. They were prompt and easy to reach. The service man was very professional.

Description of Work
They put in a new outside condensing unit for my air conditioner.

Family operation company in the greater Hartford area for the past 50 years. We employ 10 people, the subcontractors we use have been with us for many years, our licenses include all heating and cooling installations and service, we do have a trip charge for areas out of Hartford County, will give Angie's list members a 10% discount. We provide professional, knowledgable, and qualified licensed technicians.  …

PROFESSIONAL H.V.A.C. PROBLEM SOLVERS With over 25 years experience, we are a fully licensed and insured HVAC contractor. Every member of our team has been through years of schooling for the HVAC trade, followed by a full apprenticeship to obtain their licensing. We work hard to bring each customer the best possible solution to any HVAC problem or a fully professional install. We look forward to working with you on your next project. We welcome any questions and thank you for your interest.. We have 24/7 emergency service with competitive rates. We also offer free estimates for any project with a detailed list of what is to be done so there are no surprises.  …

We joined Angie's List in August of 2007 and have earned their Super Service Award every year since 2009 when they started that program. HARP Home Services, LLC is here to take care of all your heating and air conditioning needs. Whether you are looking for a free quote on a new central air conditioning system or are ready to install radiant floor heating or a new boiler for those chilly winter months, we're just a phone call (or e-mail) away. Residential & Commercial.  …

All statements concerning insurance, licenses, and bonds are informational only, and are self-reported. Since insurance, licenses and bonds can expire and can be cancelled, homeowners should always check such information for themselves.To find more licensing information for your state, visit our Find Licensing Requirements page.
All skilled traders and home improvement contractors operating in the State of Connecticut are required to be licensed or registered by the State Department of Consumer Protection. License or registration identification is required to be on all advertising, business cards, signage, and contracts. You can check to see if a contractor or tradesperson is licensed or registered by going to:https://www.elicense.ct.gov/
General Information
Eco-Friendly Accreditations
No

Fahrenheit Mechanical Services Inc is currently rated 4.4 overall out of 5.

No, Fahrenheit Mechanical Services Inc does not offer eco-friendly accreditations.