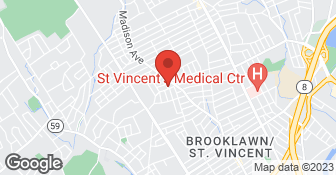 My Dreams Home Improvement is a family owned, general contractor business licensed in Westchester County and CT. We've been in business for over 10 years and every year we're improving. We take great pride in our work, every job is handled professionally, and every one of our customers is treated with respect. Customer satisfaction is our main priority, and we always put in 100% when meeting customer expectations....

Rizzo Masonry and Landscaping has been in business since 2004, building new home construction, renovation and residential improvements/maintenance. We do offer special promotions (such as 10% off any masonry or landscaping job/contract) throughout the year so don't be afraid to ask.  …

Family owned and operated for over 20 years! Providing unparalleled customer service and quality workmanship for over in the New York Metro area, Long Island and Connecticut. Call us today for an immediate response!  …

Our company that takes pride in customer service, quality of work, and complete satisfaction. Giglio Landscape Services LLC is owned and operated by John and Christopher Giglio, who have been working in the landscape business for over 30 years. John and Christopher along with their team of professionals are knowledgeable and experienced. Specializing in; masonry, landscaping, excavation, landscape design and installation. Their experience and professionalism guarantees that you're receiving the best possible job for your commercial or residential property. Giglio Landscape Services LLC is fully licensed and insured.  …

Julio and his team did a great job. They were thorough, punctual and courteous. I'm very pleased with the results and would hire them again for other projects.

Thank you [Member Name Removed] for the thrust and the opportunity for complete your project with My Dreams Home IMPROVEMENT
5.0

We decided to use Julio to completely gut and renovate our kitchen. From the day we met Julio, he was a very nice guy that looks to build a relationship, a lot can go wrong when you go this route, more than an average person can imagine. Once you tear up the floors and walls for plumbing or electrical, you really don't know what to expect. Its at this time that really puts in a lot of stress with ...

Working with Julio was a pleasure. He was very accommodating to my schedule, and pointed things out and made suggestions throughout the project. He was very professional, keeping in constant contact as the work progressed, asking questions and giving status updates. I am very satisfied with the quality of work that he and his crew provided. The project included the following: - Sanding and paintin...

Fantastic. I had several delays closing on my place, but Julio stayed in contact with me the entire time. I finally closed and we set a timeframe to get the work done. He was always very punctual and very communicative. He showed up right on time with his crew and they did a fantastic job. I think he went above and beyond in trying to take care as many of the little details as possible. This is my...

They did a great job on the drywall, tub install, fixtures, vanity and so on. Nice tile job for the tub and floor. Painting and other misc work was done very well.

Description of Work
Julio's team remodeled our bathroom. Complete gut of the bathroom.

Thank you Mr Rodriquez for the opportunity and the trust .
2.0

I did not receive a message back and called and scheduled an apt for 10/25 at 9:00. It was a no show on the part of the contractor. It's unfortunate, they may do great work but I will not have the opportunity to find out. Please refund my purchase. Thank you.

Description of Work
I purchased the remodeling consultation and sent a message that same day to My Dreams Home Improvement.

Couldn't have gone smoother, the service was great, professional and punctual!

Julio started working on our house with two bathroom remodels. His men on the job were polite, clean & very good at their jobs. We continued to give them more projects as we could see his company & employees are very capable: they did painting, carpentry, stone step repairs, moving furniture. Julio and his men have been accommodating with every request, large or small. He intuitively knows the right way to complete projects. I made mistakes along the way with material selection, he corrects any issues with no problems no hassels. He and his staff are truly good men to work with.

I hired Julio and his team for a month to do a whole-house remodel. Almost nothing went right. His disorganization, poor communication skills, overcommitment to multiple projects, and lack of motivation to appease his clients made up for what would have otherwise been mediocre workmanship. Let's start with the good. Julio's best work is in his tiling work. The only thing that went well in the project was the marble backsplash he put for me in the kitchen. Tiling work in other areas was less than perfect - the subway tile he placed in my bathroom was not even with the ground but sloped downwards, but it was too late to fix it once it was placed and by the time I had the chance to see it. He apologized for the error but did not clean up the grout his men left all over my ceiling. When I advised him of this mess, he pointedly advised me "I am not a painter" and I had to pay someone to paint over it. In another bathroom, I asked him to place groutable vinyl tile and even personally bought him the grout. Instead, he placed all the vinyl tile without the grout, and had to rip out all his work and redo it. I was hoping that more would go well in the kitchen, because lightning doesn't strike the same place twice right? My hopes were dismally disappointed when his labor took one entire week to assemble less than 7' of IKEA kitchen cabinets, intermittently rearranging them on the wall in incorrect order, only to replace them with another incorrect layout, despite the clear plans I had given him, and which his men were referencing on their iPhones. I had to personally show up at the job and correct their incorrect work at least three times throughout this process, an exhausting effort. Julio then complained to me that my project was taking too long, as if it were my fault. As part of the contract, he was also contracted to reface kitchen cabinets. Julio promoted himself as someone who "knew" how to do cabinets. I was sorely disappointed when the cabinets were delivered - the shaker paneling was hand cut with wavy lines, cabinet doors not of equal sizes, of varying depths. to his credit, he had warned that these would not look like machine cut doors, but I had no idea that his team would settle for such inferior craftsmanship. To this day, I am embarrassed by the cabinets but have little recourse now that tenants have moved in, and we have run out of time and money to correct them. However, aside from his frequent errors, the worst part about working Julio was his attitude. Balancing multiple jobs between Westchester County, Danbury and New Haven, he became incredibly stressed out and abruptly decided to take a weeklong vacation to Florida, for which he gave me one day of notice that he was leaving. I have completed multiple house remodels and have never in my life worked with a contractor who has made such an effort to chastise his client for his own poor disorganization, or who has made such an effort to pass onto the client menial tasks and procurement of supplies that are typically the responsibility of the contractor. He often dispatched me to procure at the last minute supplies he did not have, demanding that it was my responsibility to provide them. I would remind him that I was paying him to provide materials (Our contract said so), and that I did not have the expertise to select the materials he was asking for. When on occasion I would purchase something that was not to his standard ( a faucet I bought didn't have the right valve, for example), he would continue to chastise me. A month later, there are still multiple things left unfinished in the project. Half my cabinets still don't have handles on them because he ran out of the right screws for them and his team lost a lot of the handles I got them. In the interim, tenants moved in, which has made scheduling a chance to add the handles even more difficult. Julio's service and professionalism do not reflect the prices he charges. For the prices he charged, I could have hired someone much more professional, who would not have made me do so much work as a client (procuring excessive materials, constantly correcting his errors), who would have required much less supervision. Given his inferior organizational skills, he may be acceptable for small jobs, like a single bathtub or bathroom vanity install, but his prices are extravagant. After I stopped working with him, I was able to hire a local handyman with a much better attitude who did things like installing faucets and vanities for 1/3 the price that he charges. With contractors, you pay a premium for service, attitude and organizational skills. Julio did not demonstrate any of these benefits during my time working with him, and I sorely wish I had taken my business elsewhere.

Julio and his workers were fantastic. They arrived every morning and got straight to work. I'm already planning on using Julio again for my kitchen remodel!