Lawn Fertilization & Treatment
Lawn Irrigation
Licensing
Bonded
Insured
All statements concerning insurance, licenses, and bonds are informational only, and are self-reported. Since insurance, licenses and bonds can expire and can be cancelled, homeowners should always check such information for themselves. To find more licensing information for your state, visit our Find Licensing Requirements page.
Business Details 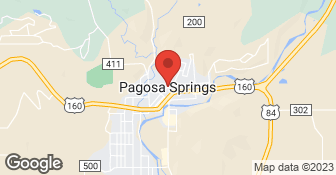 DESCRIPTION OF WORK
Payne built a retaining wall approximately 6'X30' on the bluff behind our garage that was built after the retaining wall was completed. It all went well, and we now have a wall that should last for generations.

It went as well as we could have expected. Jared and Chris came every day and worked this job until complete. Our wall will now provide a level surface for our concrete deck behind our garage. Beyond the wall there is a slope of about 35 degrees, and our wall will reduce the erosion a great deal. Payne Landscape did a great job.

DESCRIPTION OF WORK
The owner, Jared Payne and his partner, Chris Hampton came to our home and gave us an estimate for a retaining wall approximately 9 feet tall and 30 feet wide on the back of our property. They explained what they would be doing, and asked if that was what we had in mind. They told us when they could start, and approximately how long the project would take. We accepted their estimate, and they began excavating and placing drainage on time. The two owners were on the job working the entire time, and they completed the job on time. They leveled on top of the french drain that had been placed with gravel, and began placing the blocks a row at a time. After a row had been placed they filled the block with gravel and laid a mesh material between each row, anchoring and compacting it each row. They also filled behind each row of blocks about a foot or two for drainage purposes. Once the wall had been placed, they put cap stones on the top.

The job went as near to perfect as we could imagine.  They had given us a two-week time to complete the job, and even though there was one day that snow prevented work, they still managed to keep within the two-week estimate, mostly because they were on the job every day, and stayed at the job until it was completed.  I can't imagine finding another landscape company that could or would have done ...

DESCRIPTION OF WORK
Provided materials, equipment and labor necessary to build an approximate 9X30 foot retaining wall behind our garage location.  There is a bluff that was eroding at the rear of our property at steep bluff going down to the river.  Jared Payne and Chris Hampton, the principals in the company, came out and dug a proper shelf for the foundation of our wall.  They then dug the drainage beneath what would become the retaining wall, and placed a french drain in and filled the drainage with gravel.  Once they had leveled the drainage area, they began building our wall with paver stacking blocks and filled the cores with more gravel at each level, then placed high tensile strength fabric between each level  to anchor the wall to the hillside.  They compacted and back filled each level as well.  They finished with gravel between the wall and the area behind the wall for proper drainage.  Matching cap stones were placed on top of the wall that brought the retaining wall up to level with the surface behind the wall.

Jared and Chris came out as agreed, on time, and began by digging into the bank and creating a level foundation for our wall.  Then they dug a drainage canal, filled it with screening material used for french drains, put in a drain over the bluff, and filled with small rocks to be used for the drainage, and bringing the floor back to level.  They then began the rock wall by laying a layer of block...

DESCRIPTION OF WORK
Jared Payne and his partner, Chris Hampton built a retaining wall along a bluff at the back of our garage where our property drops off.