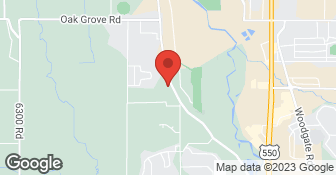 We do it all from the roof to the cellar - from the driveway to the inside. We specialize in remodels and additions....

Hello we are a family owned business! we specialize in all types of stone work and have very high quality basses! With more than 15+ years of experience we are who you need for any Masonry, Hard Scapes, and concrete projects.  …

I called the company and spoke with Dan Wilson. I described the drywall, painting, and other work I needed help with, He said those items were "exactly" what they do. I asked if they could come to my house in 3-days to review the work and provide an estimate. Dan said he would have his guy call me to arrange a site visit. I never heard back from anyone.

Description of Work
The provider did "nothing". They were a no-show.

He did a great job. He came almost immediately to give me an estimate. He promised to complete the job within a couple of weeks. Me not being used to the construction trade, was expecting a more specific time frame/date. It made me feel a bit like he had forgotten about me and then out of the blue, he called and did the job within days. He was very personable and acted like whatever I asked of him was no problem. I would use him again.

Description of Work
He built me a safe, large chicken run and connected my chicken coop securely to the structure.

Description of Work
Did not perform work, but gave good recommendation. Scheduled estimate week in advance for Saturday appointment and he forgot. Called very quickly to apologize and then came out. I would not view this as negative event.

Replacing a garbage disposal might seem like a pretty simple task for most, but neither my husband or I are experienced D-I-Yers, and we didn't want to worry about any leaks or other issues if we did not do it properly ourselves. I purchased a new disposal and Dan came up promptly and installed it for significantly less than quoted to me by the box store that I purchased the disposal from. Dan will provide free quotes and will do small projects (for the unhandy homeowner like myself) to more major construction and remodeling work. I will be having him help with replacing a shower door and fixing a leaky shower for me next.

Description of Work
Dan installed a new garbage disposal for me.

We requested an estimate to build a front porch. He did not show up for the appointment, called 4 days later and said he would be here the next morning at 10:00 am. He did not show up for that appointment either. Showed up about a week later, looked at the job, and said he would supply an estimate. We never got an estimate. I believe this type of behaviour is very unprofessional, and I would not use this contractor for anything.

I'm not quite sure how to review old Handy Dan since he did none of the work. A job that should have taken 3 weeks at most dragged on all summer. We only saw Dan when he came out to bid, the first day of work and days when his next draw was due. The only reason we have the barn we have is we were lucky enough that Dan hired a worker who did excellent (if slow) work. The emphasis being on "one" worker. No helpers, no one to run to the store for nails, etc. Dan had never worked with him before so he really didn't know if he was competent or not. Very few 8 hour days were worked and never a full 5 day week. The worker Dan hired had previous commitments so he was not able to spend a full work week on our project. Some of the other workers Dan hired to help out (like a total of a few days) were not as reliable and we often had to have them redo their portion. Ok, and then when the work was completed, Dan submitted a final invoice that was more than twice what we were expecting. We did make a few minor changes and knew there would be additional costs, but the final bill was not broken down - just a number. When we had him itemize we found things like a 40 hour labor cost to replace two pieces of flashing on the roof. 40 hours? The guy was there 1/2 hour at most. Dan explained that he was taking the word of the workers for how much time they worked. When we went over the bill, line by line, we did eventually come up with an overrun in the neighborhood of what we were expecting. Would I hire old Handy Dan again...... not in a thousand years. However, having said that, we did end up with a nice barn for a competitive price. So, if you have the patience of Job, are not in a hurry to have the work done, have a high frustration tolerance, you could consider him. I don't think he's dishonest but he is terribly disorganized. The worker we had would show up for an hour, then go to the lumber store to see what he needed that day, do the work and repeat the next day. I can see that happening sometimes but almost every day?? Perhaps if you had Dan, himself, working on the project and it was the only one he was working on it, you would be happy. You shoul d be sure to have everything specified on paper and tie the periodic draws to specific performance. I have the feeling that would have gotten out barn finished sooner. I noticed another review where they had Dan doing a kitchen or bath renewal that they were happy about - that's probably the type of thing he should stick to and not try to be a general contractor for multiple jobs.

Description of Work
Put an addition on an existing barn

Every thing looked good except caulking around bathtub, it will do but still looks unfinished. all other was fine.

Work started on time. Wallpaper removal and preparing drywall to close cracks was done. When Dan finished for the day, he cleaned up and put things back so I could use the kitchen.The next day was devoted to taping and drywall covering. It was left to dry. Caulking was done in other rooms and left to dry. Final day was painting, wallpapering in kitchen and painting panel trim in other rooms.He always cleaned up and I was able to use the kitchen throughout the repairs I am pleased with the results.

Remodel old or new homes, additions, sump pumps, driveways, roofs, flooring, siding, drywall, painting - almost anything you would ever need done to your home, we do it!