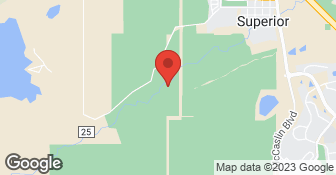 Patriot Tree Company services Louisville, Boulder, Laffayette and surrounding areas. We are a locally owned and operated business that is committed to giving the highest quality tree service and tree removal at the best price. We offer a full range of tree care services and are committed to excellence in quality of work as well as customer satisfaction. ~We have the best equipment in the industry to get the job done right. ~We have a knowledgeable staff that have the proper certifications and education. ~We offer a wide variety of services. ~We accept all forms of payments. We specialize in tree removal, tree services, pruning services, and emergency service. We offer organic and inorganic plant health care, tree planting, stump grinding, and much more. Give us a call at 720-295-TREE(8733) or contact us through our website www.patriottreeco.com to get a free estimate....

Patriot did an excellent job. Communication regarding appointment was timely. They walked me through the project the day of and skillfully pruned trees.

Great. Tree was evaluated ad trimmed for a reasonable price

Description of Work
A tree trimmed

All work done according to plan. Thank you.

Description of Work
Heavy wind damage to 40 ft. tree. They made estimate in line with insurance coverage, and performed work quickly, removing tree in just a couple of hours. Then, separately, arranged for stump grinding to below ground level.

The crew arrived on time, were professional and courteous, and did a great job of trimming all 8 trees in my yard. They also did an excellent job of cleaning up afterward.

The arborist came out and gave me a quote and told me it would be about 3 weeks. I received an e-mail a couple of weeks later telling me the date they would be out. They came out that day and performed the work very well. They cleaned up the parts of the yard where the work was done and left those areas very neat. They did everything I expected them to do.

Description of Work
I needed 4 dead Aspens removed, a couple of dead branches off of a large Cottonwood, and trimming of a red maple.

Description of Work
They evaluated my trees and told me what could be done to solve the problem.

It went very well. They were on time for the bid and on the day of the work. They did a fine job. My trees look great now.

Description of Work
Trim seven trees and remove one. Grind one stump.

It was a very tight area, very close to a fence, and they were careful to get the work completed safely and neatly

Description of Work
Removed two trees and ground the stumps

Service was excellent. Workers cleaned up all branches trimmed plus extra branches homeowner had previously trimmed.

So, far they have been so good. I have them coming back to look at one of the trees that they planted that is not doing so well and they have not completed the fertilization yet. But with what they have done so far, they have done very well. The estimator that came out was a very pleasant guy and was very helpful. We went around the house and he picked out things that needed to be done and I agreed with him on it. And then, he sent his crew over several days later and they were five in number. They worked hard all day and got it all done. The only one thing that remains is the fertilization. It was supposed to have been done last week and I sent an email to them asking whether they have done it while I was away from the house and I have not had a response back since I just sent that email yesterday. I was very satisfied with the work that they did but we still have to resolve the fertilization issue and they need to come out and take a look at the trees if they are doing well.

Description of Work
I am using Patriot Tree Company for tree services and the last time they were here was probably a week and a half ago.

They were good. I don’t remember how much they charged me for their services. I think the owner does a good job. I would recommend them to my family members and friends. I think they showed up on time. I will use their services again in the future if I need to.

Description of Work
I used Patriot Tree Company for tree service. I last used their services in October of 2011 I guess.

I thought they did a great job. They responded quick to the bid request, came out and provided a bid and did the work as expected. They were quick and efficient and reasonably priced. I would use them again!

Description of Work
I had them grind a couple of small stumps and also remove some aspen trees by sawing them at ground level.

In addition to the above they applied a deep root fertilizer to the Ash and we got another estimate for the removal of a Willow at another property as well as a new tree planting for the spring.

Description of Work
We originally had them come out to give us an estimate on trimming a very large Ash ($350) in our front yard. They also noted that a large dying Aspen was needing to be removed ($100). We had other estimates, but theirs was the best and they did not charge us an additional fee for travel--of course we were only a city over in Lafayette. We loved their work so much we had them take a look at some additional trees in our back yard--a large Elm that was causing problems with our fence , another tree that had been abused by the utility company to keep their lines clear--both of which we had removed and we also had a large honey locust trimmed. They got all this done over two days (front yard first and backyard later) and cleaned up and hauled everything away even a large amount of trimming we had done ourselves on other smaller trees.

American Eagle Tree Service is an owner/operated small business since 1990, with many years of professional residential and commercial experience. Licensing and insurance is always provided to our clients. We currently hold a tree service license for large trees in the state of Colorado. We offer free estimates and consultations to diagnose your trees and shrubs to develop the right plan of action for you. We strive for 100 percent customer satisfaction and are always on time.  …

Every job is different and presents it's own set of challenges. We thrive when it comes to creatively setting a plan to approach every job in the safest and most efficient way possible. Our goal is to complete the work you wish to have done in a manor that will leave you happier than when we arrived, and give you the confidence to call us first for any services we provide.  …

GIVE YOUR TREES SOME TLC Your search for a safe, reliable and affordable tree pruning and tree removal service ends here. Rowan Tree Care provides top-of-the-line tree pruning and tree removal services in the greater Denver area. You can count on us for the following: Tree pruning, Tree removal and Stump removal. Our fully licensed and insured team of professionals will go above and beyond to ensure that your project is completed with passion, pride and integrity. As a humble employee owned company we have a few simple goals in mind; to serve your tree care needs and provide outstanding results to client, community and environment.  …

We offer many services including~Tree Removals~Tree Pruning ~Tree Planting and much more! Check out my website to see. www.patriottreeco.com

Patriot Tree Company is currently rated 5 overall out of 5.

No, Patriot Tree Company does not offer a senior discount.

Patriot Tree Company offers the following services: We offer many services including~Tree Removals~Tree Pruning ~Tree Planting and much more! Check out my website to see. www.patriottreeco.com

Are there any services Patriot Tree Company does not offer?