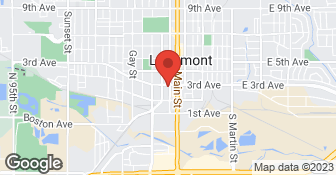 Since 2009, F9 Productions Inc. has been providing world class design services to the Colorado Front Range and beyond. We consistently deliver our clients outstanding attention and service with our thoughtful team of personable, energetic, and creative design professionals. In addition to providing superior client services, our competitive rates are, on average, 25% to 50% less than medium to large sized design firms. We are well equipped to undertake even the most versatile design projects bringing an experienced understanding of today's construction and design methods in order to create holistic solutions....

Great recovery! After having a not great start, Alex and the guys at F9 fixed my concerns. How often can you say THAT about a company or an organization? My concerns were a late response from the team, but once F9 realized the problem they were very professional and quick to make a wrong right. Would I go back to them? YES! Yes I would.

Alex Gore is very pleasant to work with. He answered our questions, helped us figure out what our best option would be, and gave us a quote for what their services would be if we stripped the existing home, or scraped and rebuilt. We don't live in a fancy Denver neighborhood. Just your average neighborhood in Aurora. Having never worked with an architect, I had no idea how they would respond to our project. I was impressed with the fact that there was no sense of "this project is too small and unglamorous to do". At this time we are unable to hire them and move forward with the plan to scrape and rebuild. We are budgeting and saving for the project (knowing the price will probably be more) to go ahead with the rebuild in about 18 months. If f9 is available then, we plan on using them to design and build our home.

Description of Work
We were looking to talk with someone about whether a remodel (partial, or completely stripping the inside) or scraping the house and building a new home would be the best option for us.

Hi [Member Name Removed], you were amazing to work with! I appreciate the detail, communication, and friendliness you brought to the project. It was great meeting you and I hope we can join forces in the future.
3.0

We don't feel that the cost was worth what we got. I think on price they're in line with other architectural firms. I think they're all over-priced, honestly. We had a previous set of drawings but they were not computer drawings, they were old. This is a hundred year old house. We had drawings that were from 1980 about so we gave them those drawings. They had dimensions and everything on them. So they had those and they had our new drawing of what we wanted to do, the layout. We had done some basic drawings ourselves but they were on our measurements that we had done, but they weren't to scale exactly. They needed to be cleaned up. Our main thing since this was upstairs construction was making sure that our walls supporting the upstairs with a shower and some heavy stuff, if we're moving some walls or whatever, were going to be adequately supporting what we're doing. It was important to have everything lined up. So we wanted our first two floors, our basement and our main floor; it was key to getting these measurements lined up. We gave him our first architectural plans. We gave them what we hoped to achieve in our small, frankly; we're just making our bathroom bigger upstairs, but then we're knocking out part of that railing and that was part of the structural question, so we didn't have creativity involved because we knew what we wanted. We had a foundation of architectural plans and with all that they still made some fairly major errors. They had these laser measuring things with a laser beam and it was still off. On pricing I think they're in line with other architectural firms but their quality and the fact they made some major measuring errors, they know that we were not very happy. The quality needs to be graded down. On punctuality, they were on time.

Description of Work
They came out to take their first set of measurements.

"How did it go?" Not great. So the offer was $99 for 3 hours of work. At that price we were not expecting A TON, so the bar was set low to begin with. F9 Was great about establishing a connection to set up a date. However, seeing as we live an hour away we offered to do a consultation over e-mail or phone call. That way our 3 hour block would not be eaten up by drive time. Within 2 weeks they reached back out to use with an idea, a good idea which we had not considered. The idea was some markups on our photos. GREAT! They also asked us what our budget was, and I quickly responded... our budget isn't that much BUT we were hoping for some more guidance; "You may want to consider saving up more as a the cost of this renovation could run you between X & Y?" Three weeks passed since the mark up email and i specifically asked for some guidance on the cost and any other items we should keep in mind when taking this project on... I have heard nothing. Disappointing.

Description of Work
Residential architect hired for my home.

Hello [Member Name Removed], Thank you for your feedback. You are absolutely right we did not give you the service you deserve. We were overwhelmed with this deal and I could not handle the volume, this is my fault. We are ending this deal so that we can give you and people like you the attention they deserve. Please let me know if I can do anything to help you out. We are finally getting our head above water. Alex
5.0

Alex Gore was very responsive, professional, and helpful. We liked him immediately and he showed a real interest in our relatively small project. After the initial meeting, Alex did the research needed to determine if the proposed addition would meet Longmont city codes and regulations. Based on the information he provided, it was clear that our lot size is too small to accommodate an addition of any reasonable size. This answered our question and we now know that adding on to our existing home is not an option. Despite the outcome, we wouldn't hesitate to contact Alex in the future for architectural/design services, no matter how small. F9 Productions gets another 5-star review on Angie's List.

Description of Work
We currently live in a two story house with all bedrooms on the second floor. Because of our advancing ages, we are exploring options that would allow us to remain in a residential setting for as long as possible. One option is to remodel our current home by expanding the half bath on the main floor to include a shower, adding a small room adjacent to the bathroom that could serve as a bedroom if needed, expanding the current dining area to make it more livable, and adding an outside deck. Since we've never done any major remodeling or new construction in the past, we needed to find out if this option is feasible given the design and construction of the house itself, as well as the lot size and current code requirements. When I saw the Angie's List special offer from F9 Productions, it sounded like this would be a good first step.

Thank you, it was a pleasure meeting you and your husband. I truly appreciate the review!
5.0

The responsiveness and professional guidance was spot on. At one point I did not take their recommendation, I came to regret that. Once again, They were spot on.

Description of Work
These great Architects did the redesign of my 102 year old West Side Tavern. We went through a lot of city code and engineering issues but they were professional, innovative and really great to work with. I would recommend them highly.

From the very start, F9 was engaged and interested in our project. They promptly and enthusiastically returned my calls and set up a site visit to see the needs of our busy family of 6 and our overall vision for the land. They were timely and flexible and easily worked with feedback to translate our desires into design. F-9 was fun to work with, yet always professional! We really wanted a well designed house that was architecturally pleasing, yet efficient and economical to build. F-9 has the construction expertise that enabled them to incorporate all of our goals into one design.

I couldn't have asked for a better firm for the design of my family's new house. This firm has an excellent sense of design that worked beautifully for the modern house I was looking for. They were wonderful to collaborate with! I appreciated their vision to make my home tailored to my family and our contemporary aesthetic. We are exceedingly happy with our home and the experience of working with F9.

Thanks [Member Name Removed], you were amazing to work with!
5.0

They have been integral in the design and ultimate success of our projects. They are knowledgable in zoning code and have helped navigate the City requirements in procuring building permits. They have a nice eye for design and material selection and the end product for our projects have been of a high quality.

Description of Work
We have worked with F9 for several projects where we needed architectural design services.

Working with F9 Productions is great. They are fast, friendly and do amazing work.

We have the experience and dedication to get the job done right! Specializing in Architect and Design services; We guarantee your satisfaction, we pride ourselves on the quality work we provide, while delivering great customer service! Call or click for your FREE estimate today!  …

We have over 35 years in the construction industry. We are licensed and insured. We offer all types of construction needs from new home construction, remodel, additions,..ect. Please visit our website www.newcastlegroupsllc.com to learn more.  …

We are a full-service building and design company specializing in post frame (pole barn) structures. Two Lone Antlers is owner operated building custom residential, commercial, agricultural, and equine buildings. We also can help with repairs such as reskinning and reroofing or renovations to existing structures. Small businesses like ours sincerely appreciate each Client relationship and the trust that is placed in our team. We respect that building a structure, no matter the size or purpose, is a large investment and we aim to make this an enjoyable and efficient process. We create buildings for every need and any size. Whether you need a small storage shed, personal garage, large facility, workshops, playhouses, or full equine arena with stables- we can work with you to bring your vision to life. Owner, George Parker, personally trains and works alongside each employee to ensure the highest quality craftsmanship and customer satisfaction. Our team prides themselves on efficiency, flexibility, premium products and custom service.  …

How is F9 Productions overall rated?

F9 Productions is currently rated 4.4 overall out of 5.

What days are F9 Productions open?

No, F9 Productions does not offer a senior discount.

Are warranties offered by F9 Productions?

No, F9 Productions does not offer warranties.

What services does F9 Productions offer?