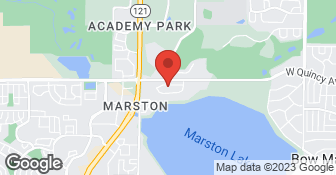 Doug was great! Came same day - fit me into his schedule. Super friendly, honest you can tell he has integrity. And he knows what he is doing. Recommend him highly!

Description of Work
Ecobee3 thermostat would not turn on the fan unless heat or AC triggered it. Doug - the owner/operator found the C wire in the wall and attached to the thermostat and then .removed the unnecessary PEK junction box from the furnace, analyzed the humidifier wiring and got everything working correctly - in about 20 minutes. He then tested all combinations of fan/equipment and helped with Ecobee3 programming. Total time start to finish a little less than 1 hour.

Description of Work
Doug, the owner, was fabulous! We saw his ad and called him up about 630pm. He was closing but asked if we would be without heat tonight and when we said yes, he agreed to stay around until we could get there( Castle Rock to Littleton) and pick up the part. He was very friendly and helpful with great advice. We will definitely use again if needed. Thanks Dave!!

It went okay, they just told me that I needed a new air conditioner.

Provided a detailed quote. Arrived at the scheduled time. Furnace was installed as expected and they left the workplace clean. Installer did not clearly explain how the variable-speed furnace operated which had me questioning whether or not it was running correctly. Robert came out and explained its operation to me including how to change fan speed when running the fan full time. This was very reassuring and I am very happy with the furnace. My only suggestion is to have the installers better informed so they can clearly explain furnace operation. Otherwise, they did a fine job. Price charged was as quoted and Robert is excellent to work with.

Description of Work
Replace furnace with a new Bryant furnace.

Our furnace suddenly just quit working... woke up early morning with 59 degree temp inside the house (that's cold), we knew something was wrong - so disappointing considering we just bought this townhome end of November last year. tried the reset button, nothing. Called Doug and he was at the house first thing the next day. He knew right away what was wrong - ignitor switch! said it happens quite so often. He did a great job! He also did the cleaning and certification in the other house we sold last year after replacing the temperature and pressure relief valve. We were satisfied then, and still is with this job.

Description of Work
October 2012 - Certified our furnace in the house we sold November 2012 as required by the buyer; after replacing the temperature and pressure relief valve that got messed up during the inspection (apparently this is something inspectors should not even mess around with as once this is released, 95% of the time it won't reseal back - you'll end up replacing it) March 2013 - replaced the ignitor switch after furnace quit working in the townhome we just bought end of Nov 2012

Doys was on time and did a great job. he was fast and efficient.

Description of Work
Replacement of parts for heating fence.

Doug quoted us on a high efficiency furnace and came in with a top brand at $1000 below the nearest competitor. I was slightly nervous about why he was so much cheaper, but I think it came down to a few things. 1.) He is not fancy - if you are looking for the guys that wear booties. But he and his team were professional craftsman. When they won our bid, they quickly installed the furnace in a few short hours. Doug only hires folks he has known all his life. He based his metrics on experience and we have had a well heated home and our heating bill has dropped by ~$80/month. So, I can't fault his mehtods. 2.) He is honest - most other contractors knew that we were getting federal, state, and local discounts and instead of passing the savings on to the consumer, just charged more. Doug did not do this. In addition, Doug was very flexible and accommodating. I asked him if he could get a permit from the city and he took care of it - apparently, a lot of homeowners skip that step, and I think that is crazy. The inspector found one problem (in the small print of the manual) and Doug fixed it up right away. I have called Doug out on service calls twice in the past year for minor problems and he fixed them right up and replaced one part that was faulty without a hassle. I highly recommend Doug and his crew. It is a small family run business that hires only local residents that he knows well to help on his crew.

We are in the business of building customers for life. Our team provides exceptional customer service in order to ensure that your experience is a great one. Our goal is to offer the best Electrical, Heating & Air conditioning services in the industry, coupled with the exceptional customer service and value you can only receive from a local, family owned business. Call us today at 720.547.8088. We provide long term solutions which protect your biggest investment, and promise to put you and what’s best for your home first. We believe that all of the electrical, heating, and air components in your home should be comfortable and keep your family safe while meeting your current financial needs and future plans. We'll work together with you and your family to repair or design and install efficient systems within the home.  …

When it comes to your home or business, you want to hire the best contractors to complete maintenance, repairs, and installations of essential equipment. With SG Services you get a trustworthy electric, plumbing, and HVAC contractor all in one. We’re able to complete work in any of these areas for both residential and commercial customers. In business for over two decades, our family-owned company has a team of skilled professionals you can rely on. Our plumbers, HVAC technicians, and electricians in Aurora, CO are all handpicked by our owner for their dedication and experience. Call us today to schedule service for your home or business.  …

All statements concerning insurance, licenses, and bonds are informational only, and are self-reported. Since insurance, licenses and bonds can expire and can be cancelled, homeowners should always check such information for themselves.To find more licensing information for your state, visit our Find Licensing Requirements page.
General Information
Free Estimates
Yes
Eco-Friendly Accreditations
No
Payment Options
Check, Visa, MasterCard
Senior Discount
10%
Warranties
No

No, Royal Comfort Heating & AC Inc does not offer a senior discount.

No, Royal Comfort Heating & AC Inc does not offer warranties.