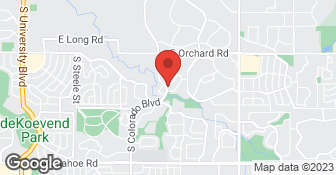 My local painting business, BILL MARKS PAINTING is a family run business with my wife, Kimberly and a small staff of employees. We are a professional painting company focused on residential painting. No sub-contractors are used, and our employees are an intricate part of our small knit company, strong of character, and skilled in the painting trade. We take the responsibility of working on your home very seriously, and we make the process easy. We take pride in the care of our work.Our prices are competitive. Every proposal is in writing with a complete detailed description of the work to be performed. We value communication through every phase of the painting project. We work with you from start to finish ensuring that your job is done right. We can assist your color selection by applying sample paints. We offer professional color consultations. And a free estimate. Allow us to set up an appointment, at your convenience to discuss the work you need to have done. ...

I had Bill do exterior painting a couple of years ago, and was extremely please with the quality of work and professionalism, so I called him to get an estimate on interior painting. As usual everything went very smoothly, Bill always checks to see if I have questions or concerns and that everything is going okay. He and the crew did a great job and actually finished ahead of his estimated schedule. I really enjoy working with Bill and his crew and would definitely hire him again.

Bill was very responsive and performed the work in a sooner than expected, amount of time. He was friendly & personable and the work was excellent. We’d definitely hire him again!

Bill and Isaiah were amazing. Many painters in our area hire subcontractors to perform the work, so quality can vary. Bill and Isaiah did the work themselves with one W-2 worker. The level of attention, customer consideration, and workmanship were outstanding. I would not hesitate to use them again. My strongest recommendation!

Bill Marks and his crew have worked on many projects for us over the years. They have helped us with interior and exterior painting, drywalling, remodeling our basement and office. They have also done other various jobs such as changing a door, putting up lights and artwork, sanding floors and even some tiling. They are professional, helpful and very trustworthy. I highly recommend them. They are always responsive and finish their projects in a timely manner.

My older home in NW Denver was pummeled by 3" hail in 2017, and after many rounds of repairs, it was finally ready for paint this summer. Nearly every contractor that came out to bid had a different idea of what constituted a proper paint job. I wanted two coats of a great exterior paint, with ample dry time between each coat, and primer in the bare spots. Bill Marks Painting was one of the few contractors I interviewed who was on board with that. (One competitor wanted to do "two wet coats," whatever that is.) I also had older windows that not only needed to be scraped and painted, but some needed to be reglazed -- which the younger contractors had no clue how to tackle. No problem for Bill Marks; he'd done it before. About a week later, his company provided a reasonable bid to paint my home, garage and fences. They had great online reviews, and I felt pretty confident that he was the right painter just from talking with him. For good measure, I also called a couple of his recent clients after driving by their homes to take a look, and they raved about him as well. So choosing this company was a no-brainer. In a few weeks, he and his crew -- among them, his talented son Isaiah -- were on the job, and I witnessed genuine, old-fashioned workmanship. They hand-brushed most of my job, as it was smaller, and their attention to detail was phenomenal. Not only that, every morning, Bill would check in to discuss what was done, what they were going to do that day and would ask if I had any questions or concerns. Wow! I am particular, and the few concerns I did have were quickly resolved. He also helped with other things, like adding an extra soffit vent. My house looked fantastic after they were finished! I should also mention that they cleaned up well every night, and even did things like clean my old storm windows thoroughly before hanging them back up. I am more than pleased and would recommend this company without hesitation. Five Stars for Bill Marks Painting!

Contacted via e-mail but never received any communication

Description of Work
Exterior Painting of my 5,500 sq. ft house

Bill returned my initial call promptly, made an appt to give an estimate, showed up promptly and gave a very reasonable estimate for the work. He and his workers showed up promptly on the agreed upon day and completed the work in a clean and efficient manner. Bill and his workers were friendly and very helpful. No wasted time -- they did their work easily and neatly. They cleaned up the area when finished. No trash was left behind. I couldn't have asked for better work or workers !!

Description of Work
I needed the side of my garage painted after a small fire.

Beyond excellent. Bill and team are reliable, conscientious, and professional. They go out of their way to help on any task even those not painting related if I need help.

Description of Work
Interior and exterior on several properties over the last 3 years.

Great - excellent work and professionalism. We'd use him again.

I couldn't believe how professional they were while in my home! I never write reviews but felt that everyone should know about these guys! My neighbors across the street even used them after us! Trying to find a company you can trust with high quality and character is hard to find and I just found one.

Kind Home Solutions is a locally owned and operated Colorado company that specializes in creating an outstanding client experience for all exterior painting, interior painting, holiday lighting, and roof replacement projects. Home improvement is necessary to keep your home looking beautiful, but the headache associated with home projects doesn’t have to be. If you'd prefer to work with a company that prioritizes you give us a call and see what we're all about!  …

Elk Horn Painting is your premier painting company for Castle Rock, CO, and surrounding areas. We have a simple mission: do everything possible to make sure our customers are raving fans of our services. From the initial conversation to the final brush stroke, we strive to make your project as simple and hassle-free as we can.  …

BILL MARKS PAINTING is currently rated 4.8 overall out of 5.