All Tried and True

Flooring Sales and Installation
Fencing
Excavating
Drywall
Concrete Driveways
Decks and Porches
Countertops and Backsplashes
Concrete Pouring and Repair
Ceramic Tile
Carpet Sales and Installation
Unfinished Carpentry
Awnings
Licensing
Bonded
Insured
All statements concerning insurance, licenses, and bonds are informational only, and are self-reported. Since insurance, licenses and bonds can expire and can be cancelled, homeowners should always check such information for themselves. To find more licensing information for your state, visit our Find Licensing Requirements page.
Business Details 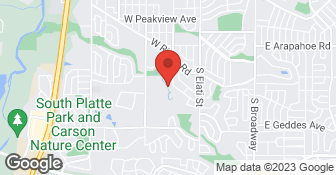 All Tried and True is like having your own "one call does it all" general contractor. From home addition to windows our licensed, state of the art technicians are ready to handle all of your in home need. "We ensure every customer receives the same level of service we would expect in our own homes"...

Fully Licensed & Insured, High Quality Interior and Exterior Painting Services Harmony Painting is a fully licensed and insured painting company serving the Denver area. We are proud of our work as a residential painting contractor in Denver. We provide highly competitive painting estimates, and use only the most durable paints. We are affordable and guarantee every project we paint. Our residential painting on your home will last for many years to come. Family owned local business. We specialize in Interior & Exterior Painting for Commercial and Residential painting. Popcorn Ceiling Removal Texture Dry Wall Board replacement

It has turned out to be a terrible experience. Stay away from this company.

DESCRIPTION OF WORK
I had a skylight that had been leaking for a long time. There was water damage on the ceiling and wall. I had them come out to fix the skylight, replace the drywall a,d put in a larger window in the back wall. They seemed to do a decent job until the next time it snowed. The leak was worse than before. They came out a couple times, but never did fix the leak. They said that I would have to pay even more than the first time to have it fixed right. When they originally came, they said that they would do whatever was needed to repair the skylight and repair the damage. They never succeeded. I had used this company for a couple jobs previously, with average workmanship. I will never hire this company for any job again.

Ask for certifications or licensing before letting anyone do the work from this company.

DESCRIPTION OF WORK
I'm not sure at all on the date above......I had Ed come over to my house and give an estimate on a fireplace installation. As he was leaving to quote another job, I mentioned to him I was a Colorado Licensed Electrician.He was needing an electrician for an upcoming job. I said I was available, and he called me up to do a job the following day. I was given a job description, and I told him no problem, it sounded simple enough. I get to his customers house and proceeded to locate an outage somewhere in the basement. The basement electrical was far from code, but I proceeded to locate why the lights in the basement wouldn't come on. After many tedious hours crawling in the attic and ceilings, I found the problem behind a switch in the upstairs dining room. The entire basement lighting was accidentally wired up to a 3way dimmer switch. When I questioned the customer as to who did some work there  lately, she said a drywall/painter from All Tried and True did the switch installation on a job done previously  by  Ed and his crew. This was a mistake an electrician would have never made, and it was a fire hazard having the entire basement wired up to the load side of a 15 amp dimmer switch. Truthfully, it would not have ever occurred to me to look behind this switch even with my 20+ years of experience. I also installed 2 medium sized chandeliers for Ed's customer, although Ed told me there was only one. These were easy, and Ed's customer was so pleased !!! The basement was all back on, the chandeliers were in, and I gave the customer some sound advise on bringing his code violations in the basement up to date. (open electrical boxes, exposed wires in light fixtures, missing devise covers, the list was endless!)  I cleaned up and left slightly after dark, and called Ed with my findings, and told him I was there for 8 hours total. He went ballistic, and asked what I usually got per hour, and I told him. I told him I would adjust my fee to something he could live with, and he said he would call me back. After leaving several messages with his voice mail and several more with his secretary, Crystal, I NEVER WAS COMPENSATED FOR MY SERVICES GIVEN TO "ALL TRIED AND TRUE. "My belief is that this company does not hire qualified personal to do the work, and as the case with me, SOMETIMES NEVER PAYS HIS HELP AT ALL. So beware of this company.