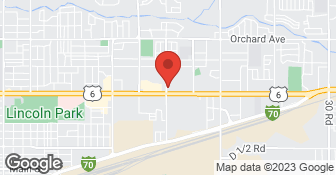 On schedule according to availability of materials. Honest professional and caring contractor, I highly recommend Faith Construction.

The finish is nice, wasn't going for fancy, just basic. The price was reasonable. Workers were nice, polite and cleaned up each day. The project took so much longer than the it should have. Ordering of materials was slow which increased time by 3 weeks. 1st told me they would be in October 1st or 2nd, but insurance work came up and they had to do that. I had moved all the furniture out, jamming it into other areas of the house. I had to keep calling to find out when and if work was going to commense. Thought I might have to start the bid process all over again, over 3 weeks later finally got started. The work done on the leveling out the floor over a bad concrete situation was well done. But, when the workers were not removing the 2nd old 1970's aluminum window, they said it was not on the bid, that's when I noticed a bust in the quote that there WERE 2 window removals and only the sliding glass door replacing one window, no new window. Disappointed they would think I'd want to keep that leaky old aluminum window and they didn't call the office about it. The new window was ordered over a week later and had to wait 10 working days for delivery. After living with it, the exterior finish trim has gaps and is cheap looking-doesn't go with the rest of the house and will have to be redone somehow with new trim similar to rest of the house. Baseboard trim was ordered AFTER most of the completion, 5 days wait. It was ordered by linear feet but didn't consider piece need. Had to wait another 5 days for the additional 5 ft. and it was installed after the carpet was in. New drywall looks good, flat, no joints showing but the texture was excessive, didn't match the lighter texture I wanted that was on one of the walls not being redone, it was the example, made my painting more difficult. After the slow start and delays I didn't want to have it redone. I spent 3 hours just on scraping some of the streaking excess before priming and painting. Did not have to do that on prior work done on the house including the example wall. Think It would have progressed better to have had a dedicated superintendent or lead that really knew my project and had some authority. Communications had to be with Paul and you can't leave messages on his cell phone, keep calling until you get him and/or call and leave a message at the office. He is also not on site except for occasional inspections, he's a project manager. I feel if there had been someone acting as a superintendent, that had reviewed the bid thoroughly before the start, the omitted window would have been noticed sooner and material ordered promptly. I thought I had reviewed it well, had been very concerned on the sliding glass door replacing one of the windows, that I missed the new window. Most construction projects usually have a forgotten item or something missed, it's a given, but prompt response is imperative. Also, several times workers showed up here, but were then sent elsewhere. Part of my disappointment in the mentioned aspects of the project is my fault for not being more demanding and having things done/redone, I tend to just fix it myself later. The third item of swamp cooler water damage repair was not done as the timing of work was after the swamp cooler was shut down for the winter and inspection and testing could not be done during the repair.

Description of Work
1-Remodel of den, 2-Exterior repair/replacement of some soffit, facia and gutter replace and reset.

I am glad that you were happy with our work. I am wish that you would have expressed your disappointment with the texture at the time of the work being done. Our dry waller take pride in his work. He is skilled to the point that he could have matched your other walls.If you had spoken up, he would have corrected any issues that you had with what he had done. We have a lot of satisfied customers so we are always busy, as we explained to you from the beginning. I am sorry that we did not complete your job in the time frame that you expected. It is rare but we do miss thing on bids and our employees are not authorized to change the job scope that you and Faith agreed on. Yes, it is hard to get a hold of Paul because he is over seeing all the jobs and is concerned about quality. The next time you have a contractor please make you expectations clear from the beginning and know that we want to know what will make you happy.
1.0

I have worked with him before and he was great!! Not this time. We talked about a date and he said he would come out and look at the job and never heard or saw him again, that was back in May, it is now September. Very disappointed in him. Very nice guy and would have been great to work with him again!! But did not work out this time!

Description of Work
He called and talked with me and that was it!!

I am sorry that this happened to you. Paul and I remember you for years ago when we were jusIt starting as a company. I am sorry that we disappointed you. I hope that you know that this is not or normal out come. Please let us know if we can do anything to repair our relationship.
5.0

Paul was great from start to finish. He got started right away and kept me in the loop the entire time as to what was going on. He took on the huge task of dealing with insurance which saved me many sleepless nights. At each point in the construction Paul was doing all the coordinating with other companies to get them in and get things finished in a timely manner. He also took great care in trying to save us money by recommending ways to do the repairs at a lower cost to us which we really appreciated as well.

Description of Work
Repair work on a rental unit. Re-carpet, re did bathroom flooring with tile. Re drywall.

Thank you for your review, we do our best to keep our customers satisfied.
2.0

Description of Work
original appointment we rescheduled for the following week to do an estimate on an exterior extensive remodel. we have a stairway that is falling down and is unsafe so we are very concerned. After meeting with the rep from Faith Const. I felt pretty confident that we would be able to get this fixed. The rep. said it was " very doable". The man said it would take about a week to come up with an estimate for the job.... That was three weeks ago and no word or phone calls from Faith Const.

I am sorry that you were not take care of like you should have been. I will be using your review as a teaching tool to our estimates and those doing the bids. I wish that you would have made a call to our office to make sure that we had all your information correct. Please accept my apology for whatever happened to your estimate.
5.0

So far we are not finished with the complete work because one of the subcontractors went out of business, but Faith has always kept us informed of steps in the project. Paul and his staff are very easy to work with and prompt in answers to any questions we may have or appointments to do work.

Thank you for your review, I glad you were happy with our work.
5.0

They found a big tree and it was infected. They made sure there was no way to save it before taking it out, but they couldn't save it. Their service was excellent.

Description of Work
They came out to check some old trees to make sure they were healthy and to take a tree down.

At Rapid Response it is our mission to meet our customers needs in a timely manner using the best practices, techniques and equipment available along with considerate communication to minimize uncertainty and inconvenience.  …

We’re Western Colorado’s full-service property damage restoration experts. Our local team of damage restoration specialists is available 24/7/365 to handle all water and property damage emergencies. From water damage, mold damage, and fire and smoke damage, to sewage cleanup, we can take care of it all. We’re dedicated to providing top-quality property restoration and unmatched customer service for residential and commercial customers in Grand Junction, Montrose, Rifle, and surrounding areas.  …

Bonded
Insured
All statements concerning insurance, licenses, and bonds are informational only, and are self-reported. Since insurance, licenses and bonds can expire and can be cancelled, homeowners should always check such information for themselves.To find more licensing information for your state, visit our Find Licensing Requirements page.
General Information
Free Estimates
No
Eco-Friendly Accreditations
No
Payment Options
Financing Available, Check
Senior Discount
no
Warranties
No

From floods to foundations if something needs repaired or remodeled we can do it. We handle multi-level fire restorations to simple drywall projects and lavish remodels.

We offer most services but in most cases the services we do not offer we often pull from our talented pool of Subcontractors.

How is FAITH CONSTRUCTION overall rated?

FAITH CONSTRUCTION is currently rated 4.4 overall out of 5.

What days are FAITH CONSTRUCTION open?

No, FAITH CONSTRUCTION does not offer free project estimates.

No, FAITH CONSTRUCTION does not offer eco-friendly accreditations.

No, FAITH CONSTRUCTION does not offer a senior discount.

Are warranties offered by FAITH CONSTRUCTION?

No, FAITH CONSTRUCTION does not offer warranties.

What services does FAITH CONSTRUCTION offer?

FAITH CONSTRUCTION offers the following services: From floods to foundations if something needs repaired or remodeled we can do it. We handle multi-level fire restorations to simple drywall projects and lavish remodels.

Are there any services FAITH CONSTRUCTION does not offer?

We offer most services but in most cases the services we do not offer we often pull from our talented pool of Subcontractors.