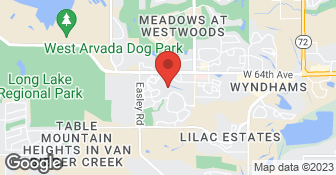 Denver Metro's premier residential landscape Design/Build company specializing in sustainable and dog friendly oases. Our award winning architect provides custom creative design services and we implement the work skillfully to build you a truly unique space to bring peace and joy outside your doorstep. We pride ourselves on great communication throughout the design and installation processes to make sure that our clients get a great landscape they will enjoy for years to come.

John has a creative mind & eye, along with knowledge of plants in our environment. we are very happy with the finished product and have received numerous compliments. John had just returned to replace a couple of plants that did not come back this spring.

Description of Work
Landscaping around the house and 4 each Berms. Installed plants, schrubs, irrigation line and decorative rocks & colored gravel.

I liked that John, the owner of Arterra Landscape Design, was so knowledgeable about plants and design and was able to explain why some design elements would work and others would not. He kept me informed of the job schedule and was able to finish the project early. His employees were always on time and conscientious. John put customer satisfaction first. I would highly recommend Arterra.

Description of Work
Redesigned small, narrow yard that was all river rock into a natural landscape design.

Mr. Majeski's site plans and design was within our budget. The work his employees performed was done very well. The workers were on time and the end result of the job was within the scope that was promised. However, Mr. Majeski does not respond well to ANY sort of criticism. If we had concerns, he would become agitated and dismissive which made it uncomfortable to feel like we could bring up any concerns. He made us feel like we were imposing on his time if there was something we needed to discuss so we just kept quiet. Our mistake. Once he was paid in full, we emailed him about 6 months later numerous times with questions regarding the planting of some shrubs and some grasses that he had planted under our bay window. We asked if he could move the grasses as they were growing very tall and getting bent and destroyed by the windows as they were opened and shut. We also had concerns about some shrubs that seemed (to us) to be dead. He said he would get back to us in a few weeks, this was in October 2014. After yet more emails, he said he would come in the spring but we told him we wanted to make sure that he looked at these before the one year warranty period was over. After a few more months with the weather warming up, we sent another email pleading him to come over to take a look at the problem and asked him to let us know what day so we could both be there. Five days later, He showed up unannounced and only one of us was home. He was instantly defensive and tried to use any excuse he could find to assure us that it was not his fault and he was not paying for this. He was rude and talked down to my husband. This is what bothered me the most. He suggested that we buy the shrubs and he would plant them. I was going to agree but after how poorly we were treated, we stood firm on our principles and felt he was in the wrong due to the fact that we tried to contact him so many times. We would rather just take care of it ourselves than have to deal with this man again. Overall, the quality of the job was ok. But dealing with this individual was just not worth it.

We hired john after talking with several designers because he talked a good talk and seemed to have a good aesthetic. We were pleased with his designs for our overall landscaping plans so we hired him to do the first project that needed to be done which was to tear out and replace the concrete driveway and patio. Hindsight would warn us to hire someone for a cheeper project for the first time. The workers showed up on time and regularly, but left a bit of a mess. On one occasion they stormed off the jobsite refusing to fix the problem John had already agreed to redo. The quality did not meet our expectations which I do not think were outrageous, but the bigger issue was John's attitude. When we pointed out that anything was wrong (and things were quantifiably wrong, as in, against code) he acted like we were idiots. He became so rude at one point, that I told him I would no longer communicate with him except in writing--through email. He eventually, and very grudgingly, improved a few of the issues, others I let go simply because I no longer wanted to deal with him. When it came time to give him the balance due, I reminded him of his promise to take the initial $500 design fee off the cost of services, at which he acted like I was taking advantage of him and trying to re-negotiate the bill. I don't know if John is a decent landscaper or not, but he's no good at concrete. I still wouldn't hire him for anything else because of his attitude and behavior of trying to turn everything back on us as if it were our fault, which I guess it was, because we hired him in the first place.

Description of Work
Patio and front area project. John is a genius with design. Job went well, his work crew great, usually good response and prompt but a few awkward communications regarding plant care, placement, and maintenance which could have been handled with more patience and explanation of what is and is not included in the contract.

They came out with the quote. We decided we didn’t need a retaining wall.

Description of Work
I got a quotation from Arterra, LLC Landscape, Design, Build to build a retaining wall and landscape.

There was no easy access to the existing retaining wall and particularly in one portion that was blocked by a structure. The digging all had to be done by hand since even a small walk-behind backhoe did not have an access to the are

Description of Work
We needed to replace a retaining wall on the back of the property. Arterra rebuilt some of the wall and replaced most of it.

Greenview Landscaping LLP is known for its eco-friendly, quality landscaping that our clients in Denver / Boulder / Northern Colorado appreciate and trust. From small, neighborhood gardens to sprawling lawns and commercial spaces, we approach every project with care and meticulous detail. We believe in building lasting relationships with our clients, getting to know them and their personal style so that we can best bring their vision to life.  …

Insured
All statements concerning insurance, licenses, and bonds are informational only, and are self-reported. Since insurance, licenses and bonds can expire and can be cancelled, homeowners should always check such information for themselves.To find more licensing information for your state, visit our Find Licensing Requirements page.
General Information
Free Estimates
No
Eco-Friendly Accreditations
Yes
Payment Options
Check, PayPal, Financing Available, Visa, MasterCard, American Express, Discover
Senior Discount
No
Warranties
No

No, Arterra, LLC Landscape, Design, Build does not offer a senior discount.

No, Arterra, LLC Landscape, Design, Build does not offer warranties.