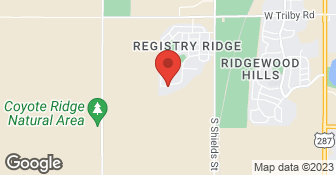 We are a residential painting service. We take pride in providing homeowners with professional quality interior and exterior painting services. The owner, Mike Leverette, has been a painting contractor for over 30 years. All of the tradesmen that woulld work at your home are employees of Windsor Painting. We do not "sub-contract" our work....

Excellent! Mike is great. The crew that was sent led by Sammy were great too. Worked efficiently and did a fantastic job. I would highly recommend Windsor Painting to all.

Mike and his crew were extremely professional, thorough, and experienced. The colors Mike helped us select were perfect, and we are very pleased with the outcome.

Description of Work
We had three room painted in our home.

Professional crew, job was completed in a timely manner. Job site was kept clean and all trash towed away.

The job exceeded our expectations. The job was completed on time. When the job was finished Mike did a final inspection and touched up a spot or two no questions asked. His crew left my home as it was when they got here. They were also helpful in moving some furniture.

Description of Work
Mike the owner spent a great deal of time going over colors and ideas. He provided us with a quote His crew showed up on time and were very curtious. He provided all the materials to complete the job.

They finished the work quickly. They are good at what they do. They do what they say they will. They are very easy to work with.

Description of Work
They painted the entire outside of my house. They also did patching before painting.

We needed one additional room to be painted which wasn't done when we did it originally. I looked at them along with some others when we were looking for somebody to do it. Robert Leverett himself was very careful; some of the others were less so in terms of edging and things like that. When they took some plates off some electrical outlets, they were not really careful, but it depended on who he had hired to do work. I guess the price was part of the decision why I went with them. We had them come back a couple of times which they did, but it shouldn't have been necessary. Their punctuality was okay; they were punctual.

Description of Work
Windsor Painting Inc. painted the total inside of our house.

We pride our company on reliability, great communication, integrity and quality work. We are experts in our trade and will do our best to keep you as educated as we can on your particular task or project. We look forward to earning your business!  …

We have the experience and dedication to bring your dreams to reality! We guarantee your satisfaction, and we won’t leave until the job is done right. We offer interior and exterior painting options/trim. Call or click to schedule a free estimate today!  …

Windsor Painting Inc is currently rated 4.7 overall out of 5.

No, Windsor Painting Inc does not offer a senior discount.