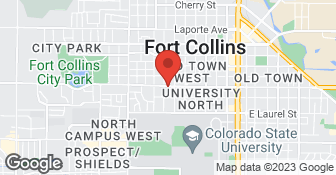 Alpha Plumbing is a local plumbing company with over 20 years of experience that strives for 100% customer satisfaction. Quality work is our main focus. We specialize in service, remodel and new construction plumbing projects. **ALL DISCOUNTS ARE ON LABOR ONLY**...

Jaime and his team at Alpha Plumbing are awesome. Will defintely use them again.

Work was done quickly and professionally.

Jamey was probably the best tradesman I have ever come across in Fort Collins! The service was outstanding. He responded immediately and got my water back on quickly. The work he did was exceptional! I would HIGHLY recommend him!

Everything went quickly and easily. Jason(?) explained what he was doing. He answered all of my many questions. Being a senior citizen and having been scammed by previous local plumber I was very grateful that Jason was so willing to listen to my concerns and answer my questions. I will definitely call on Alpha again.

Description of Work
Checked inlets to new washing machine, Added devices to stop water hammer. Checked water pressure and special tank off of water heater. Checked all 4 toilets. Used snake on all of them.

They were out in November I think. I think they charged $129. I don't know what happened but a week after they said what it needed, nothing was done. So I called them on it and they said somebody dropped the ball. Well I ended up ordering the coupling on Amazon, so I did that myself, and then they came and put it in, my faucet now hums. So I called them on that and they are suppose to come out but they haven't. They could have ordered the piece. I shouldn't have to track them down about it. They're okay to work with, I mean they're friendly.

Description of Work
I used Alpha Plumbing. I had a faucet that leaked and it needed a new coupling.

It went very well. Owner of the business came out personally as some of the problems were very complex. He spent extra effort to get our boiler, which had been run without water, get back on line. Would have been much more profitable for him to call it dead and quote a replacement unit. Husband loved coming home to everything scratched off his "honey do" list (at least the sub-section titled plumbing)!

Description of Work
We had multiple plumbing problems and a boiler that would not function.

Very thorough, friendly, knowledgeable. Took their time to take care of everything we wanted. Answered questions, gave us pros and cons of each option that we were investigating. We felt very comfortable with them.

replaced part of a pipe that had a leak, they were professional but we were somewhat unhappy with the outcome as the pipe still shakes a bit when water is flowing through it.

Description of Work
replaced part of a pipe that had a leak, they were professional but we were somewhat unhappy with the outcome as the pipe still shakes a bit when water is flowing through it.

It went well and so far everything seems fine. We are glad we called Alpha Plumbing as they really knew what they were doing since this water heater is a little different from the usual kind. Jamie and his crew were very nice to work with and quite knowledgeable too. Just had new flooring put in and they were very very careful while removing and replacing water heater. We would use them again if any other problems.

Description of Work
Took out old water heater and replaced with new one. Water heater a special kind with vents which is why it cost so much more.

Their service has gone very well so far. Their estimate was very reasonable. They are punctual and responsive. The technicians are personable and knowledgeable. They are also friendly. The project is not complete only because we are waiting for a contractor to finish up their job. It was very easy to schedule their service.

Description of Work
I hired the company to do the plumbing in the basement.

PureWater Plumbing and water purification specializes in water treatment and water heaters. Rather you want a traditional tank water heater or a tankless water heater we do them all. We also offer state of the art water treatment systems with a lifetime warranty. Don't be had by unlicensed people doing work in your home. We are licensed and we pull permits on every job so you know the job is being done right. With over 50 years combined experience PureWater Plumbing and Water Purification is your one stop for all your plumbing needs. We are a locally owned and operated business and we spend little in marketing and advertising so we can pass those savings onto you.  …

At New Frontier Fence LLC we take pride in doing quality work. Our goal is to make your vision a reality, with any custom or generic fence project. We now offer Skidsteer & Excavator services! Contact us today for a free estimate. God Bless  …

HVAC, general repairs, maintenance, in business since 1982. Family owned and operated. Some other stuff about things a few other things.  …

How is Alpha Plumbing overall rated?

Alpha Plumbing is currently rated 4.8 overall out of 5.

What days are Alpha Plumbing open?

No, Alpha Plumbing does not offer a senior discount.

Are warranties offered by Alpha Plumbing?

What services does Alpha Plumbing offer?

Are there any services Alpha Plumbing does not offer?