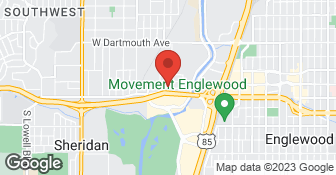 Don's Garage Doors serves the greater Denver metro area, we are a family-owned & operated business, we have 15 employees, NO subcontractors. Honest & legit company....

They did an excellent job replacing my garage door and responded very quickly when my spring broke. The spring was covered by the manufacturer's warranty and they assisted with the claim and only charged me for the labor. I highly recommend them for service and complete replacement.

Kelly is the consummate professional -- exceptionally knowledgeable, consultative, and all-around great to work with. He really sought to find the solution that was right for us, even though it wasn't the most expensive option they offer. He finished all of the projects in one day with great precision and expertise, and was a true pleasure to work with. We have never been this excited about a garage door.

Thank you for posting this nice review. Kelly works so hard at what he does, he'll be grateful glad you noticed. We are very happy to have him on our team.
5.0

I bought a new garage door opener from this company and had some issues which ended up being the fault of the "operator" and not the product. I was assisted by one of the company's service representatives (I believe his name was Brian). This person was great. He went out of his way to assist me and make sure all of my issues were resolved prior to departing. The company is fortunate to have such a helpful knowledgeable employee.

Robert did a very professional job. We were very pleased with the results.

Called on a Thursday and had an appointment window on Saturday morning. Mike called in the first half of the window when he was 20 mins out. Was done quickly, explained everything and have a nice smooth operating door once again! Listed B for cost as I just don't know how Don's compares to others at $100 for the service call plus parts. Would definitely hire again!!

Description of Work
Door became troublesome and difficult to open and close. I disengaged the automatic opener but that got old fast.

My 25 year old Stanley door opener died and was too old to repair. Brian Wilson the tech explained three options for replacement from cheap to expensive I chose the middle quality LiftMaster Belt drive model and Brian had it installed within an hour. It works great and is quieter than the chain drive Stanley. Brian was professional, efficient and does top quality work. I'm very please with the work.

Called, were able to come out and fix the same day. Great work.

On Monday, I received a call saying a team was in my area, and could stop by. Jordan and Bryan called when they were 20 minutes out, and arrived on time. They diagnosed the switch problem as a bad circuit board. Rather than sell me a new circuit board or motor assembly, they suggested using an extra remote, which they hung on the wall. They reinforced the damaged door, making a strong weather tight fix to get us through the winter. That gives us time to budget for either new panels or a new door. After tuning up both doors, they were done. The bill was the original $ estimate! No wonder Don's Garage Doors has over 350 A ratings on Angie's List, and countless Nextdoor raves!

Description of Work
One of our garage door wall switches stopped working on Saturday afternoon, although the car remote still opened & closed the door. I called Don's to get it checked out. The dispatcher scheduled the work for Tuesday. She asked if there was anything else, as there was a trip charge which included a tune-up. I told her we had two damaged top door panels from a previous closer malfunction. And a second single garage door that needed a tune-up. She explains a second tune-up would be half price.

They are phenomenal! The owner came out and did an excellent job. I will definitely recommend them and absolutely use them, again.

Great. Tech arrived at promised time and then followed up to provide requested estimate.

Description of Work
We needed an estimate for repair.

Johnson Garage Doors is a full service garage door company. We instal new doors or operators which all include 10 year warranties. Broken door? No problem, our techs specialize in fixing any problem you have. Most repairs come with 5 year warranties.  …

As Certified Garage Door Technicians & Trainers from the International Door Association I.D.E.A -we are a family owned business dedicated to providing quality work. When it comes to any of your garage door needs we are guys to call/ We will quickly have a trained service technician come to your home or place of business to repair or fix your garage door with all the up to date manufactures parts which we keep fully stocked on our trucks at all times. If you door needs any custom or special ordered parts we can have it with in 2-3 weeks. In addition to repairs we also do full new garage doors installations. We accept cash, checks, and all credit cards . We also leave full invoice receipts with product and labor warranties. Call us today for a free estimate, we look forward to serving you! Check us out on our website, Yelp, BBB, or HomeAdvisor!  …

No License Required for Trade
Insured
All statements concerning insurance, licenses, and bonds are informational only, and are self-reported. Since insurance, licenses and bonds can expire and can be cancelled, homeowners should always check such information for themselves.To find more licensing information for your state, visit our Find Licensing Requirements page.
General Information
Free Estimates
No
Eco-Friendly Accreditations
Yes
Payment Options
Visa, MasterCard, American Express, Discover, Check
Senior Discount
no
Warranties
Yes

Don's Garage Doors is currently rated 4.9 overall out of 5.

No, Don's Garage Doors does not offer free project estimates.

No, Don's Garage Doors does not offer a senior discount.