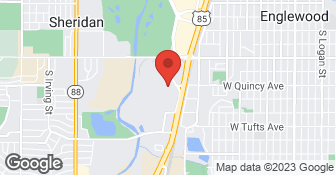 Family owned and operated, Dean’s Sprinkler Service and Landscaping has installed over 7,500 residential irrigation systems in the past 29 years, not to mention numerous systems for Sports Fields, Schools, Churches, Parks and varied Commercial Operations. Dean’s also prides itself in designing, installing, and maintaining award winning landscape projects. We are fully licensed and insured, offering custom designed Sprinkler Systems, Irrigation Repairs & Modifications, Major Landscaping & Hard-scaping, and Over-Seeding for turf restoration. History: Founded in 1981, DEAN’S SPRINKLER SERVICE AND LANDSCAPE has been family owned and operated for over 29 years, serving the Denver and greater Denver areas. At Dean's Sprinkler Service and Landscaping, “Pride” is not just a word it is how we do business! We take pride in our workmanship and our customer service. The commitment to “quality-installation” and “excellence in service & repair” has earned Dean’s Sprinkler Service and Landscaping a “A+” rating with the Denver Better Business Bureau, as well as also being recognized as one of the top 3 residential sprinkler companies in the Denver area,* and top 50 in the nation. Company Philosophy: “Our commitment to the customer does not end merely at the installation, but extends to continued service, repair, and customer education. Dean’s Sprinkler Service and Landscaping is an active advocate of water conservation and proper irrigation design for water conservation and landscaping control....

we are here for your lawn needs. services we provide include bush and tree trimming, landscape design, lawn maintenance, weed and unwanted plant removal, garden design, and general lawn needs.  …

Call us today for all your concrete needs!  …

Full service asphalt construction contractor with over 14 years of experience.  …

On time, and a little over budget, as an HOA fencing requirment was not known at the time of quote

Bad, damage to my existing water feature, no response from company for follow up, just a bad experience overall.

Dean's Sprinkler was great! After promptly providing us with a design and quote, we scheduled the service for as soon as the weather would allow. The workers were on time every day, worked all day, cleaned up after themselves, were polite and professional, and asked us questions along the way if needed. They also made sure to always close our backyard gates so our dogs would not escape when we let them out. The entire project took five days. They installed a new sprinkler system, drip line, edging and rocks around our entire house, bushes and plants, and did a beautiful ring around our tree. I would highly recommend this company to anyone needing sprinkler or landscaping work.

Description of Work
Company provided us with a sprinkler and landscape design, and a quote. We went with everything on the design, full sprinkler system and drip line, and landscaping.

I have to say first off, that service fluctuates with these guys. I've had both good and bad experiences over the years. One year, they sent some guys who just wanted to tear out my system and sell me a new one. I felt it was two guys thinking they could put something over on a woman. When I complained, I was later told that those guys had been fired. The next experience was good, with them creating a box in the back yard to access all of my zones more easily, and the pricing was reasonable. All was well until Fall of 2013. I called for my regular winterization. When the fellow was done, he charged me $80, when in the past I hadn't paid more than $60 or $65. There was no warning about this dramatic rate increase. My feeling is that with a regular customer, they should have told me on the phone that rates had increased before sending someone out. I paid, but was not happy. As mentioned, their service and pricing is sometimes OK, sometimes not. Makes me wonder if the owner isn't always as involved as he should be.

Description of Work
Came for winterization of my sprinkler system, which they'd been doing for me for a number of years.

This was one of the best lawn sprinkler system experiences I have had in the 16 years I have been in my home. The team of 2 technicians arrived on time after calling to let me know they were on their way. They examined all of the zones and repaired or adjusted a number of sprinkler heads. They took their time, listened to my input about past dry areas of the lawn, made suggestions and kept me informed of every step of the process and did not do any work before explaining what they wanted to do and how much it would cost to do the work. They were fast, efficient, thorough, professional, and the price was very fair for the amount of work done. I plan on using Dean's again for all of my sprinkler system needs.

Big Mistake!They assured us that they would pull a permit (for which they charged us) but never did, they did demolition on a Monday, and did not pour until the following Monday, stating they had no access to concrete.When the bid was given, we were told it would be a two day process, demo and pour. Not at all the case. Also, had much difficulty in having them move two sprinkler heads for landscaping that we were to do. The technicians were too busy having a chat session with each other and therefore it took well over two hours for a job that they bid out at 1 hour. And then, didn't even complete the entire project.Made several calls, emails etc to the company expressing our concerns and wanting either a permit or reimbursement thereof and were never called back or given any type of assistance with our concerns.

They are top drawer. They did a wonderful job, worked very hard and got it completed in 2 days. There isn't a better crew around.

Description of Work
They installed a new driveway.

David was the manager from Dean's in charge of the services provided for my lawn. He did not charge more than he quoted me during his free estimate. His work was meticulous. Before aeration started, he had all the underground lines tagged, and made sure not to hit any of them. He completed the work with his team in three visits (including estimate visit, the line blow out did not need to be done until later in the season). When I asked him some questions about how his team had adjusted the valves to my system after the blowout of the water lines, he responded professionally to my e-mail, less than a day after I sent it. David will also be following up in the spring to make sure that all the work he did is on track to deliver the results we are looking for. Not many landscaping services offer viable non-gmo, non-chemical fertilizer and herbicide options, but Dean's Sprinkler Service and Landscaping does. This is important to me, because I don't want to expose my toddler (or the local bee population) to nasty chemicals when he is playing in the yard. Dave also gave good maintenance tips re the proper height to trim the grass to minimize weed infiltration, how often to mow the lawn etc. I fully expect to see my lawn looking a whole lot better this summer, and highly recommend Dean's Sprinkler Service and Landscaping.

Description of Work
Aerated my entire yard front sides and backre-seeded entire yardapplied organic fertilizer to entire yard front sides and backapplied organic herbicide to address weed problems front sides and backreplaced several malfunctioning sprinkler headsreplaced a broken sprinkler line in the front yardrepaired and reset the zone controller/ watering schedule, to comply with new watering restrictionsmaximized watering efficiency with strategic watering times of dayblew out all sprinkler lines before the winter and properly adjusted valves to prevent line freezing/damagewill be following up in the spring at no additional charge, to make sure that nothing was damaged during the winter and to fix any damage if found/verify that everything is working properlyResponded promptly to my e-mail questions with solid answers and professionalism

They were friendly, kind, and considerate. They knew what to do and told me what was happening. I was satisfied with their business. I would give them a B+

Description of Work
They put in trees, shrubs, and a new irrigation system.

Kim came out on June 22 to assess my needs. She was very nice. Walked with me to look at both front and back yards. First talked about the brown patches in my lawn. I asked if I needed a new sprinkler system or just a repair. She told me the sprinkler system people would have to come out & assess. Proceeded to talk about landscaping wants & needs. She came up with some possible ideas. When asked about my budget, I said that it would depend on whether the sprinkler system needed replacement or just repairs. I said I would be willing to spend at least $3,000 over the cost of repairs and would have to adjust if the entire system needed replacement and might need to go with a 2 year plan with landscaping the second year. I asked for a 2-tiered estimate: 1) the cost of a nicely landscaped yard and 2) the cost of a superbly landscaped yard. She then took measurements and told me it would be 2 weeks before she could get back to me. Four weeks later, I called the company and asked about my estimate. Very soon after that I received an email saying she had been really busy. The estimate contained a rough explanation of where some plants would go with names of plants, most of which were unfamiliar to me. Only one estimate was provided. When I emailed back that I was disappointed with her service, she told me that my (low) budget had restricted her to just a few plants because replacing my sprinkler system was going to cost at least $3,000. She said that they do not repair sprinkler systems, only replace them. There was never any correspondence from her to confirm our conversation during her on-site assessment in June. I will say that since I was unsure about what I wanted/needed, my requests were vague and my budget an approximation at best. Kim took no responsibility for any miscommunication. With better communication, I would have been very willing to increase my budget (again, going with a 2 year plan). I would also have welcomed a chance to speak directly with the sprinkler system people. I feel that a lot of the miscommunication would have been avoided with timely emails.

Description of Work
A representative from Dean's Landscaping came to my house to discuss services and provide an estimate for landscaping and sprinkler repair/replace.