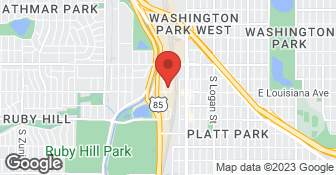 Summer 15% Discount on fertilization and treatments. We are a full-service tree care company providing tree maintenance and plant healthcare solutions for your property. Our main focus is to provide our clients with a professional, modern approach to tree health. Award winning....

They are very knowledgeable, they take their time to do the job, and he's a certified arborist.

Description of Work
They did some work at my evergreen trees.

Once Tree Pros has proven that they are number one in the field. For years, they have tended to my property. The crew is always professional and courteous. They never fail to leave my property looking great. If you want the best, contact Paul Goin at Tree Pros.

Hey, these guys accommodated my schedule & did a great job. Even gave me some handy tree tips. I did get several quotes beforehand; Tree Pros was not the least nor most expensive, but Paul was very prompt & attentive. Juts had a good feeling they were on the ball.

Mike and his crew of Justin, Evan and Greg did an amazing job. The trimmed a large tree in my front yard and a second fruit tree in my backyard. Both trees look beautiful. Reasonably priced too. The guys were very professional and really cleaned up after themselves - and I'm picky! Highly recommend. Also, had a second team out for yard cleanup. Again, they did an amazing job. I love these guys!

Estimate came very quickly. Technician called following week and gave me a time "window." Tech arrived in time window and performed the soil injection quickly. Got several estimates (not all through Angie's List) and selected Tree Pros for price and timely injection from a ISA certified arborist. Arborist was knowledgeable and walked the talk. I recommend these guys and will use them again.

Tree Pros is as its name states highly professional and experts at there work. The large silver maple tree removed was in a tight area between two houses. The tree was taken down with expert care to the surrounding area. The workers were experts..professional, knowledgeable, courteous and the pricing excellent for a tough job. I will not hesitate to call on Tree Pros for any other needs that I may have.

Paul was terrific. I had a tight space where I needed a tree planted to provide some privacy. I received 3 estimates/consultations and Paul was the most professional and thorough in his presentation. After I hired Paul I was working on a very tight installation schedule and he was able to squeeze me in. The workers showed up right on time, were polite and did a great job with the installation. Very happy.

Good people. Good work ... im not exaggerating when i say there may only be three leaves they didn’t clean up after trimming two massive trees. On time, quick, very fair price after watching the work and what they had to do. As long as i have trees and tree pros is around Ill use these guys ... simple as that.

Needed to have 3 trees cleaned up and one removed that was dead before it fell over during a storm. Crew was punctual and completed the job to my satisfaction in a very timely manner, took about 3/4's of a day as all trees are 20+ feet tall. Cleaned up after themselves and even left some mulch from the stump grinding for me to ensure the hole was filled as the ground settled around where the stump once was.

The work mentioned above was at different times and different crews. ALL of them were excellent in all phases of the work. Communication, clean up, quality work. I wish I could give an A+. Prices were actually lower than some of the other bids!! The $300 I mention above was for the root removal and the huge bush. I have 3 big Ashes that needed trimmed back badly and all 3 totaled $800. I had bids as high as $1100 and a couple of years ago I had a bid for just the bush and it was $400!

At first I wasn't sure, as we got a very high quote. Then I got an email from the senior arborist, and he sent a revised quote which seemed really fair. He suggested waiting on some of the work until summer, and did other work later that week. I'm happy with the work done.

Description of Work
We needed trees trimmed and one taken out

I chose Tree Pros based upon their great reviews on this site - and the detailed and knowledgeable estimate they provided after visiting the property. They trimmed five trees, and did a great job with fantastic clean up - it was hard to find a single stick left over afterwards. I'm sure that they are not the least expensive option, but the quote was reasonable and worth it for the quality and peace of mind.

Description of Work
Removal of ash tree, branch removal from honey locust. Further trimming of the locust tree will be done when it begins to bud (it's a late bloomer).

Great, Mike and his coworker did a great job. They knew how to properly trim the tree. Cleaned up nicely.

I communicated with them from WA to do a job in Aurora CO and the entire team was very helpful. They were able to schedule the job within the 2 days I was in CO. The junipers were cut down, stumps ground and they left the place looking nice.

Paul answered a few questions I had about the bid very promptly. They showed up on time, even though a recent snowstorm had felled many branches in town, including a few on the trees to be trimmed. They were very efficient, saving firewood for me, as requested and cleaning up nicely after the job. They even disposed of a couple of large limbs that had fallen during the recent snowstorm. They showed up at 9am and were done before 1pm. They went (relatively) quietly about their work and the trees look so much better. I couldn't be happier with the work they did. Thanks for a job well done.

Description of Work
Complete pruning of 2 3÷ story trees They looked great afterward..All dead branches gone and nicely reshaped. Price was right in line with other companies

It went really well. Easy to work with and did everything I had asked.

Description of Work
We had almost every tree and bush removed for a yard make over. A 25 foot evergreen removed and had a bunch of stumps ground.

The office scheduled them right off the bat. I loved everything about them, but I thought the price was a little high. I got a couple of other bids, and went with somebody else. There was no charge for the estimate. I found them on Angie's List. They communicated well.

Description of Work
I had them come out for an estimate.

There was some confusion on the start time, but when they got here they were efficient, fast, and cheerful. They explained what they were doing and answered all questions. Everything was cleaned up beautifully before they left.

Description of Work
I had two tall trees--a flame oak and a honey locust--trimmed. I also had two tall, shaggy junipers cut down and run through a wood chipper. They did a great job. The honey locust looks wonderful. The flame oak had been damaged by hail recently and by tough winters. They trimmed off all the dead and broken limbs and tried to make it look less lop-sided, since most of the damage was to one side. It came out looking much better than I had hoped. There's a limit to the number of healthy branches that can be removed at one time.

They got here on time, they're doing their job, it looks like they're going to get it done. They're not done yet, so I couldn't say about quality. They showed up on time when they said they were going to.

Description of Work
I am having a tree in the back removed, right now.

I had to cancel the scheduled service because my dad came into town and cut the tree down himself while I was at work.

Description of Work
I didn't receive services but I needed a tree pruned; the business responded to my inquiry within 24 hours and had someone come look at my tree the next day. I was throughly please with their responsiveness and professionalism. I will call them next time the tree gets out of control again.

Valerie and Paul Goin saw the urgency in our situation and expedited our tree removal. The crew showed up promptly and, with great expertise, managed to bring the tree down without any damage to property. The even cleaned up so thoroughly that nothing of the tree remained when they were finished. We will definitely use them again, and really appreciate their responsiveness.

Description of Work
We had an urgent situation. A very large dead sumac was falling over and was leaning heavily on the fence between our property and the neighbor's. Worse: Some very large branches were hanging over the neighbor's backyard. We were worried the tree would come down and cause property damage, so we needed help quickly.

Showed up on time and did the job well.

Description of Work
They removed a large cottonwood tree, ground out the stump/root system and later filled in the hole with topsoil.

At summer Landscape & Irrigation Services LLC we have 10 years of experience in landscaping. giving you the best of outcomes every time. Our employes receive on going training to provide you great service whit the best of the best materials on the market. Paradise at your fingertips, text us and see  …

We do all types of landscaping jobs from cutting your grass, to putting up fences and making your lawn look its best. Our work speaks for itself! All of our customers are shocked and really happy to see their yards when we are done. Our jobs are guaranteed and you will be really happy at the end result. Call us for a free estimate today.  …

Tree Guyz and a Gal

Greetings and salutations welcome to "Tree Guyz and a Gal" tree removal company. We are a forward thinking and innovative company that dose nothing but tree and bush work. Our clients and their trees needs are the most important thing to us. We offer a full range of service of tree and bush service such as full removals, trimmings, stump grinding, emergency limb elimination and so much more. We pride our selves on coming from a "pow-line vegetation management" company aka we use to maintain and keep vegetation a certain distance from the power lines in the mountains and in town. We are duel female and male owner-operated and a locally owned small business & we pride our selves on not having all the huge and oversized equipment that some offer. Just us, our ropes and chainsaw in your trees and bushes. So give us a chance and we'll come running with a pep in our step and need to complete the job excellently!  …

Tree Pros Inc is currently rated 4.8 overall out of 5.

No, Tree Pros Inc does not offer a senior discount.

No, Tree Pros Inc does not offer warranties.