Plumbing
Drain Cleaning
Sewer Cleaning
Kitchen and Bath Remodeling
Septic Systems
Licensing
Insured
All statements concerning insurance, licenses, and bonds are informational only, and are self-reported. Since insurance, licenses and bonds can expire and can be cancelled, homeowners should always check such information for themselves. To find more licensing information for your state, visit our Find Licensing Requirements page.
Business Details 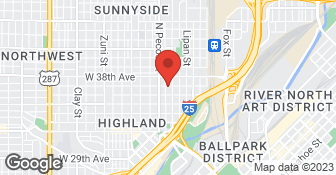 We are a Drain Cleaning , Sewer Repair Company . We service Denver Metro area .

We Specifically Focus in Sewer repairs at low cost Price, need a full line replaced? we have the best competitive pricing out there and we don't overcharge like most plumbing companies do.

Here at Tipping Hat Plumbing, Heating & Electric our focus is Good Old Fashioned Service. Plumbing, Heating, Cooling, Drain Cleaning and Electric service that is done right, that will last and skillfully completed by one of our hard working, courteous service specialists.

Can I give 0 stars? I used Dwight for a few years and recently he stole my $3050 deposit. 5 months after I paid him the permit was never pulled and he even sent a screen shot of the money he was going to refund me -- then cancelled the payment! He still owes me money, the work isn't done and he's stopped answering phone calls and texts. What kind of jerk does this to a single mom? Small claims cou...

DESCRIPTION OF WORK
Fan installed and electrical as part of bathroom remodel.

Avoid this company at all cost ! They were not able to fix our problem and the employee that they sent seemed clueless quite frankly. They still charged us 175$ for a clogged kitchen pipe that was not fixed. The owner promised to use their waterjet system to fix the pipe and then deduct the 175$ amount from that cost. However then they "disappeared". The owner stopped answering our calls. We final...

All was completed timely, and we had a very short window and poor weather conditions, and it was a job well done.

DESCRIPTION OF WORK
I was selling a client's home and it was discovered the old clay pipes in the front yard to the street connection needed replacing.

I would strongly recommend against working with Drain Genius. This company was hired to do a spot fix on my home's waste water pipe, and the process started fine, but when the project turned out to be a full replacement, instead of a spot fix, things went downhill. I was told that the bigger project could still be finished that same day, but when I showed up at 4pm no one was to be found, there wa...

It was great, Nick and Dwayne were friendly, helpful, and fast. I was a little taken back at first by the $200/2 hour minimum up front, but it was completely worth it and I will be using them again in the future. There was time left at the end after their repairs and they weren't sprinting out the door, I had questions about putting a bathroom in my basement and Nick took the time (since it was al...

DESCRIPTION OF WORK
I had a leaking/broken line on both my refrigerator and dishwasher. They replaced one line and sealed the other.