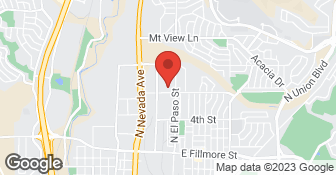 Asphalt Paving Services is a Asphalt and Paving contractor in Colorado Springs, CO. We care about asphalt - it's in the family. Asphalt Paving Services has been serving Colorado for over 25 years. Our experience and passion for quality and professionalism is the core of our business standards.” Asphalt Paving Service is family owned and operated and has been servicing the area since 1985. We serve all of El Paso and Teller counties and offer a two year full warranty on new paving construction. Black is the new green. Asphalt is 100% recyclable. We are your driveway design experts. Call James or Jerry for a free quote today!...

Hello! We do driveways, sidewalks, patios, stamp, color concrete, and even more We have over 18 years of experience Call for your free estimate!  …

Armor Asphalt Paving is a locally owned and operated asphalt paving company in Colorado Springs that has been serving El Paso County since 2015 with 5 stars on Google. We specialize in asphalt driveways, pothole repairs, and parking lots. We take great pride in the quality of our work and our exceptional customer service. If you are looking for an asphalt paving company in El Paso County call Armor Asphalt Paving today! We offer hot rubber crack filler, two different kinds of commercial grade sealer to protect your asphalt, asphalt millings, gravel and hot mix asphalt. As always our estimates are FREE! For more pictures or information you can always go to Instagram: (www.instagram.com/armorasphaltpaving) Our Website: http://armorasphaltpavingco.com  …

I requested a quote through Angie's list and I was contacted about an hour later. They provided a quote a few days later and completed the job 4 days after that. They did a superb job and I would definitely recommend them to anybody.

It was our pleasure! Thank you for your business and we look forward to a life long customer like you. Thank you for trusting us with your asphalt driveway.
5.0

Excellent communication, quality and value. James and his crew exceeded our expectations. I believe they went above and beyond for us. I am no expert, but I do no know how they could have done any more for us.

James did a great job on our two circular driveways, one in front of the house and one that wraps around the back of the house. He responded quickly and was very professional. I appreciated that he halted the job because of the rain and waited until he knew for sure that the pavement could cure correctly. He's a class act. Thank you, James, for doing a wonderful job for us!

He does a great job. We have used him 4 times. Someone ran over it and he came back to patch it right away.

We hired James and his son Jerry to replace the gravel areas around our 3-car garage and basement walkout with asphalt. I was thinking about doing this for years, and after I heard two co-workers of mine talking about the great job they did I decided to pull the trigger and hire them. They prepared the ground the first day and put down the asphalt the second day. I had pretty high expectations based on the word of mouth reports and Jerry & James didn’t disappoint. They listened to all of my requests and did everything perfectly. While waiting for a truckload of crushed concrete to arrive James spent the time doing some grading in the skid loader of areas they weren’t even paving, an extra bonus for no extra cost! These guys cleaned up and left the area spotless. Can’t recommend them enough. On a side note, I was very impressed with the quality of the equipment they use and how well they maintain the equipment; this tells me they are professionals and pay close attention to detail which is reflected in the quality of work they do.

Description of Work
Replaced gravel areas in front of 3-car garage and basement walkout with asphalt, 4.5 truckloads of asphalt to do the job.

[Member Name Removed] . It was great working with you. I am glad you are enjoying your new asphalt~Jerry Dawley
5.0

Needed a little touch up work which took some time to get done, but overall the job was well done and the crew was very friendly.

Description of Work
We surfacing long asphalt driveway with oil

The Cliffnotes version: Dawley Asphalt did a fantastic job and I will use them in the future! Job description (I wish more reviewers would specify this!): we have a 200+ foot driveway that flares out near the house to accommodate a 3-car garage plus turn-around. I received 5 other estimates that ranged from $900-2300, but 3 out of the 5 were in the $1100-1400 range. When I first called Dawley (Late June), I was discouraged because the woman who answered the phone told me they were so busy it would take 2-3 weeks to even come out for an estimate and they would probably not be able to schedule the work until Sep-Oct time-frame! However, Jerry Dawley called me less than a week later and got an estimate to me the following day. We then had the work done the last week of July. The work was fantastic! We had them seal the cracks and then re-coat the entire driveway with sealer. They arrived on time (even called to say they were on the way), and performed the work professionally. I was quite surprised to see it only took them about 2 hours to complete our somewhat large-ish driveway. The work was very neat and the driveway now looks great again. I had probably waited too long to get this work done, but I will now not hesitate to get my cracks filled and driveway coated more frequently. I won't gather estimates next time -- I'm calling Dawley!

[Member Name Removed], It was our pleasure! Thank you for the work. Real really appreciate it. With out our costumers we are nothing. Again, thank you!
5.0

Dawley Asphalt arrived on time the crew was ready to go to work. They took care when working close to garage doors and any flower beds and sprinklers. They kept me informed on the work schedule. They kept the area clean made sure when they left that area around new asphalt was clean and loose material was sweep up. The new paving looks great

Description of Work
Dawley Asphalt just finished removing our old driveway and repaved it. Their work was excellent and their crew professional. They took their time working around flower beds and sprinkler heads. The clean up after the job was also great. They answered all questions and gave useful advise on maintenance of the driveway.

Thank you [Member name removed]. It was a pleasure working with you. Enjoy your new driveway.
5.0

I called Jerry the owner pretty late in the summer and asked to have the work done. Because he was booked solid, he told me that he would do his best to get to me by the Summer's end. In early October, he informed me that he was sorry and had not forgotten me. A week later he asked if he could schedule my work in a few days and of course I said yes. He came the 16th of October and did the job. The results were better than expected. A very clean and efficient job was done. I am very happy with the work he did. However, my biggest surprise was when I got the bill for the work. $0.00. He only asked that I write a review. Jerry is a very personable and professional young man that takes great pride in his word and his work. I will call Jerry for future work, and I strongly recommend him and his company to anyone needing repairs or any asphalt work done. Thank you Jerry.

Description of Work
Filled about a dozen cracks that were very wide spanning my drive way with a modern textured asphalt product.