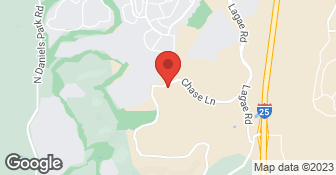 They took our money, started then abandoned the project and disappeared. BEWARE! Robert Law is not to be trusted!!

Waited to write this review for almost a year. While we are thrilled with the results, it was a bumpy road getting here. House was purchased as a foreclosure and the yard had been neglected for years, so we needed to redesign both front and back yards - two large spaces (corner lot) that were completely overrun with weeds, infested with bindweed and buckthorn, crumbling retaining wall, etc. The good news was this was essentially a blank canvas where we could create anything we wanted - bad news was wife and I had zero background in landscape design and only a vague notion of what we wanted, so we were looking for guidance and vision, and preferably a one-stop shopping experience rather than juggling multiple contractors. Daniel's Landscaping was one of several contractors we consulted, and Rob's personal charm was key to our decision to hire them. Met with him several times in April/May 2016, worked out a design and a budget for everything but fencing (not in their scope of work.) Feeling good about the decision, we put down a deposit and got on their calendar for July. Had lots of communication in the beginning, with Rob directly as well as his design team who was very helpful, but then ... radio silence. When I reached out weeks later just to touch base and confirm we were still good to go, Rob said 'Oh, did nobody tell you?' (never a good sign) 'Daniel and I are no longer in business together.' (gulp) We were panicked for about 24 hours, as it became clear we had fallen through the cracks and neither Daniel nor Rob had realized it. After some sleepless nights and a lot of back and forth with Rob, we decided to go ahead with his new company rather than Daniel, and got rescheduled for August. Once work began, it went quite fast and without significant hangups. The guys on the ground were tremendous workers, both in skill and effort. Arturo in particular takes great pride in his stone work, and talked us into several upgrades (most at no charge), things like stone garden boxes instead of wooden rail ties, and covering the cement walkway in stone. It's clear he likes to show off his crew's skill, and we didn't mind. We had another contractor timed to arrive same week to replace large sections of fencing, and both crews coexisted without incident. The only problems in execution of design involved some miscommunication about the retaining wall, as I just happened to be home and noticed one worker had misunderstood the design (a 'thumbprint' we had suggested to give the mulch/stone area some character) and was off by a few feet in location. While they took down the stonework and rebuilt the wall, the impact was that there was not enough materials to finish the very end of the retaining wall, which sat almost-but-not-quite-completed for a few weeks as they waited for a shipment. In hindsight, if that's all that went wrong with the actual project, we can't really complain. There was some confusion with the billing, as Rob had somehow 'lost' all our plans, revisions, and estimates over the summer due to the breakup. To his credit, he was up front with the issues he was dealing with, and we were satisfied with how much we paid and what we got for our money. It was just unnecessarily stressful. Bottom line: our backyard used to be an embarrassing eyesore, and is now the best room in our home. Nearly all but one of the plants survived and are now thriving, the patio looks great, the sod is managing well enough (**** dog urine!) - we are very pleased with the results and the value we received. That said, communication with Rob is hit and miss at best (my wife found it more difficult to get straight info from him than I did) so you need to be vigilant and proactive, and keep all your paperwork.

Description of Work
Complete redesign and overhaul of front and back yards including sod and sprinkler installation, expansion of back patio and front landing, mulch and stone ground covering, tree removal, retaining wall, and various plantings.

The initial conversations seemed to go well, but we were asked to pay the full price up front (~10k!!!). Nearly 6 weeks went by without a date scheduled for the work to begin and almost no communication. Turns out they ordered the wrong materials and had to start over again. We asked for a complete refund, which we have not yet received.

Description of Work
Hired Colorado Outdoor Living Design & Sales to redo our backyard and add a space for a hot tub.

Initially, we were pleased with Rob's work and the final design of our project; however, after several months, we realized that the work was sub-par and our list of warranty repairs continued to grow. Unfortunately, we've had an extremely unsatisfactory experience with him in regards to the completion of this warranty work. We have two dead trees, three dead bushes, several broken path lights, problems with our sprinkler system (including three drip lines that are completely broken). Many of these issues were identified almost immediately after Rob completed the job, but we agreed to wait until spring to address them. Despite Rob's constant assurances that the work would be completed "this week" or "in the next several days", over two months have now passed and every appointment has been missed without even a phone call to notify us. Rob has now stopped returning phone calls or texts. On the rare chance we do hear from him, he blames his crews for "lying" to him about when he will get the work done- as if he is not the owner of this business and ultimately responsible for carrying out the contract with his customers. Bottom line, this has been one of the most unprofessional experiences with a contractor we have ever had. Lots of promises made; very, very few kept. I would advise anyone considering him to look elsewhere for their landscaping needs.

Description of Work
Landscape- front and back yard, including lightIng, sprinklers, and hardscape

After contacted with several companies, I selected Rob's Colorado Outdoor Living for the project. I was introduced to Rob via a friend who has his backyard landscape completed by Rob. After being in Daniels Landscape for decades, he recently split out to form his own company. Different from other landscaping guys I talked to, Rob really spent time with me to understand what I wanted, and gave his suggestions after listening to me. Also, his proposal and drawing are much more in detail. It took about 4 days for his workers to finish everything in my backyard. We are very happy with the result, and like to recommend him to our friends when they need to find a landscaping contractor.

Description of Work
The project is to finish a empty backyard with a flat-stone patio of 250 square feet, several trees and plenty of perennials.

It went terribly! We created a very specific plan of what was to take place, that they later modified on their own. They asked for half of the money down, which I agreed to. They were late or didn't show up at all on several occasions. They scraped the side of my house during the work, which they later denied. They broke a brick that they then lied about, saying they glued it back in. I have video showing how loose it still is. They installed a faulty sprinkler head that they replaced but they didn't program the sprinkler systems. I had to do research to learn how to program it myself. I have weeds growing already, the sod is not growing back in the time frame they gave me. My patio have several chipped pavers that aren't level. They didn't have the paver color I wanted, but said they had a close match that turned out to be completely different from what I had originally wanted! They have been consistently unresponsive and have even tried to blame me for the poor quality of their work. There are over 2 weeks past their projected finish date. They continually asked me for the remainder of my payment before the job was done even though our contract specifically stated I wasn't to pay the second half until the full job was completed. To top it all off they took the down payment and signed the contract informed me that they aren't even the company that they claim to be on Angie's List, which sounds very fraudulent! The project manager of Daniel's business, Arturo Gonzales, is the owner of Outdoor Design Colorado, which is company they later disclosed to be.

Masterful Masonry has the experience your project requires. We are committed to providing quality workmanship and superior customer service on all of our applications. At Masterful Masonry, we strive to maintain our reputation as a high quality, very service oriented company. Call us today!  …

Family owned and operated business based in Parker, CO. We specialized in residential irrigation audit and repair, small landscape install, yard clean up, and yard care.  …

Residential Landscape is Family Owned & Operated since 2002. We are Licensed, Insured & Very Dependable. We provide services throughout Denver Metro Area since 2002. We have a small group of employees between 4-6 people and start one job at a time until finished. Our service including; build all type of retaining walls, patios, water falls, sprinkler and sod installation, perennials & annuals bed design and special in Design & Build. Please check out our website for more information. Our website is residentialscape.com.  …

Colorado Outdoor Living Design & Sales is not a lawn maintenance or snow removal service. However, we do have close relationships with other vendors and companies that offer those services, and will gladly refer you to a reputable company that offers these services.

Are there any services Colorado Outdoor Living Design & Sales does not offer?

Colorado Outdoor Living Design & Sales is not a lawn maintenance or snow removal service. However, we do have close relationships with other vendors and companies that offer those services, and will gladly refer you to a reputable company that offers these services.