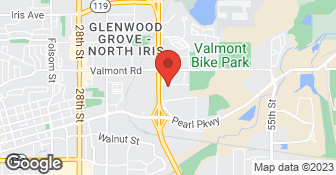 Our mission is to be a provider that brings back the personal touch with our customers. We will build a relationship that will last a lifetime after you see our quality work. As a locally owned and operated business we feel invested in our clients and constantly strive for customer satisfaction. We won't leave until the job is done right! Call or click to schedule an estimate today! We are located in Fort Collins and are able to service homes within 20 miles. If the home is located outside of our radius, there will be an additional charge of $50.  …

Hello and thank you for looking at our page! Here at Urban Grows we specialize from everything from lawn maintenance, to landscaping/urbanscaping, to garden maintenance and much more. Our commitment to responsible yard maintenance is what sets us a part. We use all electric power tools, so that means while we are working you do not have to deal with the noise or smell of gasoline. As well as we use local and organic fertilizers for your lawn or garden. If you want to see the difference that our services will do to your lawn feel free to give us a call or email. Free estimates!  …

We have the pleasure of taking issues off our clients hands. While we have vast experience in many areas of construction, it truly is about how we can tend to your needs. Taking great pride in any project we take on for you.  …

She arrived on time, did a wonderful job and was great to work with! I am very satisified and wouldn't hesistate to call them!

Description of Work
Washed windows (inside & out).

They were very quick to reply to my email and were able to schedule an appointment immediately. Quick, friendly, on-time service. Good price. Would recommend to everyone.

As always, Allison and her team were great! Showed up on time ands did a great job. Friendly and professional. She even reattached a piece of loose roof flashing! Will continue to use this company at least as long as Allison is employed. Scheduling is a little difficult with business owner - it can be a day or so of voice mail tag until scheduling can be arranged. I believe he used to have an office scheduler who was very pleasant but may have retired. Still he's very friendly - just may be a little swamped.

My gutters were cleaned and inspected with minor repairs completed by Allison of Aspen Service. The job was done quietly, efficiently and with little to no mess for me to pick up after. Allison gets my vote for professional, friendly, intelligent and knowledgeable service- loved her. She was able to provide a level of service I did not expect and gave me a full report on the state of this old 1916 house's 30 year old gutters, answering my many questions and suggesting steps for the future. My son has typically performed this function for me and he is now off the payroll for gutter cleaning- it made a difference to have an expert provide the service. I will use this company again, despite their higher pricing among gutter companies. They performed the minor repairs without charge so perhaps the higher pricing takes into account inspection, minor repair and future considerations for maintenance.

I really enjoy working with Aspen window cleaning. This is the second time we've used them. They are prompt and professional and the price was the same as 2 years ago. My only quibble is that a few of the windows had streaks and missed spots.

They arrived on time and got right to work after I gave Allison a tour of what needed done. They worked quickly but were very thorough and asked pertinent questions.I asked for a business card because I'd use them again and would recommend to others.

Description of Work
Crew of two, Allison and Keith, washed windows and doors including storms and screens, inside and out.

From the first time I called to ask for an estimate, Aspen's staff were courteous, responsive and thorough with their bid and a description of their service. The day of the cleaning, the technician arrived on time and cleaned the windows thoroughly. All weekend after the cleaning, I kept remarking to friends who were visiting that looking out my windows was as if I were there no window in place at all! They were that clean. I am grateful for their service as it saved my husband a task on his and quot;honey-do listand quot;. THANK YOU, Aspen Window, I will use your services again!

Description of Work
Cleaned all windows in the upstairs portion of my home.

I haven't had my windows cleaned before, so I don't have a baseline against which to compare. Overall, I would consider the service above average, but not a slam dunk for repeat service. Everyone involved was pleasant and professional. Patty did a fantastic job fitting me into the schedule according my needs and the weather. Communication was great on this issue. Two people showed up to do the work. One was 10 minutes early and other right on time. There was some miscommunication about whether track cleaning was included in the price, and to their credit, they ended up doing a basic wipe-down of the window tracks for the quoted price. (Though I would have been happier if less water/mud had been left in the tracks.) I'd note that they usually clean the screens for the quoted price, which they didn't have to do in my case since I had brand new screens, so that was to their benefit. (Prior to the track cleaning discussion, no credit had been offered.) The quality of the cleaning itself I would consider a B, though I have admittedly high standards and am very detail oriented. My windows hadn't been cleaned in a long time, and several required scraping and steel wool, especially on the west side of the house where the prevailing winds blow the most dirt. In addition, several windows have scratches on the outside and condensation between the panes (broken seals), which I obviously didn't expect them to address in any way. There is no doubt my windows are much cleaner than they were before, but I can find some missed spots and the occasional un-wiped edge on virtually every window. Some of these are admittedly tiny, but others I can see from across the room, especially on the windows in my garage. They were happy to clean any spots that I pointed out, but I didn't have time to check window thus ended up letting many slide. In short, scheduling was excellent, the people were pleasant and the cleaning was above average, but not so impressive that I'm likely to recommend them to friends without qualifiers.

Description of Work
Aspen cleaned all windows in my house, inside and out. 18 fixed windows 15 single hung windows 6 sliding windows 1 sliding door

Excellent, go no further if you are searching for a professional, affordable, and excellent service! My scheduling with Michael was easy and he provided me all details needed up front (weather conditions, costs, expectations, etc.). Nate did the service and was polite, professional, and had an amazing attention to detail - as a result, my blinds looked brand new once finished...this was for a rental unit and the blinds were VERY dirty prior to the cleaning that Nate performed. Thanks Michael and Nate for great service. I'm 110% satisfied.