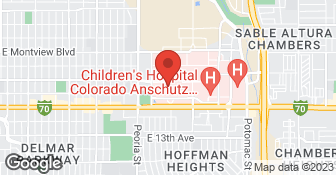 The hospital consists of a 400+ beds and an emergency department that is a Level II Trauma Center, which means it set up to either treat or stabilize all emergency conditions. The hospital will also stabilize and transfer children who are under 12-years-old or who weigh less than 88 pounds....

Description of Work
Back therapy

He is fantastic. They are knowledgeable and excellent as diagnosing. He is a wonderful human being. I've been going to him for 10 years.

Description of Work
I went for continuing care for the cardiovascular system.

I have not had surgery yet. I will review after surgery. I like that there will be another opportunity to ask questions at the pre-op appointment. I did not get info on post instructions because a decision had not been made on wether or not I would proceed at this institution.

Description of Work
I have a painful unstable spine condition for which I had seen a previous MD. I was uneasy with the first opinion and called an acquaintance in the business. Dr. Cain was highly recommended by her and her peers for my spondolythesis. Dr. Cain explained everything thoroughly and did not rush thru the exam. However, he is very busy and the surgical date was not as soon as I wanted. He demonstrated exercises for me and I felt he was very empathetic to my situation.

Dr. Weyant is the cardio-thoracic surgeon who removed my cancerous lung lobe in May 2009, and has been monitoring me ever since. I was very impressed with his skills as a surgeon, and he continues to impress me with the care and compassion he shows each time I see him for follow up. I have nine more months to go until my "five-year" milestone, and Dr. Weyant has been supporting me every step of the way.

My experience with Dr. Gordon has been very good, aside from the time it takes to get an appointment. Again, this is a byproduct of his fantastic reputation, so it is what it is. During my first appointment, he performed a very thorough exam of my hand/wrist, included a number of X-rays. He was unable to conclusively diagnose the issue, but on his suspicions he sent me for an MRI and Arthrogram. The tests confirmed his suspicions, and at my second (follow-up) appointment after the MRI, he very clearly presented the problem to me as well as potential courses of remedy. He informed me that due to the nature of the injury and the amount of time lapsed since it occurred, there was no reason to attempt further non-surgical treatment. I had already done most of that on my own prior to seeing him, with little to no improvement. Although surgery seem inevitable, he did offer one last non-surgical treatment option, recommending we try that before pulling the trigger on surgery. This consisted of a cortisone (steroid) injection directly into the injured joint. So he administered the shot and we have a follow-up again in a few weeks to determine its affectiveness and discuss surgical options again. I appreciated that Dr. Gordon was not pushing me toward surgery. What he did do was listen to my description of symptoms as wells as the courses of action I'd already tried on my own. Given all of the information (my descriptions, his exam, the MRI, etc), he concluded that the next step was to perform an arthroscopy and determine how to repair the joint. I will attempt to add to this review after the culmination of my treatment. That said, I would happily recommend Dr. Gordon to anyone. My experience thus far reflects his reputation.

Description of Work
I sustained some kind of injury to my hand/wrist back in September. The condition had not improved over the course of several months, despite rest and immobilization of the joint. Having sustained orthopedic injuries in the past, I was fairly certain I'd sustained a ligament injury of some kind. Dr. Gordon came very highly recommended by my work supervisor, and I discovered after some brief research of my own that he is very highly regarded hand surgeon. This fact actually leads to my only complaint...he is highly-sought-after and trying to schedule an appointment is tedious. I think my first appointment was not until at least 4 weeks after I called to schedule it, and unfortunately it was delayed another 10 days or so. I arrived for my appointment and checked-in. The staff was neither unfriendly or extra-friendly. They were just kind of "there". The facility itself appears to be top-notch, typical of a university medical center. I should note that I visited Dr. Gordon at the hand clinic at the University of Colorado Anschutz Medical Campus in Aurora, which is a different address than listed here on Angie's list. I visited with his physicians assistant and another doctor whom I believe was a resident before finally seeing Dr. Gordon. I have seen Dr. Gordon twice, with another follow-up in a few weeks to discuss my surgical options. My second appointment was 2 hours behind schedule. I don't know how or why he was backed-up that far that day, but I would say that isn't typical.

I use them because my insurance covers me there. They were extremely competent. I had a successful surgery there. It was relatively easy to schedule a surgery.

Description of Work
I had been to University Of Colorado Hospital in Denver for an cataract surgery at the eye institute there.

Everybody is very nice there, very patient, and thorough.

Description of Work
I use this hospital for medical care.

He is an orthopedic surgeon.

Description of Work
I see Dr. Dayton at University of Colorado Hospital Anschutz Campus. I had a hip replaced.

The doctor that I went to was in a group called "WISH" which was "Woman's integrated Health Services". I wanted to try something like that. It was a part of the hospital and they had doctors' offices. They were all connected. I had my own physician there. They had four to five women doctors in that group and I went to one of them. My overall experience with them was excellent.

Description of Work
I last went to the University of Colorado Hospital Anschutz Campus in November 2010.

Soon after arriving at a resort 4 hours from Denver (in the middle of nowhere - no cellular service even), my husband began experiencing problems with his leg that had a stent implanted a month prior. When we finally made contact with his doctor, he insisted we go immediately to the University of Colorado in Denver (actually Aurora) ER and gave us the name of a doctor he knew. That doctor and his office arranged for Dr. Ivan Casserly, an interventional cardiologist (a wonderful, caring, extremely competent doctor) to meet us in the ER when we got there. Within 2 hours my husband was in surgery and a catheter was threaded through the extensive thrombus to deliver TPA, a clot-busting drug, for 24 hours. He was taken to the cardiac intensive care unit where I was allowed to stay with him. It was set up with a couch that made into a comfortable bed for a family member to remain at all times with the CICU patient. (This is unheard of in our hometown of San Antonio!). During his stay in the CICU, he received the most competent, caring nursing care imaginable. They were thoughtful about awakening him, reassuring at all times, and even arranged for him to order his own meals (which were automatically checked with the hospital's dieticians and delivered within 45 minutes!) The next day, the thrombus was found to be cleared, and angioplasty was performed at the ends of the stent. He was allowed to fly home the day after that. His medicines were filled at the hospital pharmacy by proactive, caring pharmacists. In my frustrating attempts to get my insurance company to communicate with the hospital to get the information they needed to meet the 48 hr.requirement for an emergency admission precertification, I went downstairs to an office, which was not the office I needed to be in (it was in yet another builiding) but the lady there found someone who was willing to work on my husbands case with the insurance company even though the person who should have been doing that would not be on campus until the next Monday! That's just one of many examples of the "second mile" caring we experienced in that hospital! One other note: The staff was rigorous in using the hand cleanser everytime they entered a patient's room and scanned his arm band everytime they gave medicine, explaining what the medicine was and what it was for. It would not surprise me if there are few instances of hospital-acquired infections and medication mistakes at that hospital if all areas are as good as the CICU!

Innovative Painting is Colorado’s premier painting and staining contractor. Locally-owned and nationally recognized, we have hundreds of residential and commercial customers throughout Colorado and the Denver metro area. We custom design every home or business painting project for our customers and offer reasonable costs and payment options, offering free estimates and no deposit down. Locally Owned and Operated since 1989. No Deposit Ever-Free Color Consulting and Test Paints. Ask about our Discount's. Exterior Interior Decks Fences Cabinets... Drywall and Basic Exterior Carpentry as needed.... Our team of six Manage every project each day to ensure an excellent finished product. Call Today for a Free Estimate and ask about our Discount- 720-328-2572  …

Kind Home Solutions is a locally owned and operated Colorado company that specializes in creating an outstanding client experience for all exterior painting, interior painting, holiday lighting, and roof replacement projects. Home improvement is necessary to keep your home looking beautiful, but the headache associated with home projects doesn’t have to be. If you'd prefer to work with a company that prioritizes you give us a call and see what we're all about!  …

Helix Painting is a team of passionate, caring, service-oriented professionals. Family-owned and operated, we're committed to making your home painting experience easy and low-stress with our unique combination of personalized service, quality work, and an efficient process. We understand the frustration of working with home painting contractors who fail to deliver on promises. Team up with Helix Painting for brilliant results. Visit our website to book your free estimate today!  …

How is University of Colorado Hospital overall rated?

University of Colorado Hospital is currently rated 4.9 overall out of 5.

What days are University of Colorado Hospital open?

University of Colorado Hospital is open:

No, University of Colorado Hospital does not offer eco-friendly accreditations.

What services does University of Colorado Hospital offer?