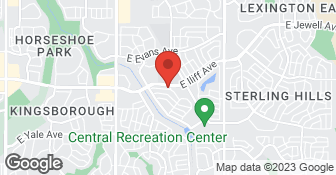 Mile High Van Lines is an interstate, long distance moving company that does not do local moves. We are an owner-operated business who started as a small company in Denver 2008 and grew slowly from doing deliveries for other moving companies into provide all of the service ourselves. With over 10 state of the art moving trucks there is no job we can not handle, but unlike the really big guys, to us you aren't just a number. When you reserve a move with Mile High Van Lines we treat you with the respect, attention and courtesy you deserve. From the moment you express interest in moving with us, we dedicate you your own Moving Consultant that will be with you every step of the moving process. At every point during your move we are just a phone call away. We understand moving is stressful and we make it our mission to alleviate as much of that stress as we can during this transition in your life

My husband, sister, and I relocated from Vancouver, Washington to Casa Grande, Arizona, with our items to be moved to a storage unit in Glendale, Arizona. There were so many mistakes and additional charges that our final cost was twice what the original quote was for. 1. Justin was lacking in knowledge; he told me that they would be sending a 26' truck (two, if necessary and at no additional charge). Instead, they sent a semi-truck. 2. I was told that if the semi-truck would not fit in our storage facility, then we would have to pay additional movers to move our items from the semi to another truck, which would then be taken to our storage unit. It is only by a huge stroke of luck that it fit. 3. I was originally told it would take 3 hours to load everything into the truck and it took over 6 hours. 4. Kevin (the guy calling to verify our inventory list) did not want our updated inventory list. I had told him that my husband had worked up a spreadsheet with a cubic foot estimate and offered to send it to him. He said that you didn't need it; it didn't mean anything. 5. Based on what Kevin told us, we bought money orders in the amount that he gave us. By the time they loaded everything, it was 10 minutes before the bank closed so I could not get any more money to cover our actual cubic footage costs, which were way off. My sister actually had to write a check for an additional $1500 because my checkbook was packed. 6. I was told there would be 3 men to offload our stuff from the semi into the storage unit, but there were only 2, which took longer than we had planned on. 7. Justin had mentioned twice that he was going to talk to his partner to potentially set up our final move (from storage unit to our house) in June so we wouldn't have to pay for the blankets. He did not, so we were charged an additional $400 for blankets. 8. The money orders that I had purchased for the unload were not usable because they were Western Union and he would not accept them. Since it was a Sunday, no banks were open, so I could not get any cash. Luckily for us, we had $4000 in cash, but we still needed the additional $500 for the rest of the cost, plus the blankets. The guys had to sit in our storage unit until we were able to get $400 in ATM cash. We were still short, but were able to use Zelle the next day. I still have not been able to get my money back from the Western Union money orders, so I'm out an additional $3000. 9. We had marked several items that needed to be offloaded from the semi to our personal moving truck so we could transport them to our temporary house in Casa Grande. Unfortunately, they loaded our unmarked, 550 lb gun safe to our truck while we were next door. When we arrived in Casa Grande, we had to find some neighbors that would help us unload it; it took three men, plus my husband and myself. I have no idea how we're going to get that back on a truck in June. 10. I originally told them we would arrive in Phoenix on Saturday evening and wanted our stuff delivered on Sunday. The driver called me Saturday morning wanting to deliver in the afternoon. I told him he were unable to meet him until Sunday. 11. They loaded items that were not marked for Casa Grande, onto our personal moving truck, so now we have to store them here. Overall, this was a complete joke. Unorganized, lacking knowledge, and just plain frustrating. I sent three emails to their customer service department and have never received a response. I would never recommend them to anyone.

Description of Work
Moved from Washington to Arizona

Badly from beginning to end. Though I submitted a list of art and furnishings to Mile High Van Lines, followed by a company rep home visit, and paid for recommended Premium Service, the following happened. It included: Movers late arrival on Bainbridge Island to pack first day, after running late finishing 2nd day having a microphone rammed in my face for a testimonial before any evaluation could be made, hastily signing papers for unexplained and/or incomplete work, finding that all of my moving documents had been accidentally packed in unknown box on van for duration of move, sloppy packing of valuable art resulting in damage, After 1 1/2 weeks of waiting and numerous phone calls we found that things were still in Washington, When van finally arrived Dec 3, late in the day at 6:30 PM., both unloading time and number of movers were underestimated. There were 2 movers (driver who didn't speak English and 1 other mover) who estimated it would take 2 hours but were still unfinished at 3 AM (morning) with apartment on 4th floor), with no offer to come back, leaving this for me and my husband (both 86 yrs. old) to deal with. Because of our age and chaotic unloading, household items (in poorly labeled boxes) had to be unpacked first, leaving art until this past week when space had been cleared for it. There is damage but it could have been much, much worse for both mover and customer. I have photos to submit if necessary. Rather than recommending this mover, I am WARNING both Angies List, BBB, and prospective movers about recommending and working with them Kathryn McHenry, Curator of Wake Forest University Art Collections, retired 539 Power Plant Circle, #422, Winston Salem, NC 27101 Tel. no. 206 999 3612 tanemch@gmail.com

awful. the Packers were good. but the rest was a nightmare. Two days late, came in the evening had to unload a lot of the truck to get at my things, brought in boxes, didn't unpack. and left at 11 p.m. because they said they had to get to Texas.

Description of Work
belongings moved to another state

It went awesome! The men who came out were courteous and professional! They literally rolled out the red carpet for me ( they had red floor protector lol!) Everything went smoothly. They worked methodically and fast. I couldn't finish packing by the time they arrived so we ended up having them pack our kitchen which they made light work of. Highly recommend these guys!

The movers were great - I could not have asked for a better crew. They communicated with me the whole time they were on the road, and I truly appreciated their effort. I highly recommend Mile High!

Easy peezy japanesey, we’ve had problems with movers before, to say this was a relief would be an understatement

Thank you for taking the time to post such an awesome review for us! We appreciate your business! Regards, Mile High Van Lines
1.0

They suck! Doubled the price. Broke items. Damaged furniture - the one BASIC thing that needed to do was pad furniture to prevent scratches and damage and they couldn't even perform that one basic moving service correctly. They gave me other people's belongs even after I said that the item(s) weren't mine. Oh, not to mention, all of the reviews online are fake . How is it for a company that has been in business for 10+ years only have reviews that go back a few months and they are ALL 5 stars??? This company will give you a low ball quote to suck you in to only double the price and break/lose items in transit. They also nickle and dime upon delivery; $75 extra if elevator and $75 per 75 feet if the distance is greater than 50-75 feet from truck to door. Moreover for long-distance moves, they load/unload your belongings at a minimum of 2-3x and who knows how many times once it is on the dock. This is why/how many items get damaged or lost in transit. For this reason alone, you are better off selling, donating, giving away as much as can before your move then buy new when you arrrive at your destination. I wouldn't even trust this company with an in-town. DO NOT HIRE THIS COMPANY.

Description of Work
Move household items from Seattle to Denver

Mile High Van Lines were awesome! Every step of the way they communicated what I could expect. Very professional. I would definitely use them again. Thank you for making my move simple.

I got to tell you I have moved several times but this time it was the most pleasant experience that i ever have. The crew very respectful and professional and courteous from beginning to end I'm very happy with their services

Thank you for taking the time to post such an awesome review for us! We appreciate your business! Regards, Mile High Van Lines

Pryme Local Moving & Storage is a reliable and honest company located in Denver CO. We pride ourselves on top notch customers service and a stress free move for our customers. From a simple delivery or to a full five bedroom home, Pryme will always exceed your expectations. Our trained office staff and professional movers will ensure that our customers receive a 5 star service and always go the extra mile to complete our company motto, "Creating Customers For Life"  …

We offer quality service at an affordable price. Contact us today about an estimate! Military and First Responders discount of 5%.  …

We do not do local moves

Mile High Van Lines Long Distance Only is currently rated 3.2 overall out of 5.

No, Mile High Van Lines Long Distance Only does not offer eco-friendly accreditations.

Are there any services Mile High Van Lines Long Distance Only does not offer?

We do not do local moves