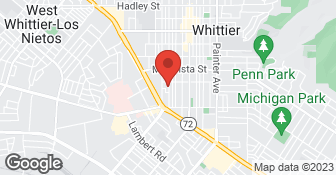 Every customer's individual needs are important to us at CJ's PlumbingNRooter. Our focus of providing quality plumbers and service combined with honesty has made our plumbers the first choice of many residential and commercial clients . You can count on CJ's PlumbingNRooter plumber to take care of your plumbing and drainage needs-day or night with no overtime charge

Jason of CJ's did an excellent job, and answered all of my bothersome questions (which I really appreciated). He recommended an additional repair and I could see that it was clearly necessary. His stucco patch work was excellent. We will definitely rehire.

Wonderful! He worked very hard at it. He tore out the existing old shower, filled out the walls, took out the bathtub and put in a shower kit.

Description of Work
He redid the whole bathroom.

Excellent service! Within 3 hours, affected pipes were replaced and new faucet installed. Having an old house, I was prepared to face a complete re-do of the plumbing but CJ Plumbing was able to provide the repair needed. I will definitely be using them for future plumbing service!

CJ's was able to come out the same day, which was awesome, and showed up just when they said they would. They were helpful, informative and the price was right. Will be using them in the future for sure.

Description of Work
We had a clogged kitchen sink.

Service was prompt, courteous and reliable.

Description of Work
I had a new whole house water filter ration system installed, a Spicket put in for a new sprinkler system and they serviced my tankless water Heater.

Thank you very much, we appreciate all comments.
1.0

Description of Work
We needed a garage laundry sink cleared.

[Member name removed], First I would like to say thank you for your comment we appreciate all comments good or bad it helps us grow as a company. Now I would like to address some of your concerns on how we handled your job. I would like to start by saying we do not up sell clients, we educate them however on the options for a repair. Regarding the pricing if you look at our Angie'[Member Information Removed] list ad online or in the book our $69 special is on there for all Angie'[Member Information Removed] list customers, I am sorry if you assumed you would receive an additional discount . I do believe we tried every option to make you happy including applying the amount paid to future services, but we were unsuccessful in doing so. Based on your comment It sounds like the plumber you had come out after us pretty much told you the same thing we said, you need to replace your pipes. Not sure why or how you let the plumber install your pipes with no slope but any master plumber would have done this correctly. I am confident in time you will find we are the most upfront, trustworthy and professional plumber company on the market, we will use this experience to provide even better service to our customers. Again thank you for you business and your comment.
5.0

They were very good.

Description of Work
It went well.

Very well and very efficient. He gave adivice about my very old toilet, and he will install a new one on his next visit.

I purchased a drain cleaning deal on a Wednesday and by Thursday evening they were on-site to clear my clogged bathtub drain. They were quick and efficient and completely professional. All my calls to them were answered in a timely manner and they were in contact with me at all times regarding their time of arrival. I highly recommend them and would definitely use their services again.

Description of Work
They unclogged my bathtub drain.

Description of Work
The plumber was really nice, he took the time go resolve our clog.

Jason from CJ'S Plumbing answered my call for help and came to my home promptly. We thought it was a simple blockage in the sewer line that could be fixed with the rooter treatment. It was not. The following morning he returned with the camera equipment and found that the line was filled with tree roots and the pipe joints were broken. The had to insert a sleeve and filler to give us a new and workable system. The sewer line extended from the house, under our concrete stairway and down to the street. Luckily, we had the option of fixing it with the sleeve insert and this allowed the repair without having to break up and dig through the concrete. Two workers completed the entire job in one day. They were clean and courteous and professional at all times. Jason told us what the problem way, showed the pictures using the camera inside the pipe, explained the method he planned to use to fix it and we agreed. Our property was left in clean and intact condition. All holes were filled in with dirt and all debris cleaned and disposed of. They even washed off our stair steps and porch and left everything clean and tidy. We are very pleased with the work and we were given a warranty on the work performed. I would use this company again if the need arose.

Description of Work
Diagnosed the problem of sewer blockage. Determined that our clay pipes were all broken at the joints and filled with tree roots. Could not use roto-rooter due to the breaks in pipe. Ultimately inserted 40' of plastic sleeving inside the broken pipes and created a whole new pathway to the sewer. The work was completed in one day, as promised.

Did an excellent, quick job. Very clean and friendly. Such a blessing to have finally found a quality plumber in this area that charges reasonable fees. I will definitely call him in the future!

Thank you for your comments these go along way.
5.0

He arrived when he said he would. Very professional and honest. Cleaned out our drain. All is good!!!

Description of Work
Unblocked drain in bathtub and evaluated other drains in the house clearing one in bathroom sink.

Great service, extremely responsive and honest. Was in and out, and leak repaired with no hassles.

Thank you we really appreciate your feed back with our service. We hope you are now a client for life.
2.0

Description of Work
Jason did not show up on the scheduled day. He did not call me to reschedule or notify me at all. I took a half day at work to handle the plumbing issue and sat at home waiting until I reached out to him. He let me know his mid week project turned into a 3 day project and he was going to call me. He obviously knew the day before he wasn't coming to my house. Once I called him, he did reschedule for the weekend and did the job that I asked for him. Also, I feel as though he raised his price to negate the value of the Angie's List deal. I have had similar jobs done before and was charged much less. He was very polite and did exactly what I wanted. That being said, I would not recommend him.

Did not contact as stated on the website after the purchase of the deal. I contacted them after the date stated and found out that I could not use the deal because it was basically for single family residences not townhomes or condos. I am in a townhouse. I decided to pay the difference and use them anyway since I desperately needed my sink fixed, but to no avail that did not work out. They didn't show on the date that was stated to me and then did not show on a later date that was told to me again.

Description of Work
Nothing,

(Removed member name), Again I apologize for the inconvenience this caused you. I did try to re scheduled but you declined.
5.0

Called early AM. He arrived as expected mid morning. Got clog clear by noon.

Description of Work
On time. As estimated. Clean, friendly. Did a great job.

He was here on time did neat work and all the drains are working well.

Description of Work
Snaked out 3 lines.

[Member Name Removed], Thank you very much we look forward to working with you again.
5.0

They have done two service jobs for me. He was always where he needed to be on time, he has a delightful personality, and he did good work. I wouldn't hesitate to recommend him- he is a really professional and delightful young man. He did everything that he was supposed to do and did it with good humor, and courtesy, and cleaned up. His price was very fair.

Description of Work
I have old lines in an older house and they would get blocked up and so he has to come out and clear them. He also put in a new sink for me at another occasion. It is basic plumbing stuff that he did very well.

Description of Work
Jason is so nice and has come to our house a few times to address routine plumbing issues like installing a new kitchen faucet, unclogging shower drains, etc. I would definitely contact him again.

Koko Drains has been serving the local area with professional drain and sewer cleaning services for more than 10 years and we have built our reputation on services that people can fully trust. With a priority for excellent customer service and satisfaction we are known for our integrity and our quality of work. Drain and sewer cleaning is our specialty. We also provide camera inspections, repairs of drain or sewer pipes as well as toilet and garbage disposal installation and more. Call us for more details or to schedule service today. Going the extra mile means… The rendering of more service, better service than you’re paid to render, doing it all the time, and doing it in a pleasant pleasing attitude. AREAS WE SERVICE: www.KokoDrains.com  …

CJ'S Plumbing N Rooter is currently rated 4.6 overall out of 5.

No, CJ'S Plumbing N Rooter does not offer eco-friendly accreditations.

No, CJ'S Plumbing N Rooter does not offer a senior discount.