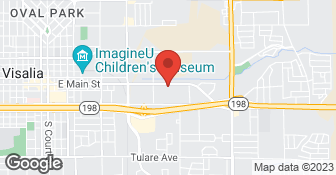 Visalia Plumbing has been serving the greater Visalia area since 1985. If you're searching for a Plumber in Tulare, Porterville, Hanford, Lemoore or one of the nearby communities in Tulare and Kings counties, congratulations as You found us and we can be to your home or business shortly. Clients choose us because we do what we say and say what we do. Our reliable and professional plumbers are here to help you find cost-effective solutions to all your plumbing needs. Let us put our decades of plumbing experience to work for you. If you would like to set up an estimate, please contact us today. Additional DBA - Visalia Plumbing Inc. Contact name - Mike Carpenter. Check out our website for special offers. http://www.visaliaplumbinginc.com/...

Stangby Designs provides a Landscape Design to the homeowner. We give you a clear plan on how to bring your dream yard to life as the homeowner. We provide a 2 dimensional plot plan with details on the project materials, estimate, and then connect you with a contractor who can build your project just how you like.  …

If Drain Guru can't fix or repair your project then we don't charge you! We are also available 24 hours - a - day, 7 days - a - week. Drain Guru is your neighborhood drain cleaning and sewer repair specialist. We use up front pricing and guarantee our services to not only be the best in the industry but also very affordable. Drain Guru is dedicated to providing the highest quality plumbing service for businesses and families across the Central Valley. We at Drain Guru understand that plumbing emergencies can happen at anytime, so we pledge to provide 24 hour service with no overtime charge. "Drain Guru Pro Package" includes mainline cleaning, 1 kitchen drain cleaning, 1 tub or lavatory sink drain cleaning, and camera inspection for $280. Up to 3 total drains cleaned!  …

Dear Angie, your Service called or someone called SEEN Plumbing for me but I wasn’t ready to call anyone & he called me to make an appointment so I did make an appointment with that Company. Yesterday he was supposed to come to my house from 9:00A.M.-11:00A.M. He never called or came, so I called him & he said that he forgot, he was busy doing other work. So I canceled. Thanks 🙏 anyway Angie. God Bless!

Description of Work
Outside plumbing replacement

Dear Angie, your Service called or someone called SEEN Plumbing for me but I wasn’t ready to call anyone & he called me to make an appointment so I did make an appointment with that Company. Yesterday he was supposed to come to my house from 9:00A.M.-11:00A.M. He never called or came, so I called him & he said that he forgot, he was busy doing other work. So I canceled. Thanks 🙏 anyway Angie. God Bless!

Description of Work
Outside plumbing replacement

HORRENDOUS EXPERIENCE! They came out, stated my installed tankless system needing repiping didn’t have a recirculating pump built in & recommended I get one. They quoted $99/hour for labor & parts are separate. Stated there were no options for an external pump (not on market) & wanted me to purchase their system with one built in requiring to uninstall NEW system & install their system (thousands more) & stated it would require 2 men for 8 hours of work & appointment was booked. After researching, there are both universal recirculating pumps for tankless systems & the brand I had made an external pump specifically for the system I bought. When I told them this & that I would only need to have the system already in place properly pipped with external pump installed, they became hateful from that point on & demanded I had a non-working outlet next to system fixed before they would do any work (didn’t have this demand when I booked appointment with their system). I had already fixed the outlet but the lady who answers the phone repeatedly stated no work would be done until outlet fixed, even after I told her I heard her the first 5 times & would ensure it was done, she continued demanding every communication in a hateful tone, multiple times each communication. Was told I would get a new bid with their tankless system removed & labor hours adjusted, it took a week to get it & just 2 days before the appointment. I was shocked to see the bid was still high ($1300) since the system was already installed but only needed repiping & recirculating pump installed. I sent an email, I only requested to know how many hours they expected to need that day, she responded by telling me the appointment was cancelled & I should find another plumber. They cancelled 2 days before because I dare ask how many hours were needed on a $1300 estimate. Not only did they not know of universal recirculating pumps for tankless systems, or lied to sell me their system, but they wanted 11-12 hours of work (estimate not detailed so I estimated $100-200 for some parts) to repipe an already installed system & install a external pump. They are dishonest people & cancel if you inquire about the estimate which I believe was highly bloated. I will never use them again, buyer beware!!!

Good morning Ms. [Member Name Removed], We are very sorry to hear you had a negative experience with our company. We were originally out due to your gas being turned off. At this point, we drove out to Hanford and spent over an hour there getting you turned back on, due to no hot water, which we then recommended you replace your improperly installed unit and have a technician come out and run a proper electrical outlet to service your new unit properly. We did not charge you for our first visit out due to your kindness and appreciation towards us, we were just happy to help. Later, you contacted our office with requests of a estimate for a change out, which we provided three, at your request. You had several questions and we happily answered all of them, which is what we're here for! One issue you had was with the charges of all three estimates, we explained this was our estimate and you were more than justified to call around for other prices. We did insist that an electrician came out prior to us installing your unit, so there were no future issues, as the plug you had would not be efficient. We did mention several times about the electrical plug due to your statement, that you did not think it was needed. I apologize we were unable to take care of your service need and that you felt anything other than the help we tried to offer.
5.0

David did a great job. Some items had been discontinued but he tried hard to get adequate replacements.

Ms. [Member Name Removed] Thank you for taking the time to review your service with Visalia Plumbing. Have a great day!
5.0

It went fine, the work was good, the plumber checked carefully for leaks. He tried to use my old peatrap but it leaked on both ends so that was replaced.

They did a good job and were on time. Expensive, but not out of line.

Prompt service from scheduling appointment to plumber fixing the problem. Very professional. Will definitely use them again and I recommend their service. Very reasonable price.

It was a pleasure servicing your plumbing issue. Thank you for taking the time to write a review.
5.0

We had roots growing through the pipes stopping up our plumbing. It took my warranty co. 3 weeks and 3 different plumbers to conclude they don't handle root issues. This company came out cleared the roots and also repaired the other slow flushing toilet. He was very thorough in his investigation;We will have them back out with a camera to further review the main "root" of the problem. Very thankful for the prompt and professional assistance.

We are happy we could help and appreciate you taking the time to review your experience with Visalia Plumbing.
5.0

Wow just so nice David came out way sooner than we expected called first and was prompt in his estimated time to arrive. Upon arrival quickly did the job until the water flowed freely again. And upon getting the bill was pleasantly surprised that it was as expected. Fully expecting the typical "other fees" or more time than what was really at the home. SO very happy with them highly recommend them and if you are so fortunate to have David expect a nice competent man. Thank you.!! P.S. yesterday had "Router Rooter" and the same job they quoted $535. ouch .....

Description of Work
Kitchen drain stopped up it is quite a long run to the main line.

Thank you for taking the time to write a review. We appreciate your business and it was a pleasure to take care of your plumbing problem. Have a great summer!
5.0

They were great, professional, quick and did the job real quick. I would recommend them to anybody. I have no complaints and the price was great too. They were very informative and pointed out the areas and what had happened. They assured us that if things didn't work out they would come back.

Description of Work
They did plumbing works.

Thank you for your business. We are happy we could help with your plumbing problem.