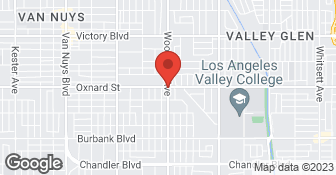 Family owned and operated, Mr. West Repairs is the go-to residential appliance repair company that has earned its success through word-of-mouth growth, by providing consistent quality appliance repair and service. Servicing most of Los Angeles County including Van Nuys, North Hollywood, Silver Lake, Echo Park, East Hollywood, Los Feliz, Highland Park, Pasadena, Alta Dena, Glendale, La Canada and La Crescenta. Mr. West Repairs is the people's choice for all washer, dryer, refrigerator and oven needs. Our technicians have the experience and knowledge to accurately diagnose, and in most cases repair same day , almost any residential appliance found in homes today. If your fridge is making a funny noise, or your oven isn't getting hot, call the professionals at Mr. West Repairs today!...

Very nice, knowledgeable and did a good job!

My refrigerator’s ice maker stopped making ice one day. I tried Mr. West Repairs due to the good reviews online and because I like to support small, local businesses when I can for home services. Michael answered my phone call on my first try. He had an opening the next day. He showed up exactly within the 3 hour window he gave me. He was able to diagnose my ice maker’s problem with 20-30 minutes. It required a new thermostat/motor so he had to order that. He called me one week later once the part arrived. He came back on my first available afternoon and installed the new part in about 30 minutes. It is now about 7 hours later and there are now some ice cubes in the bucket so it appears to be working just fine. I deemed his fee for the job to be very reasonable. I will absolutely use Mr. West Appliance Repairs again for my repair needs and would not hesitate to recommend them to my friends. I think you will be very pleased with their service!

It was great. Mr. West Repairs technician was prompt, let us know issues, got appropriate parts quickly and was very professional. He alerted us to potential problems and told us how to abate them. It was a pleasure doing business with him. We would definitely hire again.

Description of Work
We needed door starter and check of vents, hose repair.

Excellent service. All my questions answered. The service tech(sorry I didn't get his name, he was great!) spent almost 2 hours diagnosing the problem. All is well.

It went very well. The technician was very knowledgeable when answering all my questions. He was able to assess the problem and determine the resolve. He was very courteous and professional. I would utilize this company's service again.

It went GREAT!!! Mr. West called and came on time. He explained what he would be doing and what to expect. Fortunately it was the worst, he cleaned up and put everything back. He went on to explain how to avoid future problems and way to get better efficiency out of both LG washier and dryer. I will be calling them again for all of my appliance needs. Thank you

Mr. West Repairs are upfront and honest about pricing and estimates. They gave me suggestions on troubleshooting my washing machine, which ended up fixing the problem I was having. Highly recommending giving them a call.

Great!!! Mike did a great job and finished quickly.

Thanks for sharing your experience [Member Name Removed].

He was on time, professional, yet friendly, found the problem and advised me.

Hi [Member Name Removed]. Thank you so much. We really appreciate you taking the time to share your experience.

Excellent..He arrived timely…the repair was completed and I am totally satisfied

Hi [Member Name Removed], Thanks for sharing your experience.

On time, courteous, and neat. There was no switch and bait or any extras suggested. The price was what was quoted on the phone. Would, highly recommend this company, KUDOS

Hello [Member Name Removed], Thanks for taking the time to leave a review.

This was my second time having Mr west come out. Fist time my fridge was acting up. This time my dishwasher basically flooded my kitchen. Mike came out the same day and replaced a water valve. Great service !!

Thank you so much for sharing your review! I am glad to hear you were happy with the service you received.

They were great! On time, clean, clear and fair pricing.

Hi [Member Name Removed]. Thanks for taking the time to share your experience.

Mike was the ideal repairman. He called to let me know he was on his way, he was on-time, and professional. One of the burners of my stove top was not firing properly, and discovered heavy corrosion when he cleaned the head to diagnose the problem. Unfortunately it needs to be replaced, and this is where he went above and beyond. Since it's an older model from 2003, parts were not readily available. Mike called multiple suppliers and the manufacturer to search for the part, and although it's no longer produced and unavailable, he circled back to let me know what he learned each of them. Most people would have stopped after calling one supplier. Given this level of accountability and effort, Mr West is now my go-to with my appliance repairs.

Hi [Member Name Removed]. Thank you so much for taking the time to share your experience. We're here and happy to help.

The service was great when Michael came by. The ice machine was broken due to it being an older unit. He diagnosed it in a few minutes. Apparently, something was wrong with the valve, and that caused the fridge to leak. Michael shut off the ice machine, ordered a new part, and within the next few days, he installed the part so I could have ice again for my drinks!

Hi [Member Name Removed]. Thanks for leaving a review. Really appreciate you sharing your experience!!

I had an amazing experience with Michael. He was very professional, friendly, and did the job needed. Price was very reasonable and overall the performance was good, professional, courteous, and got the job done quickly without any issues.

Hi [Member Name Removed]. So Happy to hear from another satisfied customer. Thank you for sharing your 5 star recommendation.

Amazing! He was actually the first person to call back. Not only did he recognize the problem but was able to give me a ballpark estimate over the phone! He arrived on time and was friendly, knowledgeable & Professional! Hiring him again to fix my stove!

Hello [Member Name Removed]. Thank you so much for taking the time to share your experience and your kind words.

Mr. West Repairs sent help to fix my fridge the same day! And was able to find the problem to a leak inside that I could not solve on my own. Technician was very profesional and polite and cleaned up after themselves. Great service thank you guys!!

We're happy to help!! Thank you [Member Name Removed] for sharing your experience.

All went well, done in a timely manner I could tell the work was done very professionally. Thank you Mr.West Repairs.

Hi [Member Name Removed]. Thanks so much for sharing your experience.

We were very happy with the service we received from Mike. He was on time, safe in terms of Covid precautions, and fixed the issue in under 2 hours. He was also very friendly and easy to have in our home.

Hi [Member Name Removed]. We really appreciate you taking the time to share your experience.

My fridges compressor was shot. The service call was amazing. Fast and tidy.

Mike is the best, he returned my call within a few minutes and made time to see me that same day! He came out diagnosed the issue and explained to me what need to be done. He ordered the parts needed, that same day. When the parts came in, he returned and had the problem fixed in under an hour. Mike is very cordial and excellent at his job. I highly recommend him and will definitely use him again.

Hi [Member Name Removed]. Thank you so much for sharing your experience and your kind words.

Best service I can ask for. Very profession and clean.

Hi [Member Name Removed]. Thank you for your 5 star recommendation.

Mr West Repairs was great. I’ve been using them for a little while now, it’s been a quick and simple exchange everytime. This last time our oven was out. The tech had the part he needed with him and was able to do the repair same day. What more can you ask for?

Hello [Member Name Removed]. We appreciate you taking the time to share your 5 star recommendation. Thank you.

Whenever I needed appliance repair, I never knew who to call! I will not have that problem anymore, Mr. West Repairs will be my go to for my appliance services and repairs. They repaired my dishwasher, and replaced a filter on my refrigerator. The representative was punctual, professional, yet very personable, honest and informative. The cost was reasonable and fair. I would highly recommend Mr. West Repairs.

Hi [Member Name Removed]. Thank you so much for taking the time to share your experience and 5 star recommendation.

Founded January 2017. Please call our office today and get your schedule for your appliance repair. +1 818-818-8204 With Angi Since August 2022. AML Appliance Service is a company founded by experienced appliance repair technician.Our technicians certified from DCA and ETA 608 Type l, with over six years experience as an appliance repair technician .Our service center is providing professional customer assistance. Our well trained and knowledgeable technicians stay updated on new appliance and manufacturer developments. We have been working in the LA County area with appliance brands like : Electrolux, Frigidaire, Whirlpool, KitchenAid, Maytag, Jenn-Air, Samsung, Viking, SubZero, General Electric, Fisher Paykel and LG. In addition to quality repair services, AML SERVICE is glad to help you with maintenance and repair of all category appliances .AML Service has the best prices and always backs up our job with warranted parts. Along with our emergency response, most service calls can be scheduled within 4-12 hours. We generally provide a two hour window for your appointment whether it's in the Am or Pm. We do not repair commercial appliances. The Customer's satisfaction is our priority.  …

We make your convenience our main goal as we ensure that your appliances are performing at their best. Trinity Appliance Services is oriented on your complete satisfaction with the final result of our work. We only use Original Parts with our Repairs. We are here to help you! We are an essential business which is on duty 24/7 365 days a year. We wear face masks, gloves and special uniform during Pandemic Covid-19 for your safety.  …

We Provide Service And Repair of any kind Dehumidifiers, HVAC/AC systems And Commercial appliances. Please reach out to us directly at 818-433-7797.  …

Insured
All statements concerning insurance, licenses, and bonds are informational only, and are self-reported. Since insurance, licenses and bonds can expire and can be cancelled, homeowners should always check such information for themselves.To find more licensing information for your state, visit our Find Licensing Requirements page.
General Information
Free Estimates
No
Eco-Friendly Accreditations
No
Payment Options
Visa, MasterCard, American Express, Discover, Check
Senior Discount
$15.00
Warranties
Yes

Mr. West Repairs is currently rated 5 overall out of 5.

No, Mr. West Repairs does not offer free project estimates.

No, Mr. West Repairs does not offer eco-friendly accreditations.

No, Mr. West Repairs does not offer a senior discount.

Are there any services Mr. West Repairs does not offer?