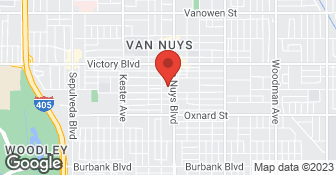 They got back to me promptly, gave me multiple options, then completed the work on time and at the agreed upon price. They communicated with me at every step of the way. Extremely professional.

Description of Work
Auto air conditioning was not working. They put in Freon and did a full A/C maintenance service.

They greeted us warmly, took care of everything for the cars in a timely manner, kept us informed the whole time what was happening, electronically sent us all the records, honored our Angie's List coupon without us purchasing anything in advance, and even gave our baby gifts! It was a lovely, unexpected experience.

Description of Work
This delightful family-owned business made getting an oil change fun.

Great service throughout they replaced the starter to my car at a fairly reasonable price. Had no problems with them and they got the job done as I haven't had any problems with my car since. Thanks

Description of Work
Replaced the starter to my car

Hi [Member Name Removed] Thank you for your kind review on AngiesList Jack
3.0

I had been pleased with their work on my 1st visit and repair, and gave them a very good review, but now I have a different opinion. They replaced a broken windshield. The first day I drove it in the pouring rain, my windshield wiper fell off and then I discovered the window was not sealed in one corner. I took my car back and they fixed it right away. One time as I was leaving Auto Aid my left hand turn signal was not working so I had to turn around to go right back. They did something to fix it, but didn't tell me there was a problem. I thought something had just gotten disconnected when they were working on my car, but soon after my blinker went out. I always ask them to check the car over for problems. After all the work was completed my car's steering was still making a humming noise, I took it back. They told me it was the power steering pump they had replaced. This happened twice and to their credit they replaced it on guarantee. After replacing the pump the second time and still having the noise, I asked if it wouldn't help to re-bleed the system for air and was told yes, but it was suggested to me, to try a special fluid to flush the system instead, at my cost of $79.97, I was told it might or might not help. it did not help. The last time they changed the pump they used a different company, but my car did not receive a re-bleed. It is better but still makes a noise. The day I picked it up I could still hear the noise, but I was told it was gone. My idle was running high and I had to take it back again. I guess they just do not here these things when test driving. They had my car a long time to repair it, they always keep it a long time. My car is old, but only has 93,000 miles on it, so I understand it does take a little longer to get parts, but not that long, but I didn't want to rush them. I feel if it was a newer car they would get the work done faster. I do appreciate the ride and pickup they offer. After having over $4,500.00 work done on my car since 12/2014 at Auto Aid, one would expect it to run better. The car vibrates when warming up and the idle is still not right. They are very nice but I would prefer the work get's done correctly the 1st time. I have had to take it back so many times. I would only go there now because of the guarantee

They are nice, honest, and clean. You could probably save a little money going elsewhere, but I love their professionalism and great work. Plus, their fast wifi and clean restroom/waiting area really add great value to their business. These guys are my go-to.

Description of Work
I love this place.

These guys are great I've referred both friends and family to them and have heard nothing but great things. They are honest and affordable, they offer a AAA discount and are always mailing coupons for birthdays or just because :) They definitely know how to treat their customers and are always very helpful

I went there for my car's headlight because I saw many good reviews about them and I felt they are nice and good.They checked my car and show me the price that was little expensive. After I paid the price I felt that was not right price, but they asked me to visit and took time to explain why that was expensive and I appreciate it.

My dear friends at Auto Aid, as always you did a Great job on my car. I wish more people knew how good you are...

My dear friends at Auto Aid, as always you did a Great job on my car. I wish more people knew how good you are.

The independent automotive shop was established in 2001 by Carlos and Guille Menjivar and won the Super Service Award in 2013. Our company, Omega Automotive (formerly Omega Transmission), is in Northridge, CA. We offer honest and transparent car repair services to residents and businesses in the greater Los Angeles County area, blocks away from California State University at Northridge (CSUN), the Northridge Fashion Center, and just minutes from the 101, 118 and 405 Freeways. The Omega automotive family expanded in 2010 to include Northridge Body Shop, an auto body repair and collision facility. This affords Omega the opportunity to provide complete mechanical and body shop services for all passenger vehicles including cars, small trucks and vans with the capacity for up to 15 passengers. Today, the Omega family consists of seven employees including Carlos and Guille, two service writers and three technicians. The bi-lingual staff provides customers with personalized and friendly service. Most services can be done the same day and repairs are backed with a 24 month or 24,000-mile warranty. The Menjivars are ardent supporters of community events. Carlos donates his time to the American Youth Soccer Organization (AYSO) and the Greater Van Nuys Rotary. Both are active in their church. Carlos is also a member of the North Valley Regional Chamber of Commerce, Valley Business Professionals and Inside Track, while Guille is affiliated with the Woodland Hills Chamber Women’s Circle and the Women’s Professional Forum. Call Omega Automotive Repair today and discover a different kind of car repair facility, one where you get treated like family. *You can also make appointments online, through our website.  …

All work LIFETIME GUARANTEED. We work with all insurance companies to represent you. We make sure you get quality repairs and you are informed when insurance companies are trying to put inferior parts on your car. We can also test the metal to be sure the parts are factory strength.  …

Steel Impression, proudly servicing Sylmar and the surrounding areas. With over 8 years experience, we are experts in our field. No project is too big or too small for us to handle. Customer satisfaction is always guaranteed. Give us a call, we can not wait to work with you!  …

How is AutoAid & Rescue overall rated?

AutoAid & Rescue is currently rated 4.9 overall out of 5.

What days are AutoAid & Rescue open?

Are warranties offered by AutoAid & Rescue?

What services does AutoAid & Rescue offer?

Are there any services AutoAid & Rescue does not offer?