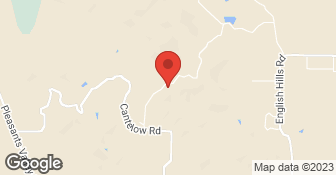 Took him about 1 1/2 hours to 2 simple easy job. Wanted to fix the sprinkler valves for 400. got it by fixed by a person not from Angie's list.

Description of Work
Leak in the front yard brought in a leak detector pinpointed the leak. Found cracked l shaped bender. Went to the store to pick the pats he needed. Dug up about 1 1/2 ft fixed the break replaced the soil and grass.

Emergency situation, Steve was there within half an hour. Very good service!

Emergency situation, Steve was there within half an hour. Very good service!

Steve showed up right when promised and was very polite and got right to work. The job was completed satisfactory.

Our family called this company to help with this problem- when the toilet was flushed water came out of the shower drain. The repairman had some difficulty with his equipment but at the end of the repair said in front of 2 family members and quot; this should last for six months, if you have any problems give me a calland quot;. We were asked if we would fill in a review for Angies list and were given a form - we did stating' good things' based on the experience that day.The repairman took the form with him. About a week ago we had the same problem so we called the repairman as he suggested we do. He said he was having problems with his machine but would have someone else call. Another plumber called us and said and quot;you know we have to charge again?and quot; and quot; Why?- we were told to call if there was a problem and that it should last 6 monthsand quot; He told us to speak with the office because the warranty did not cover this.We called the office and told them re original conversation, they said repairman denies this!.We were then told the warranty doesn't cover 'toilet,drain or sewer stoppages' and it specifically says this on the invoice. Standard warranty:90 day labor, 1 year parts. No guarantee on toilet,drain or sewer stoppages. WHAT! so what does this plumber guarantee. There were no parts-so how about the labor? Nope not covered. SO basically they cover NOTHING!. No offer to work with us on this and the office staff hung up on us (admittedly we were at the point of being angry but who wouldn't be when we had been called liars and with no thought to work with us or any regard to the work not fixing the problem) DO NOT WORK WITH THIS COMPANY.

When our man (Steve) arrived and found out there was no cleanout for the main sewer, he told the family, a son and daughter, of the deceaded father. that they need to put in a cleanout to properly clean the sewer. They declined and told him that they are selling the house, their father just past away and they did not want to spend the money. Steve pulled the toilet as the only way to get into the main line. Steve did not have any problems with our equipment on the job. The sewer was runnig free and clear, when he left the job. The home owners need to have a proper cleanout installed, to properly clean the sewer and have a camera ran down the line, to see what and where, the problems in their sewer.
5.0

They were extremely helpful, the experience went pretty smooth. I will definitely use them in the future if a problem arises.

Description of Work
One of my toilet was clogged by the curiosity of my toddler so we had it out of service for sometimes; then, I did my search through Angie's in order to find a bonded and licensed plumber with a affordable price and I found Aaron. The lady who received the call was very professional and even helped us by providing us with a coupon. The plumber showed up few hours after the call; and , did his job in a bit of a time!! I will definitely use this company if a problem rise up in the future.

The faucet in our second bathroom only sent out hot water. After calling another plumber, also recommended on Angies List, who stated he didn't feel like driving to Winters, I called Aaron Plumbing. The technician was at our door within 15 minutes, turned on the faucet and identified the problem immediately. He stated if the part was available he would no later than the next day to repair. Much to our pleasure, he returned in about an hour with the part and had it installed within 15 minutes. The technician was polite and knowledgable. I would recommend this company to my friends.

Description of Work
Shower faucet in main bathroom only sent out hot water. The plumbing technician was able to immediately determine the problem and within an hour has purchased the replacement part and installed.

Super Service Award Winner 9 years in a row! We are a small family owned and operated electrical company. We have between 2-4 employees depending on need. We are licensed and bonded as required by the State of California. We do charge trip charges for anything 30 miles or more outside of Elk Grove. We are committed to making sure everything is to your satisfaction. We do not use subcontractors and do all of the work ourselves. If work is required outside of our scope of work we have numerous peers we are more than happy to refer to you. Please check out our website for additional savings and more information about or company at www.charlesyoungelectric.com  …

I am a handyman with 10 years experience who does things to the highest quality possible. I pay close attention to detail and make sure every customer is left beyond satisfied. I have done a wide variety of handyman projects and can tackle things big and small, if you are interested in my services please contact me and we can discuss you're project!  …

How is Aaron Plumbing overall rated?

Aaron Plumbing is currently rated 4.6 overall out of 5.

No, Aaron Plumbing does not offer a senior discount.

Are warranties offered by Aaron Plumbing?

What services does Aaron Plumbing offer?