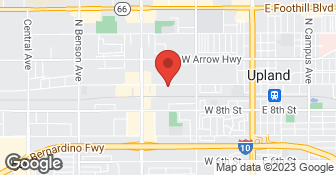 Foothill Foreign is a family owned and operated buisness in Upland since 1983.Servicing and repair Honda, Acura and Toyota vehicles exclusivly.The foundation of our buisness is built on integrity and honesty. We give our customers personalized service and quality workmanship we offer a 24 month 24,000 mile warrantee on all repairs. AAA approved - ASE certified - BBB - ASC -...

I have been using them for three years now. They are trustworthy and honest. They are competent and knowledgeable. They are very friendly and give good suggestions. They have a very, very small waiting area and it is like they only have three chairs.

Description of Work
I use Foothill Foreign Automotive.

I took my Acura in because the "Check Engine Light" came on. They gave me a labor price of $95.00 to diagnose the problem. I left the car and, about an hour later, received a call back. I was told that I can pick up my car at NO COST!! They explained that the car was hooked to the computer but there was to trouble code indicated. They even put the car on lift and could not find anything wrong so, they reset the warning light. How rare for an automotive repair business to wave the labor fee. I know that the auto dealer would never do that. This company is very honest and would use again.

The owners are very honest and can totally be trusted. I'm use to getting phone calls from where I leave my car for repairs and getting high dollar estimates of needed work. That doesn't happen here (at least not very often). We are so thankful for a mechanic we can trust.

Description of Work
Fixed a loud rattling noise coming from under the back seat of our Toyota Camry and an oil change.

Easy to make appointment. Did the work while I waited. Updated me with information regarding upcoming issues to address. Foothill Foreign has been servicing my vehicles for 30 years -- always excellent work, highly professional. I still drive 45 minutes to bring my cars to them. That's how much trust I have.

Description of Work
Major service for my CR-V

Besides being competent, Cynthia and all are also so very nice—and will see you through until you are satisfied. After the initial transmission replacement, the main seal between the transmission and the engine began leaking oil. They CHEERFULLY removed the entire transmission and fixed the leak at no extra cost to me. I'm not sure if I have ever experienced that kind of service.

I love my mechanic. They are always very accommodating and very fair.

Description of Work
I take my car to Foothill Foreign Automotive for auto services.

They always get us in real quickly when we call for an appointment. They are very honest. They never try to make improvements or adjustments that you don't need. Basically they are just very honest people.

The place was privately owned. We never had any problem with them. We would recommend them to anybody anytime and in fact we have done on several occasions. They were Honda and Acura specialist and the owner's name was Dennis. The mechanics were good there. There was one mechanic generally, who had been working on our cars. It was just a family business and very professionally run. They did what they told they were going to do. We don't use the dealer, except when we wanted to buy a car. No matter what our complaint was, dealers were just there to sell things. We found them on a referral, from my wife's friend. They turned out to be everything we hope they would be. We never have taken our car anywhere else. If they can't do something they would tell us, for example tires. Several years ago, the catalytic converter on one of our car was giving a problem and we shopped around on the telephone, calling various dealers. We then ended up calling America Honda, to find out if there was recall on it. Nobody knew anything and estimate was going to above $500 to repair or replace. They told us, they want to make two phone calls. By the end of the day, they called and told me to take my car to another provider, as that particular part on my car was a recall item. The work was done at absolutely no cost. None of them would have had happen without their intervention. We have found them out to be fair in every term.

Description of Work
Foothill Foreign Automotive did standard service on our 09 CRV which includes complete brake job to engine seals. We have been going to them for 20-21 years. My recent visit was 4-6 weeks ago.

Insured
All statements concerning insurance, licenses, and bonds are informational only, and are self-reported. Since insurance, licenses and bonds can expire and can be cancelled, homeowners should always check such information for themselves.To find more licensing information for your state, visit our Find Licensing Requirements page.
General Information
Free Estimates
Ask for Details
Eco-Friendly Accreditations
No
Payment Options
Check, Visa, MasterCard, American Express, Discover, PayPal
Senior Discount
No
Warranties
Yes

FOOTHILL FOREIGN AUTOMOTIVE is currently rated 4.9 overall out of 5.

No, FOOTHILL FOREIGN AUTOMOTIVE does not offer eco-friendly accreditations.

No, FOOTHILL FOREIGN AUTOMOTIVE does not offer a senior discount.