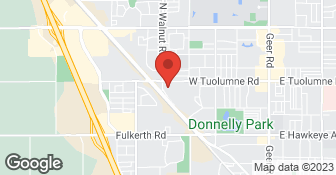 We take our responsibility very seriously when you place your trust in us and have since 1911. We pledge to always tell you up front what your cost will be to complete your job correctly. We make it a point to go over any details or limitations of the proposed system that will affect your enjoyment of the end result. You are told exactly what to expect up front. 100 years 100% customer satisfaction guaranteed

That was really good. They didn’t get the bid. They have done a lot of work for me and they’re great. The price is reasonable.

Description of Work
They evaluated our air conditioning.

They are usually very prompt and can work you in if you have a major problem in a day or two. They worked with me to replace my mom's ac on a couple of the cooler days.

Description of Work
They put an ac unit in my mom's house and my own. They've done just about everything for me.

The house that we moved in hadn't been lived in for several years so there were a few problems but they were always there on time. The price must have been reasonable because I kept calling back. I use them all the time.

Description of Work
There were some stuffed out drains that we had to get fixed.

They were recommended by a friend of ours.

Description of Work
We had a stuffed up pipe which they worked on.

Description of Work
Service call on December 7th. Diagnosed the problem to be the Ignition control, I believe that is what it was called. Ordered same and replace in about two weeks.

great he was prompt and got done quickly

Description of Work
Thorsen's replaced my water heater with a new one. The service man was prompt, knowledgeable and efficient. I will definitely use Thorsen's again for plumbing. | |

They were prompt, they were on time and they were quick. They did exactly what they said they would do and everything was fine. I didn’t shop around for prices.

Description of Work
For plumbing, I use Thorsen’s Plumbing. They replaced a toilet.

When they first came out, I told them that I had my unit completely taken out and I needed my compressor to be re-installed and I needed it all checked to make sure it worked good. The guy did come out and toward the end, they realized it needed an inline dryer which it didn't have. I appreciated that but they forgot to put the condensation tube on. When I did call them back about three weeks later, they immediately came out and fixed the problem and there was no extra charge at all. They were really very good.

Installed new heat pump. They were very professional and quick.They used the old sump pump and it had to be replaced latter on.

We had no other estimates to compare their pricing to, so we marked a N/A for Pricing. Because of their reputation, we did not look to get other estimates. They were on time,professional...they took their shoes off when coming into the home :-) They were efficient and when they left, the area was spotless. They were there when they said they would be there. They service men were knowledgeable and courteous. They gave us a couple suggestions that really helped us make a decision. We went from an electric unit to a gas unit, and they were right.. we saved money with our TID bill. All in all, we were very happy with their service and would certainly use them again!

Description of Work
New air conditioning unit. They removed the old unit and installed a new one.

Thank you for your feedback and positive review. It was a pleasure working for you and we look forward to serving you in the future. Sincerely, Craig Pitau Owner
5.0

All work was done without any problems.

Thank you for allowing Thorsen's Plumbing, Heat and Air to work for you in the replacement of your water heater. We truly appreciate your business and we look forward to serving you in the future. Sincerely, Craig Pitau Owner / CEO Thorsen's Incorporated Contractor License #688058
1.0

iT appears that I endured 3 Years of fraud, incompetence, lies. Then Thorsens endangered my health wth emissions entering my home due to their negligence: had bronchitis caused by emissions, physically Ruined my ceilings and vents with blackened emissions, failure to close air purifier door properly ruined my air purifier expensive filter with burnt insulation (took photos, put it in garage for Thorsens to view, then finally through it out when reallized they were completely non respsonsive & I too injured to get attorney & go to court , hurt my back/leg in cleaning up from extensive sooty emissions on comforters, drapes, carpet, etc. DO ALWAYS CHECK CONTRACTORS LICENSE BOARD FOR CURRENT LICENSE. WATCH CLOSELY to see if EACH TASK IS DONE. (i did watch sometimes. It certainly appeared that "tech" was not cleaning the fliter, as I had seen him do previously. . Do NOT GIVE Business the BENEFIT OF DOUBT if they give run around. . Because it only got worse lalter. (first it was extra billing, false advertising) "Tech" may not be competent or licensed, as apparently the one who Thorsens repeatedly sent to my house was not. Apparently Heat /AC Preventative Maintenance does or does not require a license? or does it? (If each encounter was less than $500?) thus a loophole in the law. At each encounter they /others could ruin our system/house even if project was under $500 or whatever the law states. But PREVENTIVE MAINTENANCE CERTAINLY IMPLIES PREVENTING PROBLEMS, NOT CAUSING PROBLEMS. A 60 to 70 year old women cannot climb into attic to clean an air purifier, that's why I had an alllegged "pro" in Heat/AC do the job of cleaning/preventive mantanance. WATCH OUT FOR: when a Heat/AC company such as Thorsens advertises one price then bills another. They claimed that "charges began when tech left his last call. That is absurd. Even though I reported it to. Supervisors and Service Manager, no response any time. So there were multiple unethical or illegal acts. False Advertising, Failure to provide Contracted Service, etc. The fact that Thorsens did so much that was unethical, incompetent, and dangerous to my health, ruined my property, demonstrated probablle illegal practice. Makes me frightened of them & the City which is supposed to Watch over, and check business licenses. . Despite Thorsens saying they've been in business for so many years, I really question whose Contractors License they claim to be using. It appeared to me that some of them were not licensed, or competent to obtain a license.

Description of Work
APPARENT FRAUD, MISREPRESENTATION: FAILED TO DO PREVENTIVE MAINTENANCE PER CONTRACT. Had NO CONTRACTORS LICENSE AT DATES OF SERVICES, ELDER FINANCIAL ABUSE, DID NOT DO PREVENTIVE MAINTENANCE. REPEATEDLY FAILED TO RESPOND TO TELEPHONE CALLS & FAX REPORTS OF HAZARDOUS, UNHEALTHY PROBLEM THEY CREATED. Became itl and injured. And had to pay others to do work to correct broken duck after initial problelm.. How That happened is a mystery. But I have the timeline of who had been in attic. I had been 3 YEAR regular client for Preventive Maintenance for Heat/AC. Sooty emissions were DISPERSED THROUGHOUT THE HOUSE. through the ducts because they DID NOT DO PROPER MAINTENANCE. I noticed odor while "tech" was still in the house. Noted to him. He DISMISSED it. My Heat/AC System is on roof, and Air Purifier was in attic. "Tech" had Failed to close air purify system door, so attic insulation got into all the AIR ducts. RUINED the AIR PURIFIER. ENTIRE FILTER WAS BURNED. BLACKEND AREA on CEILING NEAR the bedroom duct. Indoor filter which had been replaced 5 weeks prior was totally covered with caramel colored "stuff" that I knew should not be there. Too much and wrong color. I am /was diligent about changing filter,, so knew what it should look like. Emissions into house for weeks. WAS FORCED TO TURN OFF HEAT DESPITE EXTREME COLD. IT WAS JANUARY WITH TEMPS 32 DEGREES OUTSIDE, and 49 to 52 degrees indoors. They only came out FEB 2. Then SERVICE MANAGER and Foreman gave me run around despite evidence I had. ( I had taken the burnt filter out of air purifier, took photos & videos of attic filter and hall indoor filter. Their whole act from start to finisih ...including cover-up demonstrated not only incompetence but illegal activity. They changed /got a new license a few months later. ADVICE: ALWAYS Check Contractors License Board for CURRENT LICENSE, even for "KNOWN Heat/AC businesses. 2. Do NOT allow even one run around. (previous dispute re: double billing.Am frightened of them, that business. They acted repeatedly with such impunity. City was no help. Nor police.

As the owner and CEO of Thorsen’s Incorporated, I would like to express how sorry I am that we did not meet your expectations. As a trusted and beloved company that has served Turlock, Modesto and the greater Central Valley for 102 years, customer satisfaction is of the utmost importance to us. Both my entire staff and I were of the understanding that this entire matter had been mutually satisfactorily resolved in 2007. It is especially saddening to me and our organization that six years after the conclusion of our business transaction, you have indicated that you are experiencing anxiety, frustration and inconvenience. It was my hope that my recent phone call to you would result in an amicable resolution for you. However the rejection of my recommendations and offers coupled with Thorsen’s resolution of your technical issue six years ago, has assured me that I have exhausted every possible remedy. We want to thank you for your past patronage and we wish you the best. Sincerely, Craig Pitau Owner / CEO Thorsen's Incorporated Contractor License #688058
5.0

I give the product and the people that installed the unit both 5 stars. They work very hard and do not leave until the job is done right. Last time they came out, it was in the middle of the summer and was very hot. They did not complain and sometimes were here until 7:00 PM just to make sure the job was completed.

Description of Work
They came out in the middle of the summer to fix our A/C.

THORSEN'S PLUMBING AND AIR WERE VERY FAST TO RETURN OUR CALLS. THEY WERE ABLE TO SET UP AN APPOINTMENT FAIRLY QUICKLY. THE STAFF WAS VERY PROFESSIONAL AND PUNCTUAL. THEY DID ALL THE CLEANING OF THE SYSTEMS AND CHECKED THE HEATER VENTS TO BE SURE NONE WERE BLOCKED. VERY HELPFUL

Description of Work
THORSEN'S PLUMBING AND AIR CAME OUT TO SERVICE THE HEATER AND AIR CONDITIONER BEFORE THE START OF WINTER.

Description of Work
WORKED ON MY PLUMBING AT HOME.

Outdoor Tidy Up Team (O.T.T.) is committed to providing excellent customer service. We provide concrete cleaning services, window cleaning services, and gutter/solar panel cleaning services. We also accept special requests which are accepted on a case by case basis. O.T.T. does everything but landscaping. Please fill out a quote request if you are ready and we will be happy to get you on the schedule today!  …

We believe that your home or business should be a beacon in the community. We have 5+ years of experience and insured. So, we strive to make your pressure washing experience exceptional. We believe in putting the happiness of our customers first with every job and dedicate ourselves to make them happy. Our services consist of pressure wash and soft your residence, commercial, and fleet properties. This includes roofs, concrete, sidings, stucco, windows, solar panels, semi-truck trailers, and more. We are an eco-friendly company and use the most state-of-the-art equipment. For our solar panels, windows, and fleet we use deionized water to prevent hard water build up. We offer free consultations and we're here to answer and questions.  …

No, Thorsen's Plumbing Heat & Air Inc does not offer a senior discount.