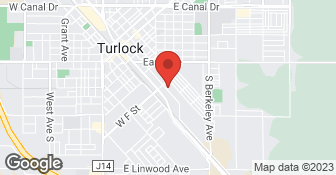 Every member of the Robic team was polite and professional. They did our downstairs system in 2012 and upstairs in 2013. They let us spread payments over 60 days. They took care of all permits and did excellent work. They vacuumed after they were done and never used foul language. Since I don't know anything about such work, I asked the county inspector when he came and he said, "I never see problems with these guys." While I don't expect any problems in the next 15 years, I will call Robic back if I do. They earned my trust.

Description of Work
Install HVAC systems in our home.

Robic Refrigeration Inc. was really nice, he didn't rush. I had some issues with the dishwasher and I used to work on equipment. He just sat there and he would slowly work on it. You could tell he had been in business for a while and knew what he was doing because he would get the prices and he would do all this stuff. He came out and looked, saw what was going on, looked at all the pieces of the appliances and he said he would go back and research the parts. The next day he called and asked if we wanted to go with it and he ordered it. It wasn't something where he rushed out to do all this stuff. He just did it in a nice way and when he worked on it he was slow and methodical which I really appreciated. He explained everything as he was going along, he explained what a pile of junk appliances are in general. He was a very quiet guy. We'd use him again.

Description of Work
Robic Refrigeration Inc came out and did work on our appliances, he worked on the dishwasher and the washer and dryer.

Description of Work
Robic Refrigeration Inc. We got a two year service contract from them.

They seemed very honest and decent. They took care of the problems. They were knowledgeable. They were available right away. They were professional. The price was very reasonable.

Description of Work
They worked on my washing machine and refrigerator for me.

We are a Heating & A/C contractor that specializes in residential service repairs, maintenance, and new installations. We also do light commercial service, maintenance. and installation. We have 25 employees. We are also a service provider for The Home Depot and can offer financing through them. G.E. or Hero.  …

Serving the Central Valley since 2007. We are a diversified building products company for both new construction and retrofit projects. We offer sales and installation of windows, insulation, fireplaces, solar and roofing. We also offer 0 down financing on our installed energy efficient products to help reduce your energy bills and to make your home more comfortable. Our experienced sales staff can help you find the best plan to suit your needs. We provide professional, curtious and timely service. Call today for information and free estimates.  …

Along with solar, heating and air conditioning installation, we also supply our customers with services like air conditioner and furnace maintenance/repairs. Honey’s is also a proud Dave Lennox Premier Dealer and offer a wide range of equipment that backs our commitment to excellence and our environmental responsibility . Our business is a reflection of the people we serve. We set out to do things differently. We looked outside our industry for inspiration, to companies that offer not only exceptional customer service, but an excellent overall consumer experience. We found that building our business around the needs of our customers is the best way to be successful. That is why we have adopted and embrace the "No Stinger" promise. The "No Stinger" Promise is more than a guarantee, it is a promise from our family to yours to take care of your home and family as if they were our own.  …

Robic Refrigeration Inc is currently rated 4.8 overall out of 5.

No, Robic Refrigeration Inc does not offer free project estimates.

No, Robic Refrigeration Inc does not offer eco-friendly accreditations.

No, Robic Refrigeration Inc does not offer a senior discount.

No, Robic Refrigeration Inc does not offer warranties.