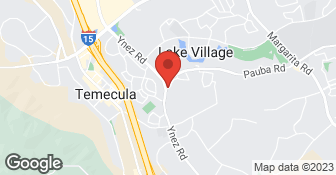 All forms of concrete and block construction. Also, all General Contracting services and hands on remodels, landscape, and commercial construction....

The contractor, Bob Lynn arrived on time with one helper. There were numerous expansion joints that contained rotted wood which was removed. These joints were then filled in. The joints were treated with a material which allows movement of the concrete under the tile without causing the tile to crack. This material is equivalent to a slip sheet. The area was reviewed for low spots and with the help of an 8 foot long level, the low spots were filled in. Where the new tile meets with existing surfaces, material was removed to insure that the new tile was level with the existing surfaces. The existing concrete surfaces had many curves. There were hardly any straight sections so the tile had to be cut to match the concave and convex lines. In addition the pattern in the tile had to be maintained which added to the amount of tile fitting involved. After the grout was allowed to dry, the entire surface was washed down with a vinegar mix which cleaned off any residue leaving a clean surface. The quality of the work is excellent. The job took about 5 days to complete. The contractor's price of $2100 for labor only was very fair. Prior to starting the job I met with the contractor at the local big box store and purchased the necessary materials. Surplus tile was returned to the big box store for a complete refund. I have a couple of pictures I would like to add to this review but not sure how to do it.

Description of Work
Approximately 600 sq.ft of tile was laid over existing walkways and patio.

. Really great all the way.

Description of Work
poured a extention on my patio,large slab . Did exactly what he said and I love it, looks great. Everthing was A+ , everystep of the way, very nice both boss and worker.

The contractor arrived on time and spent the first day removing the existing concrete. Removing the tree roots was difficult due to their size. The contractor had hoped to complete the job in one day but because of the difficulty removing the roots the job was extended into the next day. The quality of the new section is excellent. Despite the extra time required to remove the roots, the contractor stuck to his original price. All debris was removed and the area left clean. The cost was quite reasonable and well below other estimates. All in all a very professional job.

Description of Work
Tree roots had caused cracking of a section of my concrete patio. The contractor removed the cracked section and all the problem tree roots, and replaced it with new cncrete.

With long-time ties to the community, Vision Outdoor Living is committed to being here before, during and after you purchase a new product or service from us. As licensed, bonded, and insured contractors, you can rest easy when having us do work for you! We guarantee your satisfaction!  …

We have the experience and dedication to get the job done right! Specializing in tree and landscaping services; We guarantee your satisfaction, and we won't leave until the job is done right. We pride ourselves on the quality work we provide, while delivering great customer service! Call or click for your FREE estimate today!  …

We offer only the best in quality workmanship and professional courtesy. We specialize in all phases of commercial and residential landscaping. We are committed quality work and outstanding results & are strongly involved in local community activities. We look forward to working with you!  …

Bonded
Insured
All statements concerning insurance, licenses, and bonds are informational only, and are self-reported. Since insurance, licenses and bonds can expire and can be cancelled, homeowners should always check such information for themselves.To find more licensing information for your state, visit our Find Licensing Requirements page.
General Information
Free Estimates
No
Eco-Friendly Accreditations
No
Payment Options
Check
Senior Discount
No
Emergency Service
Yes
Warranties
Ask for details

How is B L J Construction overall rated?

B L J Construction is currently rated 5 overall out of 5.

What days are B L J Construction open?

B L J Construction is open:

What payment options does B L J Construction provide

No, B L J Construction does not offer free project estimates.

No, B L J Construction does not offer eco-friendly accreditations.

Does B L J Construction offer a senior discount?

No, B L J Construction does not offer a senior discount.

Are warranties offered by B L J Construction?

No, B L J Construction does not offer warranties.

What services does B L J Construction offer?