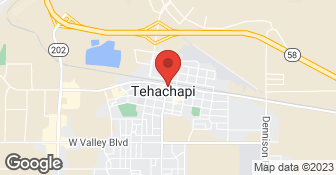 Oscar had done work for us in the past and it was fine. This time he was to do a lot more work and I was given one quote, but not given to me in writing. I had changed the plan and wasn’t given a new quote. He had done part of the job and I paid for it and he was to do the rest after I had the installation finished. After everything was installed, somebody else working on that area wanted to meet with him to coordinate their plans and he didn’t show up. Later he showed up and said he had been really busy and would be there next time. The other guy comes over to find Oscars guys setting up the forms. The guy told them to stop, because I needed to know what the cost was as I didn’t need any concrete in that area anymore but I had extended another part and asked that Oscar call him. Oscar did not call or return any of the ten messages that he had left for him. The new work that was done had cracked and I had called Oscar, he said they would fix it when they did the rest of the work. The other guy had showed them the cracks to be fixed and they didn’t do anything. I found out I had been way over charged for the partial job and he evidently has no plans of finishing or fixing the cracks that happened less than a week after the work was done. Oscar had told me I needed to have the area leveled. I thought it was odd that he would not have done this as part of the job, but I figured he probably didn’t have the equipment. Totally forgot that he had done large jobs before. I was so sweetly informed that he does have a tractor to level the job area. I now have to find somebody else to finish the job and pay again to fix his cracks. And pay to level the area again as the weather has moved the dirt around. I don’t know what happened with him because he was always there to give quotes, not many contractors even show up to give a quote or return calls after saying they will get back to you with a quote. I liked the fact that he was reliable about that, but this last experience just showed me that he is no better than anybody else that takes advantage and overcharges. He didn’t count on anybody helping me that knows about what the job should cost according to the average cost of cement. Once he found out my situation, it was “I’ll give you a good price”, won’t fall for that again. Should have said he’d give me the suckers price. I am very disappointed in him. He had been fair with pricing on the last jobs, but this time he took advantage of an old customer and lost a customer that had other jobs that needed to be done.

Oscar and his crew demolished and removed the existing concrete, built up the sub-base with decomposed granite, compacted it, and poured new concrete to match the existing sidewalk. They extended the sidewalk to the driveway and formed an almost imperceptible swale in the concrete to channel the flow of water from a gutter down-spout to the driveway. Previously, water from the spout had simply been absorbed by the ground at the edge of the house promulgating the subsidence of the subsurface and deformation of the old sidewalk. Oscar even provided the PVC tubing to realign the irrigation system and replacement parts for a water valve. I am very pleased with Oscar Construction and look forward to working with Oscar next Spring on a new project.

Description of Work
Part of the sidewalk around my house had subsided and buckled over the point where the electricity and water connections from the street entered the foundation.

I obtained 3 bids for this job, oscar came back over $1000 less than the competition. *I should mention that Eaton Concrete did not even call me back! As requested, Oscar gave me different options (as I wasn't sure of my direction) for the wall with cost estimates for each. When it came to getting the job done, his schedule was extremely flexible (a dr.s visit came up first time around) and was willing to work with things we had going on. He works with his nephew Alejandro, and are both very knowledgable. Alejandro did the majority of the dirt work on their john deere midsize tractor. Alex listened to my concerns regarding the dirt moving, and followed directions well. Overall the project took 15 hours from start to finish. They laid the first course of block straight as an arrow in a very small footing of concrete (for strength). Then every course after that seemed like a breeze. Oscar even did a 90* turn at the end of the wall that I hadn't foreseen. It added a nice finishing touch to the wall, instead of just ending, and falling off. They worked with no breaks except for lunch. I was extremely impressed with the efficiency in how they worked. Overall, I couldn't be happier with the end result of the wall. I want to thank Oscar and Alejandro for the great job. I WILL be calling them to come back and pour concrete slabs in my backyard (save my time not having to collect bids!). I rated Oscars punctuality a "B" because he did show up a little late for our appointments (but not on the day of Work). This is a small price to pay for saving $1000+ on a project! Hire Oscar and Alejandro with a sense of relief knowing you are saving A LOT of $$$$ and getting just as good a result!