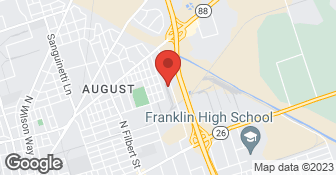 We professionally install, service & repair HVAC systems. Give us a call today....

The guys were all on time. Staff was friendly. Installation went fairly smoothly and the new product works great. Rod Johnson has a manufacturer produce their own line of products, which they offer a 15 year warranty on. New system is very efficient. The only drawback was the demolition guys left a slight mess in the hallway during the removal, but they cleaned up most of the mess themselves.

Description of Work
Replaced all ducts and returns. Replaced condenser and furnace. Turned single thermostat into a two zone system.

They were very professional and the job was well done.

Description of Work
They recharged my AC unit

They seemed to be okay. They also gave me an estimate for my air conditioner. They were professional, quick to figure the problem and cleaned up themselves. They did an outstanding job and may use them in the future.

Description of Work
I used the services of Rod Johnson Air & Windows to fix the heating unit, 11 April, 2011.

It was a total rip off. I am glad I have the air conditioner. The new heater installation was not done properly. I am having someone else come out to fix the problem. I was supposed to get a rebate, but I didn't because they installed the wrong heater. I don't think they overcharged me; but I feel I was overcharged for the work that was completed. They guy who installed the unit was clean an punctual.

Description of Work
They installed the air conditioning unit.

I was having some problems with my home warranty company, because the companies that they continued to send out to repair my air conditioning unit were not able to complete a repair. My unit was broken for a month. The companies that were sent out installed a capacitor and a hard start kit that my system did not need and they were unable to keep the fan running. So when I called Rod Johnson I got a hold of a manager and explained what the other companies had done and what kept happening with the system. I told him that there was a loud noise, the system shut off, and I could hear a hissing noise. He knew immediately what was wrong. He took the information for my unit and called the manufacturer. They were told that my unit was still under warranty and they were able to have the fan motor sent out. They called me back and told me when they would get the part and when they would be out. They put me on an emergency list, because I have asthma and my husband has a heart condition. They continued to touch base with me throughout the process. The technician that they sent out to complete the repair was above and beyond. Fortunately they were able to complete the repair just before the really hot heat. They went above and beyond. I canceled my home warranty and decided to just go with them for any repairs. They are a Better Business Bureau company as well. I will absolutely continue to use them in the future.

Description of Work
Rod Johnson Air & Windows came out to replace the fan motor in my air conditioning unit.

I have nothing but praise for Jack who did the estimation work. I suspect this job was bigger than they are used to as although the basic installation was done quickly, it took a couple of months before all of the city inspections were passed successfully. They stuck with it and made all necessary corrections. The new system works well!

Description of Work
Removed old furnace from hall closet, AC, all ducts. Installed new 95% efficient Amana furnace, coil and 13 seer AC unit. All new ducting, enlarged one return and added a second. The furnace was relocated to the attic crawl space to free up a hall closet. The gas line had to be extended to the attic and a service platform built there along with a service light and new electrical circuit.

THE EXPERIENCE WAS A PLEASURE. THEY DID A VERY GOOD JOB. THEY ARE ALWAYS PROFESSIONAL. THE EMPLOYEES ARE VERY COURTEOUS. THEY SHOW UP AT THEIR APPOINTED TIME TO DO THE CLEANING.

Description of Work
THEY CLEANED THE AIR DUCT SYSTEM IN OUR HOME.

Free Consultations!! Over 20 years experience with owner involvement on every job. Servicing the Sacramento County and San Joaquin County community, Schatz Construction & Restoration is a comprehensive local provider of exquisite residential and commercial remodels, flawless new construction builds, and seamless additions. Focusing on quality and service, we want our customers to be happy with the work we do. No matter the size or complexity of the job, we always aim for complete satisfaction and delivering the kind of final results that drastically improve your property. Your new construction or remodel is right around the corner.  …

“Bell Brothers Plumbing Heating and Air was founding in 1991 in Elk Grove, CA by brothers Kenny & Jerry Bell. After almost 30 years in the business, Bell Brothers has expanded to not only specialize in heating and air services, but windows installation, plumbing, sewer, duct work replacement and insulation. With more than $5,000,000 in Home Energy Upgrade rebates earned for their customers, Bell Brothers has established themselves a leader in California’s Home Energy Upgrade Program for utility companies SMUD and PG&E. Today there are over 160 trucks on the road and over 200 employees daily serving the greater Sacramento area and parts of seven surrounding counties. It comes to no surprise that Bell Brothers delivers 365 Days of Satisfaction to all their customers by providing the highest install standards, the best trained technicians and year-round service. Bell Brothers guarantees that you’ll love your service or your money back, that’s what makes them the “No Surprise Guys!”  …

No, Rod Johnson Son Air Inc does not offer warranties.