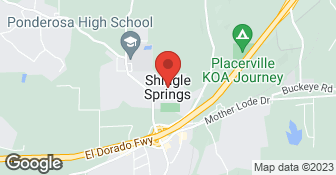 Steven M. Wilson Concrete is unique to Sacramento providing custom concrete and design. Steven’s artistic abilities set the stage for a dramatic presentation of your home and outdoor environment. With unique, expansion joint patterns and concrete coloring and staining processes, we produce some of the most exquisite concrete surfaces....

Hello, I'm Terri Harris and I'm the president and founder of SHEcan2. We are a remodel/repair/design home improvement company. Our services range from fixing that loose towel bar in the hall bath to adding on a new master bedroom suite. We also do rental property maintenance and commercial tenant improvements. We are in the business of seeing your project through your eyes. By listening to your ideas and understanding your budget and time allowances, we're able to better understand how we can help.  …

We have the experience and dedication to bring your dreams to reality! Specializing in Wood Deck & Patio Services SPECIFICALLY WOOD & COMPOSITE DECKS! we guarantee your satisfaction, and we won’t leave until the job is done right. We pride ourselves on the quality work we provide, while delivering great customer service! Call or click to schedule a free estimate today! Ask about our special Angie's List discount!  …

Our mission is to provide personalized, excellent custom concrete work for our clients. No job is too small, we do it all. The owner, Victor Rivera, has over 20 years of concrete construction experience. He personally supervises all jobs and specializes in custom residential projects. The special care he applies to all his projects results in beautiful and excellent quality workmanship. V. Rivera Concrete will give you exceptional value for the quality work you receive.  …

Steven Poured over 700 Sq Ft. of beautiful concrete for us back in September. He used two colors stamped and sealed. Unlike other contractors Steven spent the time on our first visit to not only understand our vision but to use his artistic vision to help guide ours. The finished product has provided us with lots of outdoor enjoyment. We have had several landscapers come to quote the rest of the yard and all of them have commented on what a good job was done. I would highly recommend Steven.

He is great at what he does. He was on time. He designed everything for us and he is very creative. He provides excellent quality of work. He took a lot of time to listen to our needs to be clear on what we were wanting. He has great vision and passion for what he does.

Description of Work
He laid the concrete for our patio.

We were gone on vacation before the agreed project start date and came home to find everything completed as promised. The walkway ended at a new side gate which unexpectedly had to be modified by cutting off a small portion across the bottom of the gate to clear the new walkway. This was done by Steven at no addition cost and without project delay.

Description of Work
Created a stamped & colored concrete walkway that extended across the front of our home from a walkway and driveway previously completed by Steven M. Wilson Concrete two years earlier. The new walkway matched both the design and color of the original work extremely well.

Steven Wilson was the sub contractor who poured an exposed aggregate concrete pad around a portion of our pool and spa. THE EXPOSED AGGREGATE CONCRETE DECK = A The major challenge was making the new deck match the exposed aggregate deck that had been in place for 30 years. Steven did a more than excellent job at matching the exposed aggregate stone color, texture and overall look. He did some additional work in acid washing and sealing the deck to make sure it had the same appearance of the existing pool deck, which is very difficult to achieve having seen other contractor's work. There was one particular area that needed extra effort to make sure it matched the existing form/shape of the pool. I had to question this area several times and Steven worked on it until it looked good and matched my expectations. I appreciated his extra effort. We are very happy with the result of his work. THE PROCESS = B- Steven was always willing to do whatever we asked him to do. All we needed to do was point out any problems and he would fix them. This is the one place that was not as customer friendly. I didn't like having to keep pointing out things that were wrong -- Steven is truly the expert and I wanted him to tell me what his plan was to address any issues. In one case, we thought he was finished with the work and he had advised us that acid washing the deck would help expose the aggregate more. So we did that. Then two days later, he shows up with his crew to acid wash the deck (a stonger solution than we had used) and it did turn out even better. We were very appreciative of the additional work that he did to make the deck look better, but if we had known he was going to do that, we could have saved our initial effort. Steven emphasized that he wanted to make us happy, He would ask us what we were unhappy with or what things needed to be cleaned up. Sometimes his response was that he had already planned to take care of that issue, but he didn't communicate that until we asked for it. Granted, the general contractor should have been the one overseeing the whole process so we did not have to be the quality control inspector, but to a certain extent I expected Steven to be his own quality inspector and tell me when the job was done. Again, we are very happy with the results of Steven Wilson's concrete work (which is most important) but felt the process could have gone smoother.

The resulting work done by Steven has generated positive comments from neighborhood walkers we don't even know. Comments such as and quot;your new concrete really looks great and has definitely increased the value of your homeand quot;. Steve has an artistic eye and successfully creates an attractive entrance to your home. Our upgrade also included the resurfacing of our pool and Steven managed the selection and coordination of the sub-contractors who completed this work in a way that made progress flow smoothly. Of particular value, I appreciate a contractor who can be depended upon to be on site when he says he will be and is present during all phases of the job, even to the extent that he stands in the middle of the pour to observe and direct the process. At times, we had some reservation in proceeding with some of Steven's suggestions, but in every case, his ideas were right on for this application. We definitely would use Steven again. As a matter of fact, he is currently scheduled to apply the reseal to the concrete.

I have to say that Steve was the best contractor I have ever worked with. Steve was professional, knowledgeable, punctual and communicative. My wife and I sent Steve a picture of what we wanted our concrete to look like when it was all finished and I have to say Steve NAILED it. The finished concrete has come out better than we could ever imagine. We also has an area in our yard that needed to drain under the concrete when it rains. I was just going to put a drain under the concrete. Steve came up with an idea of having a concrete bridge and it came out fantastic!! Steve would also call other contractors for me to keep me in the loop on everything that was going on. Steve was involved in everything. When I say everything he was standing over everyone on his crew and was present all day every day his crew was at my house. When Steve would say he would be at my house at a certain time they would be there. Steve and his crew also cleaned up everything after themselves. I would highly recommend Steve to do your concrete. Not only does Steve use the best concrete and products he is an artist at what he does.

Before I submit my review, it's probably gonna go into litigation, he destroyed my backyard.

Description of Work
Steven M. Wilson Concrete is the worst contractor I've ever dealt with out, he's horrible. He worked for me on April 1st.

Concrete foundations, mud jacking, small jobs less than 300 sq. ft. are not cost effective other contractors can provide these services.