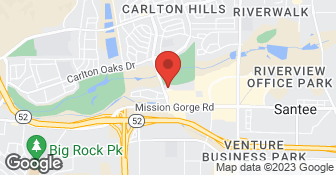 Countywide Property Inspections is a locally owned company, run and operated by experienced inspectors with long standing roots in our community. We have been in continuous operation since 1998 and have focused exclusively on performing inspections in the San Diego and South Riverside County areas. We are proud members of the California Real Estate Inspection Association, the San Diego Better Business Bureau, the Chamber of Commerce, and several other organizations which establish, promote and require of its members, the highest levels of ethical behavior and professional conduct....

Initially I thought they did a good job because Rich was very professional and seemed to know what he was talking about. He clued me in to several things that needed repairs or attention. However he missed one EXTREMELY important thing that has now required me to pay more than $6000 in repairs, to have to miss work to be home and have guys working in my house for 5 days, and also to have to arrange for my baby to be out of the house. Rich went into my attic and checked out my AC unit, but he never opened the unit to look inside (which is fine because I'm assuming that's out of the scope of the inspection). However when I had my AC evaluated later, it turns out there is a SEVERE case of mold in the AC unit which has been growing throughout the entire ductwork of the house. I'm not saying the he was supposed to open the AC unit, but it was CLEARLY evident to any professional (and especially to an inspector) that the mold was growing on many of the vents. All you had to do was look at one of the vents with a naked eye and you could see mold growing on it. I saw it clearly once I was directed to look at it. If you put a flashlight there, it was even more evident. Here's the reason I blame Countywide Inspections -- if they had simply LOOKED at any of my vents they would have seen it and could have recommended that I have someone else (a specialist) come and inspect it. Even thinking about mold makes me sick so I would have definitely done that, and if I knew then what I know now, I WOULD NOT have bought the house or I would have insisted that the previous owners reduce the price by $6000. I just can't believe that any competent inspector would FAIL to simply LOOK at the vent registers. When I called Countywide back and questioned their inspection, they sent someone to come and take pictures, then they sent me a letter saying that they are not responsible. I disagree - they are responsible me buying a house that I would not have bought if I had a proper inspection. Otherwise, what's the point of the inspection. Do not hire these guys. Also, I would strongly recommend that you have the house and ductwork inspected for mold before you buy a new home!

Description of Work
Home inspection prior to purchase of home.

Tom was superb. He had been recommended to me by two different friends who had used his services in past year or so. WOW - I wish I could hire him for every facet of this homebuying process. I called the office to make an appointment - spoke with Briana (sp?) - she was friendly and professional. Got me the date/time I needed and asked me the pertinent questions they needed to provide a precise quote. Tom was at the house when I arrived. He had an ENORMOUS checklist of items to review along with a ladder, coveralls for delving under the house, a camera, all necessary equipment. He explained what he'd be doing and I left him in peace.When the inspection was complete - and mind you I probably could have shadowed him every step of the way but I elected not to - he sat down and talked me through EVERYTHING. He was not an alarmist but very precisely spelled out the good, bad and scary components of what he found at the house. He explained items that no longer met code, average life expectancy of standard items and was clear not to try and sway my decision about the house in either a positive or negative way. He took copious photos that will be included in the on-line report that I can access in the next day or so. I avidly watch Mike Holmes and I really felt like Tom took equal pride in his ability to share what he learned about the house with me and what issues I need to be aware of - stuff I would NEVER have found. I am much more educated about the home and can make an informed decision now.

During the inspection there were many distractions so my husband and I were unable to follow the inspector, Tom. He didn't want to go in the crawl space even though we paid an extra $75 for him to do it, he missed really obvious things like broken glass in several windows, missing screens on 8 windows, missing caulking around sinks, counters, etc, broken or missing fixtures, detatched handles for ALL sinks, and bathtub and shower. He did pick up the fact that our electrical wasn't ''up to code'' and tried to give us a business card of his (his other job is an electrician or electrical contractor.) When we called a (3rd party) licensed electrician to review the things that Tom said were not ''up to code'' he told us that everything was fine except an outlet. I called the office a few weeks after the inspection to let them know we were disappointed and they were very professional. I just wish Tom would have found all the items in need of repair before escrow closed.

Description of Work
Inspected house prior to purchase.

Inspector was very professional and caught a few items, he made himself available for a phone call later to answer further questions, overall report had decent/average detail and was easy to read.

The inspector showed up on time and went about his business in a professional and methodical way. He was very thorough, and offered sound advice and simple fixes for the majority of the issues he found. Highly recommended.

Description of Work
Countywide inspected a property I purchased. They did an excellent job.

HE WALKED ME THROUGH THE HOUSE POINTING OUT PROBLEMS. WAS VERY . I WOULD NEVER HAVE THOUGHT TO LOOK AT ALL OF THE THINGS THAT WERE POINTED OUT. I AM GRATEFUL THAT THE SELLER GAVE ME THE OPPORTUNITY TO MEET WITH THE INSPECTOR AND READ THE REPORT.

Description of Work
THE SELLER OF A FIXER HOME THAT I CONSIDERED BUYING. HIRED COUNTYWIDE TO INSPECT THE HOUSE AND CONVERTED GARAGE.

ARRIVED EARLY. WAS QUICK AND THOROUGH. FOUND A WAY TO ACCESS THE CRAWL SPACE (WHICH WASN'T EASY). CAUTIONED BUYER THAT THERE WAS NO STEM WALL TO SUPPORT AND EXPRESSED CONCERN THAT THE FLOORS WERE NOT EVEN.

Description of Work
INSPECTED A THREE-BEDROOM, 2-BATH HOME WITH A SCREENED PATIO. EXAMINED ROOF, PIER AND POST CONSTRUCTION, INTERIOR AND EXTERIOR OF HOME.

THE INSPECTOR WAS PROMPT, GOT RIGHT TO WORK AND WAS VERY THOROUGH IN HIS INSPECTION. WE WERE GIVEN A DETAILED LIST OF ALL ITEMS AND CONDITIONS. A LIST OF SUGGESTIONS WAS INCLUDED, AS WELL. GREAT SERVICE.

HE WAS VERY THOROUGH AND KNEW WHAT TO LOOK FOR. HE TOOK HIS TIME AND WHEN HE WAS DONE, HE EXPLAINED ALL THE PROBLEMS. HE GAVE US SUGGESTIONS ON WHAT NEEDED TO BE DONE AND WHAT PROBLEMS HE WOULD FIX HIMSELF.

Description of Work
HE CAME TO THE HOME WE WERE INTERESTED IN PURCHASING AND INSPECTED THE INTERIOR AND THE EXTERIOR FOR ANY PROBLEMS THE HOUSE MAY HAVE HAD.

INSPECTION WAS SCHEDULED PROMPTLY, MUCH FASTER THAN I THOUGHT WAS POSSIBLE. INSPECTOR WAS ON TIME FOR APPOINTMENT AND WAS VERY THOROUGH. THE PRICE WAS ABOUT HALF OF WHAT MY REAL ESTATE AGENT ESTIMATED. I WAS VERY PLEASED WITH THE PERFORMANCE OF THIS COMPANY AND WILL DEFINITELY USE THEM AGAIN IF I PURCHASE ANOTHER PROPERTY.

Description of Work
INSPECTED EXTERIOR, INTERIOR, ATTICS AND CRAWL SPACES IN HOME THAT I WAS CONSIDERING PURCHASING.

Give us a call to request an appointment today!  …

We are one of the premier home inspection companies in southern California serving San Diego, Riverside, and Orange counties. Buyers and sellers of real estate from Coronado, Chula Vista, San Diego, Del Mar, and La Jolla in the south to San Clemente and Riverside in the north, and from the coastal regions of Encinitas, Carlsbad, and Oceanside to the inland areas of Temecula, Murrieta, Fallbrook, Escondido, Rancho Bernardo and Scripps Ranch can benefit from the experience and expertise of a highly credentialed inspector. Receive a FREE lifetime appliance RecallChek with every standard home inspection! We are also proud to announce the Home Owner's Network (HON). Clients receive a FREE one-year HON membership- that's live technical support for your home! Steve Stenros is an independent property inspector holding the following credentials: Master CREIA Inspector #0115, ASHI Certified Inspector #256853, ICC Residential Combination Inspector #5251439, Level 1 Infrared Thermographer #7791, FHA/HUD Inspector #V975, 203K Consultant #S0611.  …

Bonded
Insured
All statements concerning insurance, licenses, and bonds are informational only, and are self-reported. Since insurance, licenses and bonds can expire and can be cancelled, homeowners should always check such information for themselves.To find more licensing information for your state, visit our Find Licensing Requirements page.
General Information
Free Estimates
Yes
Eco-Friendly Accreditations
No
Payment Options
Visa, MasterCard, Check
Warranties
Ask for details

COUNTYWIDE PROPERTY INSPECTIONS is currently rated 4.6 overall out of 5.

No, COUNTYWIDE PROPERTY INSPECTIONS does not offer eco-friendly accreditations.

No, COUNTYWIDE PROPERTY INSPECTIONS does not offer warranties.