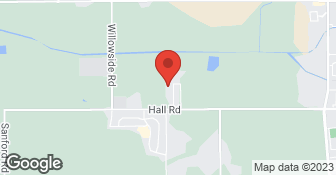 Rooter-Man of Santa Rosa, CA is a plumbing and drain cleaning company that's locally owned and operated by The Morales Family. We service all of Santa Rosa, CA and surrounding communities, and strive to provide the best customer service experience you will find. Whether your service is as simple as routine preventative maintenance, or is as urgent and complicated as emergency plumbing repairs, Rooter-Man is here to solve your plumbing, sewer, and drain problems with as little as a phone call....

Easy to set up an appointment, friendly and professional. Arrived on time and got the job done. Would use again and recommend.

Description of Work
Hydroscrub the drain line to clear a near complete blockage.

Plumber arrived on time. Plumber fixed problem, but took all day. Initially plumber said estimate was fixed price but later adjusted the price upward because he ran into issues with the repair. Quality of work fine overall but not happy that the final price was different then the price estimated.

I called Tony at approx. 2PM. He answered and said he could be here within the hour. Exactly one hour after my call, Tony was at my door. The job took less than 5 mins and the toilet was unclogged. I used the 5% off coupon available for his company on Angie's List. He was very professional and friendly. I will definitely recommend Rooter-Man Plumbing to neighbors and friends.

Description of Work
The toilet in the master bath was clogged.

Tony came to my house on the day after Thanksgiving, less than one hour after I called! He tried to clear the jam from my disposal, but unfortunately the unit needed to be replaced. He had the work done quickly, was very professional, efficient and friendly. I felt completely comfortable having him in my home and would definitely recommend him and hire him again.

Tony arrived on time and was terrific. He addressed the faucet issues and both drains - we felt the price was very reasonable. Most of all, he was extremely pleasant and professional; the quality of the service was terrific. Tony took his time and answered all of our questions in detail. We feel really lucky to have found him and hope to be a long term customer.

Description of Work
We needed multiple drains unclogged and poor faucet flow addressed in two faucets. In addition, Tony assessed a poorly functioning shower head in another bathroom and helped plan for replacement.

He found the problem and fixed it. What impressed me the most was that he answered the phone and was able to help me within an hour. Even if he wasn't able to help me within the hour, it was important to me that he answered his phone. I called 6 other plumbers before Rooterman and none of them answered their phone or called me back before noon. I started calling plumbers at 8:00 a.m. If you want someone who has good old working ethics, Rooterman is the plumber to call. I will give their card to everyone I know who owns a home.

Description of Work
Fixed what I thought was a broken faucet

Tony arrived very quickly, exactly when he said he would. Figured out the problem immediately and took care of it right away! Very friendly, professional, and knowledgeable. Made it look easy! I called the right person, and will absolutely use him again.

Description of Work
Leak under my bathroom sink.

Tony handled the job magnificently. We had a difficult plumbing problem, and Tony took care of it in less than 3 hours. Excellent service for an excellent price.

Description of Work
Solved a tricky plumbing problem with ease

Tony answered his phone on the first ring, gave us an estimated arrival time and evaluated our situation free of charge. This was after I called several plumbers who weren't open, had answering services screening their calls or charged to provide estimates. It was refreshing to reach Tony so quickly. He is a sole proprietorship with a family at home so he is likely a busy man, but he was courteous, prompt and very quick. He fixed our clogged drain all the while explaining exactly what he was doing so we could do it ourselves next time, and he provided some helpful tips (no eggshells in the disposal). He offered to fix a broken drain we had and for a brief moment didn't have a necessary gasket. He was willing to drive down to Garret's to get one. Turns out he did have one in his truck, but the anecdote demonstrates his commitment to service. Barb says to mention he was conscientious about leaving the kitchen as clean as it was when he arrived. We give him a thumbs up!

Tony was fantastic. This was the first time I've used Rooterman. I phoned 4 plumbers on Friday, including some who've I've used before. No of them returned messages or picked up. Called Tony on a Saturday morning b/c he has emergency repair listed on his profile, and he was the only one who actually answered his phone! Said he could be at the house in an hour, and was there in 40 minutes. Did a great job soldering a 90 degree copper transition (~12inch x 12inch) that connected the threaded PVC transition coming from the street to the pressure reduction valve on the house inlet. No leaks and the job was done quickly and professionally. He even fixed an irrigation pipe that I had to cut out to jackhammer the concrete around the copper supply line (the rocket scientists who built my house poured concrete around the supply line coming from the street). He's now my #1 go to guy for both my rental property and home.

I appreciated that the plumber, Tony, arrived right away. He did a great job of explaining what the problem might be and what he could or couldn't do. But he had the problem quickly fixed. I will definitely use Rooterman again. He was professional and fair.

Description of Work
We called Rooterman because we had no flushing toilets and everything was backed up. The plumber was able to quickly fix the problem with the septic tank and get things flushing again.

Rooter Man is punctual, reasonably priced, and is reliable. They take care of our routine maintenance as well as emergency issues, as this was. We had a plugged toilet and they were here within 5 hours, snaked the lines, and replaced the appliance. I have been working with the owner of this company for 8 years. I would not have anyone else on this property. We are a 59 unit apartment complex and it is very important to have a quality vendor. And we are very fortunate to have found Rooter Man. I cannnot recommend them enough.

It went great tony the technician was to my house with in the hour great prices very professional. I would definitely call rooter man again and recommend them to anyone

Description of Work
Main clean out

When I made the call he showed up within 2 hours and he gave me a price on the spot. He told me he could do the job within a week and he did! He cleaned up after himself and he did a great job. He was clean, articulate and presentable. I would recommend him to anyone.

Casey Post is the Owner / Operator and has been in the industry for over 17 years. If the water won't go down, we'll make it go down.  …

As a plumbing company we do drain cleaning, emergency services, new plumbing for a remodel or new construction. We have the experience and dedication to get the job done right! Specializing in Plumbing services; We guarantee your satisfaction, and we won't leave until the job is done right. We pride ourselves on the quality work we provide, while delivering great customer service! Call or click for your FREE estimate today! No job is too big or too small. We do it all at U.S.P.! Now offering Cured In Place Pipe Relining, ask for details!  …

How is Rooterman of Sonoma County overall rated?

Rooterman of Sonoma County is currently rated 4.9 overall out of 5.

What payment options does Rooterman of Sonoma County provide

No, Rooterman of Sonoma County does not offer eco-friendly accreditations.

Does Rooterman of Sonoma County offer a senior discount?

No, Rooterman of Sonoma County does not offer a senior discount.

Are warranties offered by Rooterman of Sonoma County?

What services does Rooterman of Sonoma County offer?