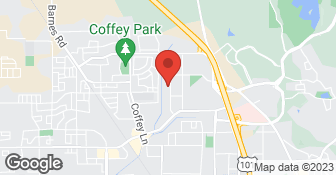 Moore Home Services is an award winning, family owned & operated business serving Sonoma, Marin & Napa Counties. We provide expert service, repair, design & installation of all your residential & light commercial heating & air conditioning needs. Matched with our industry leading customer service and system evaluations, we are the "Best Value for the Dollar" company around. Please contact us today for your FREE system evaluation! We look forward to meeting you!...

I've been using them for 10 years. Very thorough and honest. Transparent and on time. They actually did more from what I expected. They technician are quite knowledgeable. Also, they guarantee their job because they want the 100% customer satisfaction.

Description of Work
They did the plumbing, heating and air-conditioning.

Hi there, we are very happy to have provided you with such a positive experience! Please let us know if there is anything else we can do for you; we are more than happy to help!
5.0

Moore services my HVAC every six months. The crew that came out for my recent call, have been to my house before. Nice to see familiar faces. My main sewage drain clogged in front of my house at 4:50 pm. I called Moore and you’re team came out in 30 minutes. The crew had it unclogged at 5:40 pm. I couldn’t believe it. I was considering taking my family to a hotel. With that clog, staying in the house was not possible. You guys are awesome!!!

Description of Work
You guys are awesome!!!

Great. They were very thorough, checking the air ducts, measuring the temperature of the air leaving the ducts, and explaining the problem to me. I received a call the day of the appointment refining their ETA, got a call when they left their previous appointment and received an accurate final ETA. The workers wore masks, had uniforms, identified themselves, wore disposable booties in the house, were very professional and courteous.

Description of Work
Checking the functionality of a heat pump / air handler.

Hi, your wonderful feedback and rating mean a lot to us. We hope to be of service to you again in the future. Best wishes, Moore Home Services
5.0

Very well. Mike and his partner, Emanuel, were very polite and Efficient. They were informative about my option. Good guys, also

They installed new heating system and part of the contract was to repair ductwork. They did not. When I called they came back to look at the issue and NEVER contacted me again. Ductwork is on the ground and I have to Pay someone else to repair. Salespeople will tell your whatever you want to hear. Beware

They provided an estimate which was broken down very well, responded quickly and were professional.

Timely, one pickup that was corrected and another that has taken too long and still not fixed. It is supposed to be taken care off soon.

One of the best service people we have had in our home, ever. This woman knew what she was doing.

Description of Work
Cleaning and testing my home's heater

Fine. Service was prompt and efficient.

not enough hot water originally. return visit much better. a faucet clogged after instillation. replaced at no charge

Pushy salesmen trying to upset and too expensive.

Description of Work
No work was done

Mr [Member Name Removed], Although we do not have a record of us providing services to you in December or providing a quote for heating and air conditioning we do see that we visited you in July to discuss solar options. We are alarmed by this review and will be reaching out to you directly today. We strive for 100% excellence in all of our interactions and promise to take corrective action immediately. Sincerely, Melissa Cheney
5.0

They were on time, respectful of our home and extremely neat. This was a two day job and when they left you would not know they were even here.

It was fabulous. They did a great job. There was just one tiny little bubble I wouldn't have like to have seen them do. They put in a new thermostat, which I love, I can control it with my thumb. I can be upstairs and turn the AC on. But the wiring to where the old thermostat was wasn't quite capable of having the new thermostat which could've controlled more stuff like the 2 stage and so on. It wasn't adequate. They could of fished the wire through but they didn't want to do it but that wall has a mirror backing. I think they should have done it. I heard the objections but I didn't insist because I thought if I insist they are sure, just because this is the way things go, they will crack the mirror anyway. I think they could of done it if they were careful enough. I had a feeling their price could've been better but on the other hand, they're reliable, honest and have great guarantees and stuff. They do have a warranty, no questions asked, if you don't like it, we'll pick it up. But I'm thinking, if they did that, where would this get them? They hauled my old furnace off long ago. Definitely an A on professionalism. I would use them again, in fact, that's how I knew about them. Every year they've had this $19 coupon thing where they come out and service your AC and your gas furnace. I used that a few years in a row and I really liked that they'd say, "your furnace is getting a little old, you should probably think about replacing it". But they were not at all salesy, pushy, have to replace it now. So when it started making alarming noises, they were the ones I called. 2 workers came to install the unit.

Description of Work
It was for a 2 stage furnace. They installed it. They hauled out the old unit and also removed all the old ratty fiberglass installation and replaced it with literary shiny new metal type wrapping which looks very neat and tidy.

There was no charge.? That was under the warranty.? They're awesome.? They did charge me for a new filter because it needed one.? I thought I'd go ahead and have them replace it because they were here. I was kind-of hoping that it would be included, but it wasn't. That's their standard practice.? It would be nice if it was part of that free final test, check-up, whatever, that they did a free filter.? I will also be taking advantage of their $19 check-up every year.? They also have a thing you can pay $15 a month and that includes all check-ups and stuff and if you have a repair, you get a discount.

Description of Work
After installing my furnace, they did a follow-up after, I think it was after 4 months where they just checked to see how things were doing. They kind of fine-tuned a few things, I don't know, technical stuff, it was costing me more gas than it should have, and they adjusted some of the jets or something.

They're great. I can't remember the cost.

Description of Work
They gave me an estimate because I was having a leak from the air conditioning and they fixed it.

I wasn't there that day. My experience with them has been very positive.

Description of Work
I got a new furnace from them.

They won't work on wall heaters unless they install them.

Description of Work
Service at another property

I would recommend them. I am satisfied with them. They did it on different addresses I have. Pricing is fair. There was just one guy for about an hour.

Description of Work
Cleaning, servicing, tune up, and inspection

They were fine. There was no charge for the estimate. Our house is three floors of open architecture so it just didn't work for us. Yes, we would use them again the future.

Description of Work
They came in and gave us an estimate.