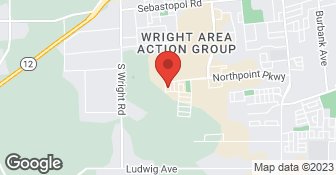 MoonDance Painting is your source for superior quality painting services and unmatched customer service. We specialize in using low- and no-VOC paints as well as environmentally friendly painting practices - minimizing waste, using non-toxic cleaners and materials, and disposing of wastes properly. Contact us today to learn what we can do for your home....

Many items were not completed as per contract. House started peeling in places after 2-3 years. Trim work was never prepared correctly and therefor bubbled up in spots. I am sorry, but I can not recomend this company.

At $90/hour this is the most expensive painter my wife and I have come across in Marin County. (other licensed painters generally charge closer to $50/hour). The quality of their work is, in our opinion, averge at best. After several jobs, the owner convinced us to use a time materials-based contract "to save us money" - which it did not. It's also contrary to the California Contractors Licensing Board's contract rules. As part of their last job they charged more than $2,000 to paint a 50 square foot bathroom - a bathroom this company had painted just 2 years ago - the paint was in good condition and very little prep work was needed. On the same job we discovered that their crew was leaving early but we were being charged for a full days work. The owner admitted we were correct and took a small amount off the bill to compensate for the overcharges. Following that incident (which was not the first time we had been overcharged) we asked that the crew and crew chief be replaced. The owner insisted that the chief and his assistant remain on the job, despite the fact that the chief was responsible for reporting their hours. We decided we would never hire them again. I am embarrassed to say we worked with this company on more than one occassion despite their crews leaving garbage in our hallways - from paint cans to fast food wrappers - blocking access to our garage with ladders and other equipment (despite their having been provided with a storage area about 5 yards away)...and other issues. Generally 2 or 3 complaints would result in these issues being resolved. But having them happen at all is unprofessional. We did not include our address - we used theirs - "Doolittle Street," - to protect our privacy. Plus the irony is obvious. Again, this is our experience with them over a two year period. Perhaps your will have a better one. We are not painters and do not claim to know the business. But we have worked with many over the past 25+ yeatrs. Unfortunately, this was not one of the better ones.

Description of Work
restoration and painting of 1925 bathroom in a cottage.

It went pretty good. They did a very good job, but it took a very long time to get an appointment. Their issue is that they overbook and they are not down here so it takes them a long time to get the job done. They did a very good job and were quick and neat. It was a small job. They need to improve their scheduling and their appointment management. I think their price was fair.

Description of Work
They did a little bit of wallboard/drywall work and patched a hole. They did do some interior painting.

The service and price were excellent. They were very responsive and we were especially pleased with the interior painting. We think it looks great.

Description of Work
We did a pressure washing along with interior painting.

The service for the big deal from MoonDance Painting went fine, we didn't have any problems. It took me a while to get in with them. The total cost was just the amount of the big deal cost. The best part I would say is probably the personality of the persons that I worked with. I believe it was the owner that came out and originally looked at the project and the employee that he sent to work on the drywall were both friendly, very easy to talk to, showed up on time and that kind of thing.

Description of Work
I purchased a big deal from MoonDance Painting. The big deal was for $175 for four hours of drywall plaster repair with interiors. They did drywall repair.

I've used them more than once. I did three different projects with them.

Description of Work
They just did interior painting for me.

They were very professional and did a nice job. They provided extra service.

Description of Work
I purchased a deal for $175 for four hours of wallpaper removal.

Steve, Moondance Painting owner, took his time to make his estimate and to schedule the work. That was no problem until the last few days when our travel schedule got in the way. But a few phonecalls later we had a firm work date. On the work day, Steve's painter missed work. So Steve appeared, assessed the situation and got a replacement painter to arrive just a couple of hours later than originally planned for the 4-hour job. Realizing the problem, Steve did the best he could and it worked out surprisingly well. The actual painter who showed up was a nice fellow and did a good job. But he did not understand the job extent well and we had to convince him to not only remove the wallpaper but also prime. He tried to communicate in English but that is obviously not his first language. I was a little surprised that the wallpaper steamer (was it rented?) did not come with a cord, but I had a spare office machine cord that worked fine. I was also surprised that we supplied the primer (I was hoping that Steve would have a more definitive solution to painting over wallpaper residue than what Home Depot suggested on the 3rd try for an adjacent area we completed ourselves), but we did have plenty of primer on hand. The final price was fair for the 2.5 hours of work completed.

Took less than one day, even though the salesman estimated a two-day job. One man did it all.

We have the experience and dedication to get the job done right! Specializing in Pressure Washing services; We guarantee your satisfaction, and we won't leave until the job is done right. We pride ourselves on the quality work we provide, while delivering great customer service! Call or click for your FREE estimate today!  …

In North Bay Premium Painting we take pride on what we do. Quality is always our top priority, we never skip corners, we take the extra mile to make sure that our clients are satisfied with our work. We have over ten years of combined experience in the trade. We are a small business which means our focus is always on you.  …

As a premier painting contractor, we are committed to delivering customer service that is second to none. We offer a wide range of services to meet your residential and commercial painting needs. Big job or small, we have you covered. We strive to provide honest, reliable, residential and commercial painting services that stand head and shoulders above the rest. We combine the industry's best paint with our passion for detail to exceed your expectations. We work around your busy schedule and consult with you on all aspects of color selection and color coordination for your project to ensure that the project is completed according to your preferences. We want the happiest customers in town!  …

How is MoonDance Painting overall rated?

MoonDance Painting is currently rated 4.3 overall out of 5.

What days are MoonDance Painting open?

No, MoonDance Painting does not offer eco-friendly accreditations.

No, MoonDance Painting does not offer a senior discount.

Are warranties offered by MoonDance Painting?

What services does MoonDance Painting offer?