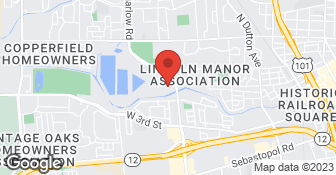 Beal's Moving is a family operated moving business specializing in moves from one piece to a whole household within California. We provide unmatched customer service that includes efficiency, affordability, and care. Let us take the stress out of your move by trusting in a company who has been moving families for over "forty years". If you like that old fashioned personal touch we are the moving company you have been looking for. Please contact us for a free moving estimate at 1-800-755-2325 or visit our web site at www.calmoving.com

Description of Work
We have used five long distance companies over the last 12 years. Beal's Moving is by far the best experience we have had. From estimate to the packing to moving and unpacking, their teams were exceptional. We'll gladly recommend their business.

They were very friendly and they were nice guys, but not that talented as movers. I wouldn't use them again. I would not use them to move a piano. The price was high. The broke a piece of furniture and they didn't let us know that it had happened. I think they knew that we were moving stuff into storage not to move it again for some time, so I really only realized that it had been broken maybe six months after when I was ready to move things out of our storage. I also didn't call them back and give them an opportunity at that point to make good on it, but it seemed like it was so long ago. If I had realized it right after the experience, they might have been willing to acknowledged that it happened and deal with me. There is nothing really to deal with them, but unfortunately it leaves me with a bad taste. It is kind of unfortunate, because I also can't say what they would have done had I called them up, because people make mistakes.

Description of Work
We have used Beal's Moving.

We recently moved from Santa Rosa to Los Angeles because my current employer relocated to LA. After a few Google searches we came across Beal’s Moving company. We were pleasantly surprised by the professionalism displayed by Kimm as she prepared a quote for us. After we called a few other places we decided to go with Beal’s. The movers arrived on time and went above and beyond making sure every thing was wrapped and packed carefully. Our items arrived in Los Angeles without any damage or problems and we were amazed by how quickly they were able to unload everything. If we have to move in the future, we will be sure to use Beal’s moving again.

Description of Work
Moving the items of a four bed room home.

It seemed almost like he was trying to do malicious things. He put my 2 direct TV boxes in to a box and marked it mystery box so I was charged for not having all my cable chords. He came and gave me and estimate and the estimate that he gave me I did not pay in the end I payed more the final cost was approximately 1/3 more than he told me. I do not recommend this moving company. His crew was very pleasant they were very polite and easy to work with.

Description of Work
They came and moved my stuff from one place to another. We were moving the military move.

The member made some complaints about our Company that we feel were unfair and unjustified. What she failed to mention was, that just two days prior to her move she called to say she was way behind and needed help with her packing. Packing was not part of the original estimate, since she said she'd do that herself. In the height of our busiest season and fully booked it came as a surprise but, we were able to send over one man the day before for a 1/2 day and we added a third man on her moving day, to help finish the remainder of her packing. It turns out we bid the job for two men 8 hours and that portion of the job came in at 8 1/4 hours. The rest of the bill consisted of packing labor and the materials used to accomplish that task. The extra charges were created by her not Beal's Moving. We were glad we could accommodate her on such short notice. She also accused us of marking a box "Mystery" seemingly on purpose, to somehow make her life miserable. We believe she misunderstood what they marked the box as; which we believe read "Misc" indicating the items in the box were unrelated to one another. Why would we do that sort of thing? The truth is we wouldn't. After all, our customers and reputation are very important to us.You don't earn a A+ Rating with the Better Business Bureau by messing with people and deliberately trying to make their move difficult. The member rate us F on everything but again admitted, and we quote "His crew was very pleasant and easy to work with" Wasn't it Abraham Lincoln who said "You can't please all of the people all of the time?" We certainly try, but guess there are some people who fail to take responsibility for their own actions and who fail to show gratitude for an excellent move.

When you think of Bekins, you think, "This is moving." For more than 120 years, families like yours have trusted Bekins Van Lines to move them. Bekins has the experience and expertise you need to get you to your new destination smoothly and efficiently. New home, new community, new friends – moving can be an overwhelming experience. At Bekins, we understand the anxiety and stress of moving and we’re there to make it easier, every step of the way. You’re not alone when you move with Bekins as our process is designed to assist you throughout your entire relocation. It’s a process that offers you choice, flexibility and control. With a network of more than 370 agents across the country, Bekins can provide a variety of services including free estimates, storage, packing, loading, unloading and hauling in order to meet your individual moving needs. We can help you design a plan that fits your budget. From the salesperson that gives you an estimate to the driver that loads your belongings, you can be sure they’re equipped to handle the job. For more than a century, the Bekins name and reputation have made Bekins the mover that generations of families have trusted.  …

First Plan moving leads by Integrity, Quality fast-paced service, and Customer care. For the amount of time and labor including great-reliable prices, FPM is ready for your project. Please call our office at 1(925)430-9684 to schedule YOUR FREE quote. All jobs will start at the minimum of 2 hours.  …

We are a family-run moving company, servicing local or long-distance moves, residential or commercial. Our services include packing & unpacking, labor-only moves, senior moves, furniture pick-up & delivery, furniture assembly/disassembly, and junk removal. We have more than 10 years of moving experience, although our company started at the beginning of the Covid-19 pandemic. My brother-in-law (my business partner) and I both have worked under multiple moving companies around the Bay Area, CA until we finally decided to start our own moving company in 2019. As an owner-operated company, you can be sure your move will be handled with maximum care. We are very personable and we like to have fun as we’re working smart, efficient and fast. Our crew has unparalleled chemistry. We work synchronously, with the same mission in mind; and that is to treat our customers like family and their belongings like it's ours. Our work truly speaks for itself! Do not hesitate to contact us or visit our website if you want to learn more about our services and our competitive pricing.  …

Insured
All statements concerning insurance, licenses, and bonds are informational only, and are self-reported. Since insurance, licenses and bonds can expire and can be cancelled, homeowners should always check such information for themselves.To find more licensing information for your state, visit our Find Licensing Requirements page.
General Information
Free Estimates
Yes
Eco-Friendly Accreditations
No
Payment Options
Check, Visa, MasterCard, Discover
Senior Discount
NO
Warranties
No

Full service local and long distance residential moving within California.Harry Beal the owner, is on most long distance moves. We also offer full service packing office moving and we are Piano specialists.

How is BEAL'S MOVING overall rated?

BEAL'S MOVING is currently rated 3.3 overall out of 5.

What days are BEAL'S MOVING open?

No, BEAL'S MOVING does not offer eco-friendly accreditations.

No, BEAL'S MOVING does not offer a senior discount.

Are warranties offered by BEAL'S MOVING?

No, BEAL'S MOVING does not offer warranties.

What services does BEAL'S MOVING offer?

Are there any services BEAL'S MOVING does not offer?