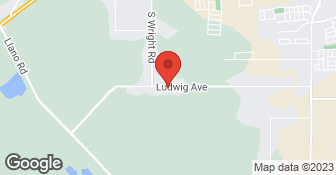 I have had good service with Atlas Tree service. Their price can vary. It depends upon the size of the job. If its a big job, they charge adequately. They charge generously with the small job. This was a huge tree. Their price is ok. They aren't cheap, but I will pay for service that is good. I have hired a lot of tree people. I have stuck with them, because I rate them high on all categories. Every time you call them, they are very nice on the phone. They are very nice people too, which is very amazing. I am going to have them come out, but I haven't decided when.

Description of Work
We had a huge we tree trimmed. A huge pine.

They were very thorough, cleaned up after the job. Very clean, very quick and very professional. I plan on having them back again. I took a lot of time and effort in reviewing and estimates from a variety of companies. They were the best. They met every requirement and were definitely in the ballpark with the estimate.

Description of Work
They came out and removed a fallen oak tree. The tree had fallen and they chipped the limb debris, hauled the big wood offsite. They also cut down other dead/fallen trees on my property and have cut down other trees in hazardous areas. As arborists they've been able to assess my tree's needs.

Description of Work
Great experience. I have recommended to others and they were satisfied as well

They arrived on time with a crew of 3 and completed the work in about 2 hours. One guy was in the tree cutting limbs and trunk from the top down. Another guy was on the ground assisting and bring the downed limbs to the third guy at the chipper. They left me some nice firewood and cleaned up well.

Description of Work
Removed 2 oak trees about 2ft in diameter and trimmed the other trees around my houes.

It was a good experience. The price was right. The person they sent out to do the original survey was excellent. They were a really good source and I will use them again for sure. I compared their price and it was shocking; I couldn't believe the difference. Another one was unbelievably expensive and not very good. Their price was very competitive. I would have liked the rounds to have been cut smaller but that could have been my husband's fault. They were a really good company and they were close to us. They were always consistently professional and nice, which was cool. I've called them 3 times.

Description of Work
A tree had fallen over by itself so they cut it into sections and chipped some of it and left some of the rounds for us to use for firewood.

The whole experience was good. Matt ho who does the quoting arrived on time to do a quote. I told him that I wanted to have the silver dollar eucalyptus removed from my front yard. Matt took notes and said he would have a quote within a day. The next day I got the quote and I called and set up an appointment to have the tree removed. (I did get other quotes, but I went with Atlas because they were in Angie's list. So I figured they must be doing a good job) They were also the most reasonable. The date to have the tree removed was set at about a week out. On the day that the Atlas crew was to arrive, and this was from 11:00 - 11:30 a.m. , Matt ho even called to say that they might be a little late due to some last minute changes that had to be made. (nice touch keeping you informed) I said no problem. As it turned out the Atlas crew got here pretty much on time. Upon arrival I talked with the person in charge and told him about my concerns when they were cutting the limbs and branches. I didn't want my bushes crushed, or my windows broken, or my sprinkler heads smashed by falling limbs, and watch out for my rain gutters. ( I knew that they would be careful in these areas but it made me feel better to mention it) As soon as the man in charge knew what I wanted, he told the rest of the crew right away before they started to work. Now this was good. Now the entire crew was on the same page. Once the work started they worked like professionals from start to finish. There was no yelling profanities, goofing off, or loud radios playing. I like that. Get in, do the job, and get out. After the tree cutting crew was done and cleanup was done, the tree stump grinding guy ground the stump down to about 4 - 6 inches below the surface. He also ground down some roots that were exposed in my lawn. I thought I was going to use the wood chip mulch in my flowers and garden. But I decided against that. So the day after I called Atlas to ask them if their crew was in the area could they come and pick up the wood chip mulch grindings, as I was not going to use it after all. They said no problem. Now this was a day after the job. So to sum it up, Atlas has got my vote. And yes, I would recommend Atlas Tree Surgery Inc. to have your tree removed.

Description of Work
Removed a silver dollar eucalyptus from my front yard. Cut the tree down to the stump and ground the stump out to. Then do a clean up and haul all the limbs and leaves away.

They were very nice and the service was excellent. They were punctual and had good teamwork. They cleaned up well after they finished.

Description of Work
I have used Atlas Tree Surgery Inc for tree service. They took down three big redwoods trees for me.

The experience was good from the first call to the completed project. All employees were very nice and easy to communicate with. The estimator was experienced and it showed. The actual workers who came out to do the job were very nice, came a little early and said they would wait to start if it was an inconvenience, but it was fine so the job got done earlier. The job was completed in a short time and my husband and I are very satisfied with our experience with this company. WeI will hire them again.

Description of Work
Cut and chipped a fallen acacia tree.

They were excellent in every respect. I had a slight problem with them not taking enough off of the olive tree, but after a phonecall to the person who had done my quote, they arranged to come out and finish the job for me a couple of days later. Clean up was good and the staff was efficient and polite. Always asked me before clipping branches that might interfere with the privacy factor of my yard. I appreciated that.

Description of Work
Contacted this provider to cable our multi trunk redwood tree (huge), and trim and clean out our olive and magnolia trees. They also got rid of a medium sized privet that had grown to close to the fenceline.

They were really fast. The tree was already down by the time that I got home from work. They were also very clean. They swept the patio and I couldn't even tell they had been there. Also, the tree was hanging over the neighbor's yard and they even went around to her yard and cleaned it up as well.

Description of Work
They removed a 60' tree from my yard.

This company was A+ in all categories. The workers arrived on time, began work immediately, were very polite/respectful, listened to input and followed through, trimmed and shaped the trees beautifully, cleaned up the yard thoroughly, and followed up with a phone call shortly thereafter.

They were very knowledgeable, helped to decide which way to go - rather than to save the tree or remove it. They gave some guidance. They seemed very professional and at a decent price.

Description of Work
Atlas Tree Surgery Inc gave me an estimate for removing a tree.

It went as great. They know what they are doing and they do it. I went to work and when I came home the work was done and everything was left clean and neat.

Description of Work
This is the 2nd time in 3 years they have performed work on trees at my home. This time they removed a large limb from a neighboring tree, trimmed an apple tree that had gone wild and trimmed my birch tree in front away from the house and driveway.

Brad Sayre Landscape Services is a family owned and operated business who proudly serves Sonoma County. Brad moved to northern California in 1980 and has been provided quality landscaping, hardscaping and lawn maintenance ever since! services include paver walkways, new sod lawns, valves and irrigation, installation of trees plants and flowers, water features, pathways , bark, fences and gates, artificial turf, mini golf courses, retaining walls. we do not install anything concrete or red bricks and mortar or tree removal. He is experienced in both agriculture and horticulture services as well. California State licensed and bonded.  …

We are a locally owned and operated company that values honesty and integrity and treats your home as if it were our own. We have many years of experience to give you confidence that we are your number one choice for your next home project. You will find us to be competitively priced with close attention to the details. We look forward to building a lasting relationship and guarantee your satisfaction!  …

Atlas Tree Surgery Inc is currently rated 5 overall out of 5.

No, Atlas Tree Surgery Inc does not offer a senior discount.

No, Atlas Tree Surgery Inc does not offer warranties.

Are there any services Atlas Tree Surgery Inc does not offer?